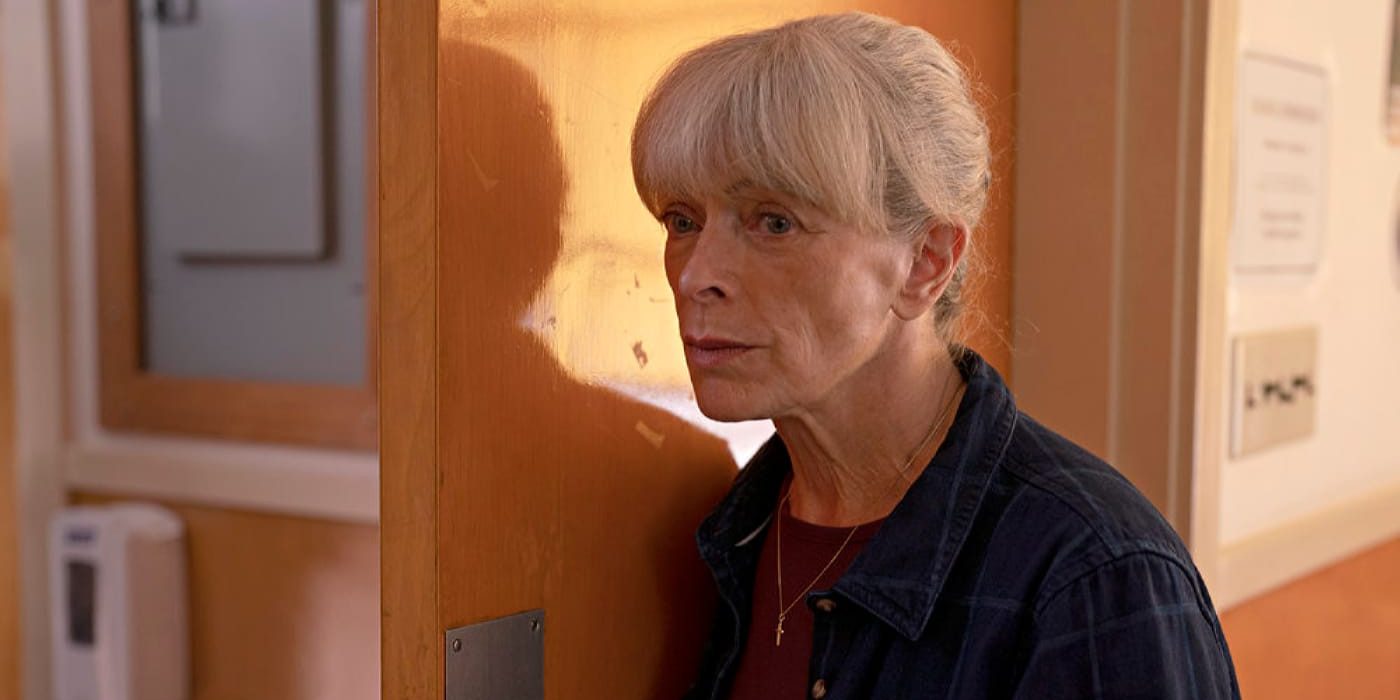 ‘The Sinner‘ season 4 takes a surprising new turn in the sixth episode after the death of Brandon. The plot thickens as Harry must now investigate not one but two murders. His problems are aggravated when Homicide Detectives from Portland arrive to investigate the case. Meanwhile, Harry and Meg try to find as much information as possible. In the process, Harry uncovers a life-threatening clue. We are sure viewers must be curious to find out the implications of Harry’s discovery. Here’s everything you need to know about the ending of ‘The Sinner’ season 4 episode 6! SPOILERS AHEAD!

The sixth episode, titled ‘Part VI,’ opens with Harry examining Brandon’s dead body. He finds a pack of nicotine gum on the body. He discusses his findings with Meg and believes that Brandon’s death is somehow connected to Percy. Homicide detectives from Portland arrive to investigate the case and arrest Mike Lam on suspicion due to his feud with Brandon. Harry arrives at the police station and tries to interject, but Raskin silences him. Harry warns them that they are wasting time by interrogating Mike.

Harry and Meg talk to Brandon’s wife and mother. Brandon’s wife tells Harry that Brandon often cheated on her, and his crewmate, Rafa, regularly covered for him. In a flashback, we see Percy arguing with Meg about their family’s effect on the island’s natives. In the present, Harry speaks to Rafa and learns that one day Brandon called him for help. Rafa saw Brandon with a woman who was hurt. He helped the woman and found a ring nail in her wound. Brandon sent Rafa away after Percy showed up.

From CJ, Meg learns that Brandon was involved in some shady business with Meg’s sons. In a flashback, we see CJ following Brandon to a shipyard where two men beat up Brandon. Meg tells Harry that the shipyard belongs to her family friend, Don. Harry heads to investigate the shipyard while Meg questions Don. Harry’s search for answers lands him in serious trouble.

The Sinner Season 4 Episode 6 Ending: Is Harry Alive? Who Attacked Him?

At the shipyard, Harry searches for clues when he sees a ship named Valerie. The name was scribbled behind the Celtic star Percy was carrying when she died. Harry promptly investigates the docked ship. Onboard, he is greeted by a foul smell and a swarm of flies. He sees a make-shift video recording setup, bunk beds, and scattered clothes of children on the ship. He calls Meg, but the poor connection interrupts their conversation. A bullet is fired at Harry, and the detective realizes that he is in danger. Harry is forced to run for his life. He evades his assailants and hides in the woods but is critically injured. Before the shooters can finish off Harry, he is saved by Meg. In the end, Harry lives.

Harry’s attackers are the same two people who roughed up Brandon. One of them is also sporting a red raincoat which means he could be the same person who ransacked Harry’s house. This suggests that Harry’s instinct is once again correct, and Percy’s killer is trying to cover their tracks. We get evidence of this as Harry’s attackers burn down Valerie in the closing moments. We also see Sean calling and informing someone that Meg brought Harry to their home. Thus, CJ’s allegation that the Muldoon brothers are involved in some shady business also appears to be true. All of this seems connected to Don, an influential man in the local community, who could be behind the murders. However, there is clearly something strange going on at the shipyard, and we can only hope Harry will get to the bottom of it.

What Is Mike Hiding?

In the episode, the police apprehend Mike Lam and interrogate him over his supposed involvement in Brandon’s death. The police’s suspicion isn’t unfounded, as Mike and Brandon had a feud because they were both in the fishing business. Brandon often created trouble for Mike, and that is motive enough for the police to question the latter. However, Harry knows something is amiss as things are usually much complicated than they appear in cases such as the one at hand.

The situation becomes more complex because Mike is hiding something from everyone. When Mike’s wife arrives at the police station to see him, she implores him to tell the truth, or it could make matters worse for them. Although Mike considers telling the truth, it isn’t revealed, just what he is hiding. Whatever it is could provide new insights into the shady activities going on at the shipyard and, in turn, help prove Mike’s innocence.