‘The Sinner,’ despite being a mystery series, thrives on exploring the nuances of a criminal’s psyche. All the cards are laid out in front of us early on, and it is up to Detective Harry Ambrose to bring the criminals to justice. However, like the rocky waters of its seaside setting, the fourth season also continues to shake things up with new revelations making it difficult for Harry and the viewers to get a grasp of the Hanover residents’ motivations.

In the third episode of the season, Harry investigates further into Percy’s time away from the island. He learns some shocking truths that complicate the case and bring out the worst in Harry. The episode ends on a perplexing cliffhanger, and we are sure viewers must be looking for some clarification about the same. Here’s what happens at the end of ‘The Sinner’ season 4 episode 3 and what it means for Percy’s fate. SPOILERS AHEAD!

‘The Sinner’ episode 3 opens with Harry following Meg as she travels to the mainland. He sees Meg meeting with a man at a construction site. After collecting a package from the man, Meg visits a woman. The woman asks Meg to leave, and Harry arrives at her doorstep shortly afterward. The woman is Percy’s mother, Risa, who has remarried and moved on. However, from Risa, Harry learns that Percy visited her mother after moving away from the island a year ago. 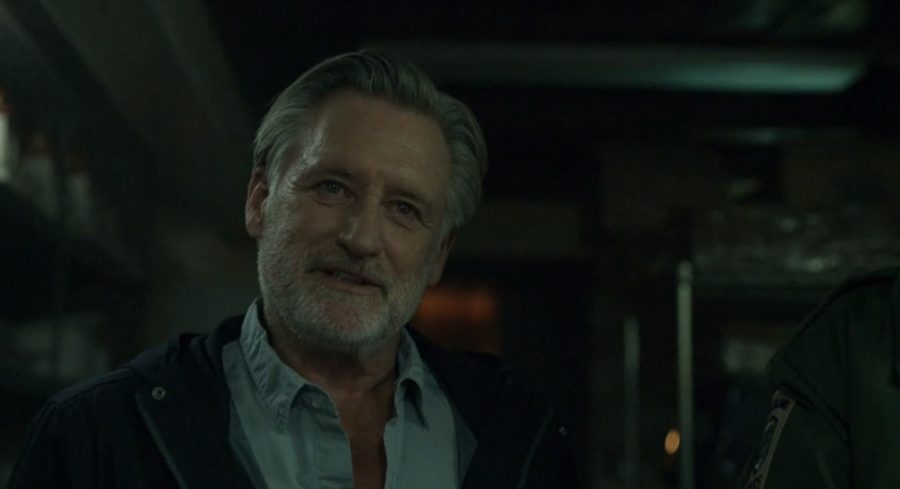 Harry tracks down Percy’s roommate, Caroline, and asks her about Percy’s time on the mainland. Through flashbacks, we see Caroline revealing that Percy was a charming girl but sometimes acted weird. She worked at a clothing store with Caroline, but one day a mysterious man came looking for Percy. After that, Percy began to spiral out and wouldn’t leave the apartment. Caroline forced Percy to go clubbing. At the club, Percy once again saw the hooded figure and left. By the time Caroline arrived at the apartment, Percy was gone.

Harry returns to the island with these newfound revelations and decides to confront Meg about her lies. He asks Sonya to accompany him. The couple talks to the Muldoons over dinner. Harry accuses Meg of forcing Percy to return to the island. Meg insists that Percy wanted to return home and wasn’t forced. Harry speaks to Meg privately and asks why Meg lied to him about the last time she saw Percy. However, Harry is forced to leave after Percy’s father, Sean, and uncle, Colin, get into a brawl.

The Sinner Season 4 Episode 3 Ending: Are The Muldoons Responsible for Percy’s Disappearance?

Near the episode’s end, Sean arrives at Harry’s house and reveals the truth about the night of Percy’s disappearance. Sean admits that his family saw Percy later that fateful Saturday night. Percy confronted Sean about his drug use. Sean also reveals that he drove Percy’s car to drug dealer Diez’s place that night, and Meg lied to protect him. When Harry asks Sean if he thinks Colin had something to do with Percy’s disappearance, Sean says that the two were close but stops short of revealing the entire extent of their relationship.

Sean reveals, coupled with Meg’s statements, portray the Muldoons in a sympathetic light. The family is trying to keep their business afloat while also protecting each other’s secrets that will only harm their already waining image in the town. Earlier in the episode, we also see a flashback to the moment Percy called Meg for help and expressed she wanted to return home. Thus, it is seemingly confirmed that Meg did not bring Percy back against her wishes. All things considered, it is possible that the Muldoons did not have any hand in Percy’s disappearance.

Whose Dead Body is on the Beach?

In the episode’s final moments, we see a tourist couple enjoying their time on the beach. Just a few feet away from them is a dead body that seems like it has recently washed onto the shore. While we do not see the face, the clothes are similar to those worn by Percy. The fact that it was Sean and not Percy driving the car later that night seems to credit that Harry indeed saw Percy jumping off the edge.

However, it is suspicious that the body turned up much later despite the local police conducting extensive searches. The ending shot reiterates that Harry’s gut feeling wasn’t wrong when he insisted that the tides might have driven the body further away from the shore. It is a neat moment that underlines Harry is miles away from uncovering the truth about what happened to Percy.