Where Was Tirdy Works Filmed? 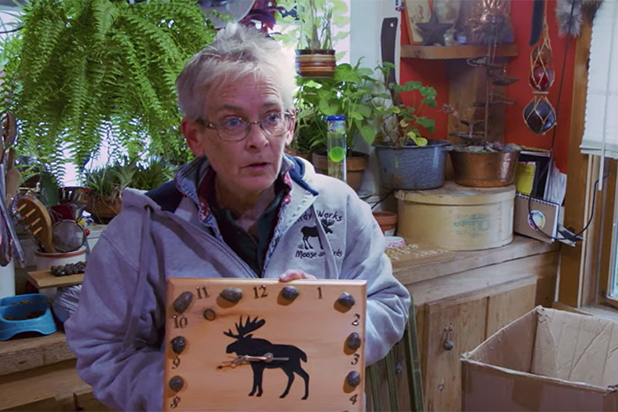 ‘Tirdy Works‘ takes the term ‘create, don’t hate’ to a wholly different level, as we see a woman managing a unique business. Mary Winchenbach went viral when she explained in a video from the Common Ground Fair how her products were made from moose droppings. Soon enough, she was invited onto ‘Tosh.0,’ and by this time, her business was growing exponentially with more employees on the roster.

Mary has managed to make us laugh while acquainting us with a small business in an even smaller town. It is a tale of how the local community rallies around her to help her keep the business growing. Now, in ‘Tirdy Works,’ Mary’s life is captured in a reality television show. We see how making Tirdy Works a viable business becomes Mary’s priority. She has to deal with an ultimatum from her partner, Deb. If Mary is unable to make profits off Tirdy Works by the end of winter, then she has to throw in the towel.

Since ‘Tirdy Works’ is a reality show, it has been filmed on location. Naturally, you might be wondering where Mary’s business is, and where different parts of the series have been filmed. We have got you covered in that regard.

Where is Tirdy Works Filmed?

The reality show is concerned with Mary’s life, but more importantly, her business, Tirdy Works. Accordingly, a significant chunk of the series has been filmed on location at Mary’s house and the shop. Mary’s house is on Patricktown Road in Somerville, and Tirdy Works’ is located in Somerville, Maine. The series serves to show the quirky side of Mary’s life, but also the benefits of the business in relation to the small-town community.

WarnerMedia Entertainment’s news release confirms that the series is filmed in Somerville, as they’ve said, “At first glance, Mary’s a no-holds-barred, blue-collar risk-taker. But deep down, she cares most about making people happy, providing jobs, and helping everyone lighten up. Mary has to figure out how to increase production, plan for expansion, cope with growing pains, and pull the locals of Somerville together.” You can also check out a post below, confirming the filming location as well.

Mary was followed around town by the reality television crews, and she was filmed at the Somerville Fire Station, at 93 Highland Avenue. The Somerville Fire Chief Mike Dostie is one of the many townspeople rooting for Mary’s business to succeed. The filming took place in October 2019, and the crew interviewed residents and Somerville’s newly famous resident. At the venue, Mary interacted with the audience and showed them a gigantic box of moose turds.

As is evident, the unique premise of ‘Tirdy Works’ has already started to draw attention. The reality series has filmed entirely on location, taking us deep into the Maine community to understand Mary’s business motivations and how the town supports her.