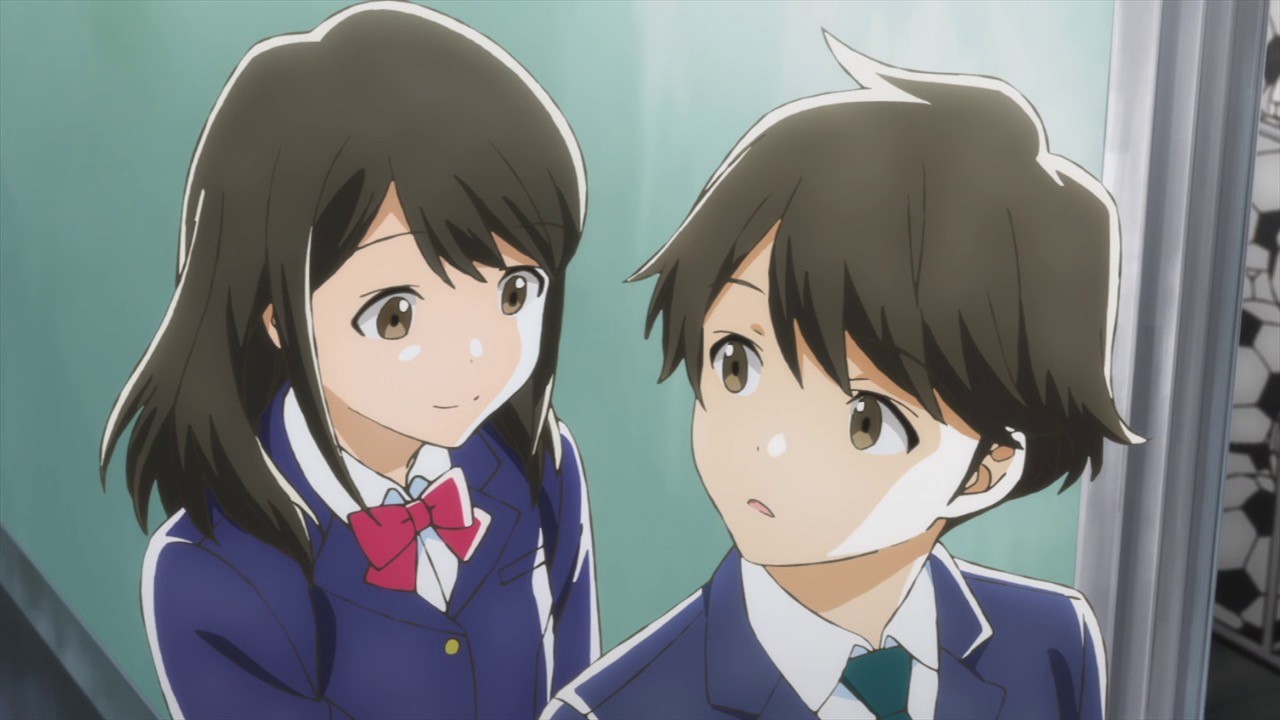 School life is a widely exploited genre in the world of anime and everything from high-school mysteries to supernatural school adventures have been repetitively portrayed in many shows. While ‘Tsuki ga Kirei’ does the same, it excels with all the simplicity that it offers and does not pretend to revolutionize itself in any way. It takes a very simple approach towards showing the complications that arise in pretty much every relationship. And to do this, it uses the perfect combination of deep dialogues, gestures and facial expressions without exaggerating the reactions of the characters in different situations. Despite being a 12 episode show, it subtly transitions from one moment to another and gradually develops the romantic relationship of the characters by emphasizing on the details only when necessary.

The secondary characters receive enough screentime for their contribution to the story. Some of them even directly contribute to the relationship between the main characters. The art of the show is uniquely beautiful and the soundtracks just add a lot more feel to every single scene. There are scenes that have no background scores at all to put more emphasis on the sound effects. Just like the story, even the music of the anime stands out because of its sense of minimalism and simplicity. Overall, the anime has a very well-structured romance story that gives you a warm mushy feeling and at the same time brings in a speck of reality. Anyone who is thinking of watching it now, my advice would be to dive right into the whole experience and emotion that the anime offers. ‘Tsuki ga Kirei’ is a highly recommended anime to anyone who is looking for some novelty and an absolute marvel of school romance. Undeniably, this anime is a gem amongst all the other similar shows and should not be missed out by anyone.

Tsuki ga Kirei Season 2 Release Date: When will it premiere?

‘Tsuki ga Kirei’ Season 1 premiered on April 7, 2017 and went on till June 30, 2017, airing a total of 12 episodes. The anime actually has an above average rating and most anime viewers had some really great things to say about it soon after its release. Also, being an original anime, it does not really matter if it has a source material or not because in this case, the creators get to decide how they want the story to move forward. All of this seems to be in favor of a season two. In fact, the creators would actually be missing out on a great opportunity if they chose not to go for its renewal now, considering the hype around it.

The only thing that is not in the show’s favor is the fact that the first season had a pretty conclusive ending. But then again, being an original, the creators can still go for either a continuation or a whole new story. While there have been no official confirmations regarding its renewal, many sources have been suggesting that ‘Tsuki ga Kirei’ season 2 will be released somewhere around April 2020. But as long as the news is not official, we cannot be too sure about the genuineness of these speculated dates. Speaking of which, as soon as we get any confirmed news regarding this, we will update it right here in this section.

The English Dub of ‘Tsuki ga Kirei’ Season 1 is available on Funimation and Amazon Prime. You can also stream it on Crunchyroll with its original Japanese audio and English subtitles.

With a new school year, students get to be in new classrooms with a whole new group of kids. It is the final year at Junior High and this is when an aspiring writer named Kotarou Azami and the track team star Akane Mizuno end up in the same class. Initially, they barely even know about the existence of each other but a few close encounters bring them close and that’s when a spark is ignited somewhere deep inside their hearts. Fate itself seems to be in their favor and with a few heart-fluttering moments, they get closer than ever.

But soon after they fall in love, they come face to face with all of the realities that come with it and realize that it is not as straight forward and simple as they thought it would be. Though they absolutely love being with each other, the feelings of anxiety that come with this just cannot be ignored. The closer they get, the more insecure and uncertain they start to feel about what’s truly inside the heart of their partner. Even though the road ahead seems to be unclear, Kotarou somehow gathers the courage to ask just one question to Akane under the dim yet beautiful moonlit sky. This one question forever changes everything for the two of them and their relationship.

Kotarou Azumi is one of the main characters of the series who is a student of class 3-1 and belongs to the literature club. He aspires to be a great novelist someday. He has brown eyes, brown hair, and a very fair complexion. He does not really care about how he looks and usually keeps his hair all messy. His male classmates are full of energy and most of them are quite outgoing. but unlike them, he is very calm, composed and usually keeps to himself.

Being a writer, most of his thoughts are very philosophical and most kids his age would not even be able to understand them. That’s probably the reason why he chooses to be quiet and only speaks to the people who are really close to him. His seclusion has made him shy and he fails to make eye contact with most people. Even when he does talk, he often gets anxious and runs out of words to say. He likes to be seen as a mature and thoughtful person when he is in public but when he’s alone, he tends to reveal his childish side.

Takumi Hira is an all-rounder who does really well at studies and is known for being the captain of the track team. He has dark blue eyes, black hair and is often seen in a typical Japanese school uniform. Though he is highly popular in school, he is really kind and is passionate about running. He also gets a lot of attention from the girls of the school but he turns all of them down because he is in love with Akane. He has felt this way about her since ages but never really got around to tell her about it.

Akane Mizuno is the female protagonist of the show who is a part of the school’s track team and is a student of class 3-1. She has black hair and maintains a typical hairstyle but despite being so simple, a lot of guys have a crush on her and consider her to be really beautiful. When it comes to one on one interactions, she is very vibrant and active but while in crowds, she gets really nervous and often feels extremely shy. She keeps a purple doll with her at all times and every time she feels stressed, she scratches this purple doll to feel better. She feels really comfortable around her close friends and is very open around them. She is also close to her sister and has a great time whenever she is with her. Though she is quite shy, she is determined to overcome her social anxiety and tries to do this by exposing herself to various social situations.

Chinatsu is another sprinter from the track club of the school, who is a student of the 3-2 club. She is Akane’s best friend and also develops a crush on Katarou even after knowing that he is already with Akane. She has brown eyes and really short brown hair. She is a social person who enjoys participating in school activities. She also laughs a lot, especially when she is trying to make her friends laugh at her own jokes. She is one reason why Akane and Katarou end up being together as she really helps them during the initial stages of their relationship. At times, she even gets jealous of Akane’s relationship and cries about it; but then she somehow manages to support them later.