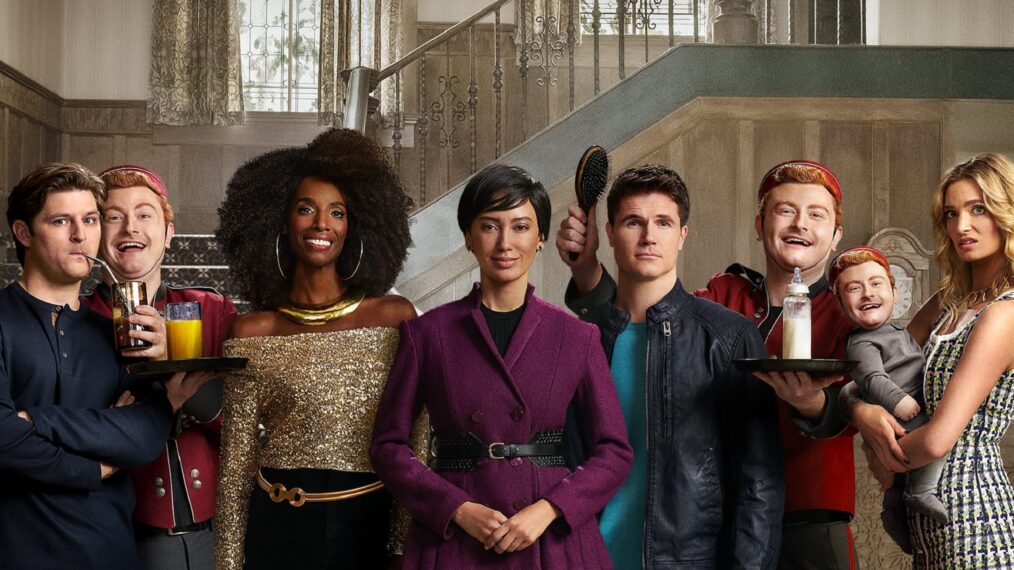 Amazon Prime’s ‘Upload’ returns for a surreal season 2 with the real world and the capitalism-controlled afterlife world of Lakeview colliding like never before. The mystery at the center of the quirky sci-fi series is also getting bigger, with some pretty ominous repercussions. The Ludds are back in force, and Ingrid takes her obsession with Nathan to a whole new level, even as our hero tries desperately to work things out with Nora. There’s a lot that goes down in ‘Upload’ season 2 so let’s jump in without any further ado! SPOILERS AHEAD.

Season 2 opens with Nora and her father, Dave, escaping into the forest and joining the Ludds, an anti-technology group bent upon stopping the capitalist hold on the afterlife industry. Under the severe Pastor Rob, who thinks all Uploads are abominations, the Ludds carry out attacks on companies that offer exorbitant afterlife solutions for the wealthy. Nora becomes a reluctant participant of the community and helps them take down a storage facility used by the uber-rich deceased to store their physical bodies. However, as a disastrous “Download” experiment has proven, it is still impossible to transfer someone’s consciousness from an afterlife facility back into a body.

Meanwhile, Ingrid becomes an Upload and rescues Nathan from the 2 Gig section, where he relegates himself at the end of season 1. The relationship remains bumpy as ever, and Ingrid is now fixated on having a “digital baby.” However, it is then revealed that she is merely using a Hug Suit and pretending to be an Upload, which explains why she keeps zoning out. During her time at Lakeview, it also becomes an open secret that she helped her father, Oliver Kannerman, kill Nathan after the latter sold his code to the father.

Things get a little heated at the idyllic afterlife simulation after the Ludds successfully attack the facility, prompting the company to put in strict new measures. The show takes another hilarious swipe at capitalist greed as Horizen then begins scanning Lakeview residents’ thoughts and dreams under the guise of safety measures. Of course, the ironically soul less afterlife company also begins selling its residents’ dreams, with some of the more sexual ones landing up on “Dreamhub.”

Upload Season 2 Ending: Does Nathan Die? Does His Head Explode After the Nosebleed?

The season 2 finale is a dramatic flurry of plot twists. Ingrid, hoping to convince Nathan to have a real baby with her, reveals that she is regenerating his body in the hopes that Downloads will someday become successful. She also reveals she’s been using a Hug Suit this whole time to pretend to be an Upload, at which point Nathan finally breaks up with her. He then rushes off to try and stop the sinister new Freeyond service, which promises to be a free afterlife service for the poor but is actually part of a bigger scheme to swing national elections.

Nora enlists the help of the Ludds to try and stop Freeyond, which requires Nathan to Download into the body Ingrid has been growing for him. A brief standoff later, Nathan’s consciousness successfully transfers into his body. Ingrid, furious at having her plan foiled, returns home and pulls out a hair from Nathan’s old hairbrush, promising to take what’s hers. Meanwhile, Nora and Nathan finally get some alone time on the train back to New York. However, as the season closes, Nathan notices his nostril beginning to bleed.

And so, season 2 closes on an ominous note, with the protagonist’s head possibly seconds away from exploding. So far, all previous attempts to Download have resulted in the subject’s head gruesomely blowing up, be it human or birds (yes, that’s why the pigeon’s head unexpectedly explodes). Thus, one of the show’s most heartwarming scenes — that of Nathan and Nora finally getting some romantic time together — might just end with the latter waking up to the sound of the former’s head exploding.

As awful as it sounds, considering previous experiments, there is a high chance that Nathan, or at least his current body, is going to die. However, the show isn’t dark enough to brutally kill off the protagonist, so there might be a few ways in which Nathan could be saved. For one, the technology used to Download him into his body has been acquired from the Grey Zone (a rather obviously named grey market). Thus, there could be a glitch in the system that could stop Nathan’s head from exploding.

The most important detail about Nathan’s fate, however, might just be at Horizen’s offices in New York, where the nervous temp, Tinsley, has just discovered that our hero is missing from Lakeview. On the advice of a senior employee (and to avoid getting fired), Tinsley has begun to secretly generate a backup version of Nathan within Lakeview. As not too much time has passed since the potentially disastrous Download, the restored backup version will likely have all the memories of Nathan until that point.

Thus, even if the current Nathan dies (which is highly likely, and it wouldn’t even be the first time we see the protagonist’s head explode), another version will be present in Lakeview, waiting to take his place. Though we don’t know how this will affect his memories or what Nora’s feelings for the restored version will be, at least we can be sure that this isn’t the end of Nathan.

Do Nathan and Nora Stop Freeyond?

To put it simply, no, Nathan and Nora are quite far from stopping Freeyond. This is all the more dramatic as the former’s mother, Viv, plans on Uploading herself into the sinister new free afterlife service. The last that we see them, Nathan, Nora, and the Ludds are on their way to the Freeyond office, where they plan to use Nathan’s retina as a password to break into the service’s code (which was written by Nathan).

However, the plan might come gruesomely undone if Nathan’s head explodes, as seems to be strongly hinted in the season’s closing moments. Of course, there is a chance that Nathan doesn’t die, or (not to get too gory, but) the group manages to salvage an eyeball and use it to break into Freeyond. There are also other ways in which Nathan could help stop Freeyond even if his head explodes.

The most obvious step would be to have his backup version transferred from Lakeview to Freeyond and try to disrupt or fix the system from the inside (and possibly save his mother). However, at the end of season 2, Nathan and Nora merely know of Freeyond’s sinister plan and are nowhere close to stopping the company from potentially swinging elections by Uploading large sections of the less-than-wealthy populace.

What is Ingrid Planning to Do with the Hair?

Ingrid is last seen pulling a hair out of Nathan’s old hairbrush, and it is quite obvious that she means to use his DNA. She could be planning to use it to make another clone of Nathan since she has made it quite clear that she will stop at nothing to have her reluctant ex-boyfriend in her life. However, Ingrid could also plan to use Nathan’s DNA to fulfill her dream of having a child with him. As the digital doctor earlier pointed out, if Nathan’s DNA is part of the child, he is also financially liable for it. Thus, using the DNA from his hair could be another one of Ingrid’s schemes to control her ex-boyfriend.

It’s interesting to note that, unbeknownst to her, Ingrid might just be saving Nathan’s life. The closing moments of season 2 leave us with a lot of questions but also offer some clever hints. If Nathan’s head does explode, all the pieces for his recovery are in place. While Tinsley, the Horizen temp, is creating a backup version of Nathan’s consciousness, Ingrid has conveniently opened a path to recreate his physical body. Thus, even as our hero faces potential death, both his mind and body are already at varying stages of being recreated.

Read More: Do Luke and Aleesha Get Together in Upload Season 2?