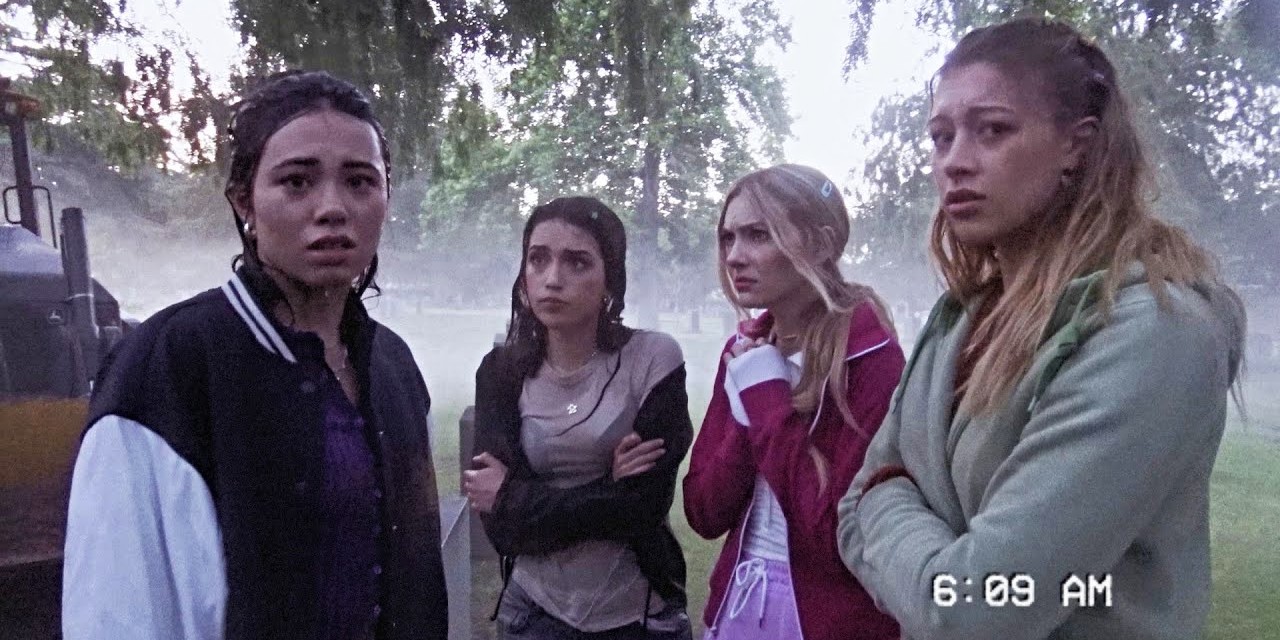 Shudder’s ‘V/H/S/99’ is a found footage horror film presented in an anthology format. It is the fifth installment in the ‘V/H/S’ film series and features five individual short segments, each with its own unique and horrifying experience. The shorts are directed by Johannes Roberts, Vanessa & Joseph Winter, Maggie Levin, Tyler MacIntyre, and Flying Lotus.

The movie follows a VHS tape belonging to a teenager containing footage of various paranormal events from 1999. Therefore, viewers must be looking for an explanation for the film’s gory, violent, and psychologically twisted events. In that case, here is everything you need to know about the ending of ‘V/H/S/99.’ SPOILERS AHEAD!

The first short in the film is titled ‘Shredding,’ and it is directed by Maggie Levin. It follows Rachel, Ankur, Chris, and Kaleb, collectively known as the punk rock and prank group R.A.C.K. The group records various videos of themselves performing music and pranks. For their next video, the band decides to verify an urban legend about the band Bitch Cat, who died under mysterious circumstances at an underground venue. Rumors say that the band members were trampled by their fans after a fire broke out, leading to their death. Since then, the venue has been abandoned and believed to be haunted.

Shredding Ending: What Happens to R.A.C.K?

In the film, the members of R.A.C.K. arrive to examine the venue where Bitch Cat band members died a few years ago. They have all heard the haunted stories about the place and wish to see whether the band’s spirit still lives inside the venue. However, as per their usual pranking tendency, the group starts tricking and tormenting Ankur, who is scared of ghosts. Soon, R.A.C.K. prepares for the night’s main event and performs one of Bitch Cat’s songs on the very place they died. 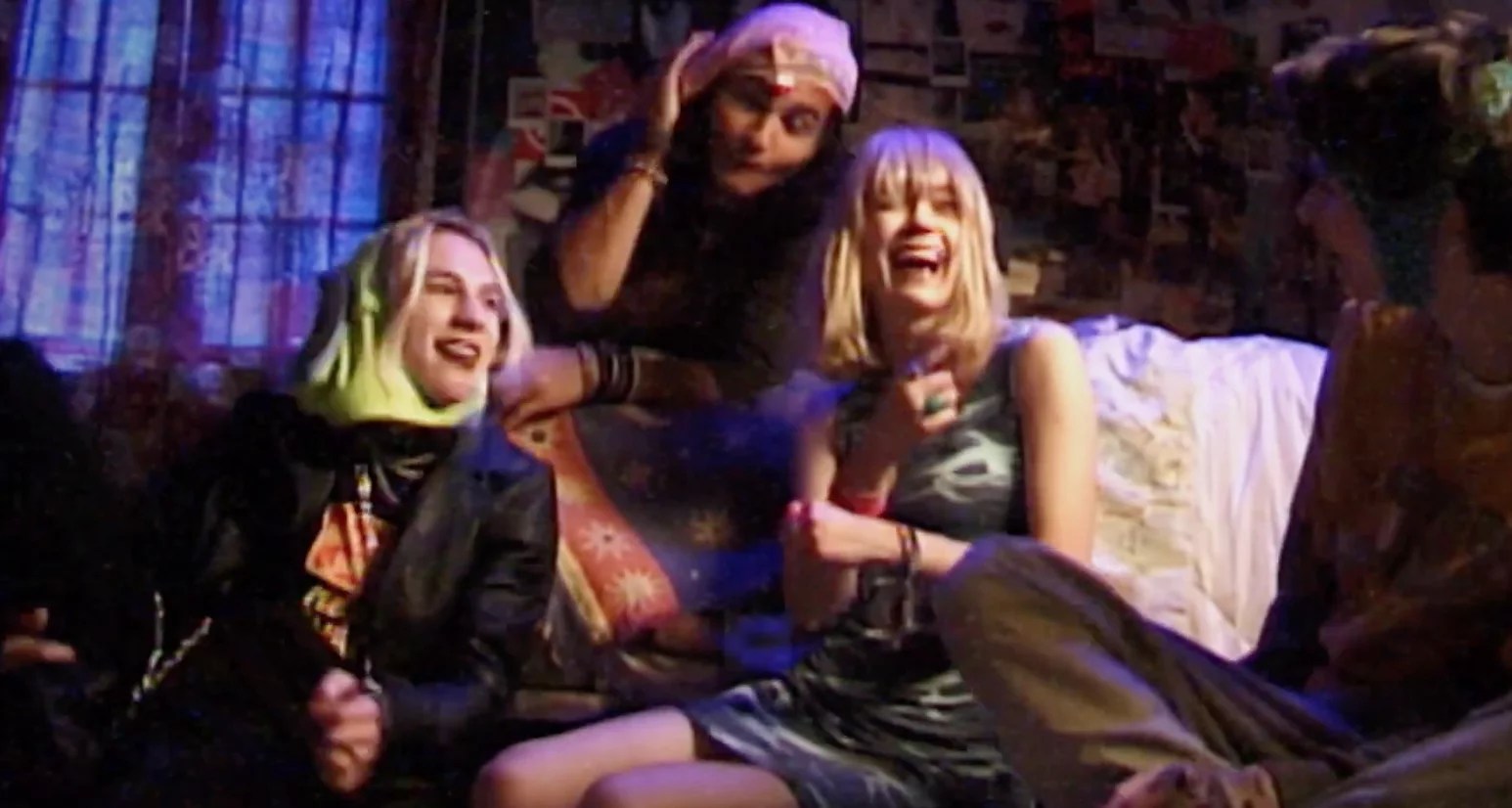 During the performance, the band members pretend to be possessed to scare Ankur, who is enraged by their pranks and leaves. However, the ghost of Bitch Cat members soon emerges and slowly hunts down R.A.C.K. Rachel, Ankur, Chris, and Kaleb are all killed one by one for openly insulting Bitch Cat and making fun of their music. Ultimately, the band’s story foreshadows the content race unfolding in the new millennium as teenagers continue to perform such risky endovenous to gain social media fame. Sadly for R.A.C.K., their quest leads them straight to death.

The second story, titled ‘Suicide Bid,’ is directed by Johannes Roberts. It revolves around Lily, a college freshman who wishes to join her college campus’s most prestigious sorority. After submitting a video application to the sorority led by a group of mean girls, Lily is called in for an interview. The girls reveal that before they accept Lily into their sorority, she must perform a dare. The girls challenge Lily to spend a night inside a coffin. The task stems from a student named Giltine, who was handed the same dare and mysteriously disappeared. Lily reluctantly agrees to perform the task that turns out to be a way for the sorority girls to haze the new girl.

Suicide Bid Ending: Is Lily Dead? Is the Legend of Giltine Real?

After spending some time inside the coffin, Lily becomes scared and abandons the challenge. However, before the girls can unbury her, Giltine attacks Lily. Giltine’s legend is proven true, and she continues to haunt the graveyard, searching for a friend. She transforms Lily into a demonic being just like her, leading to Lily’s death.

Meanwhile, the sorority girls return for Lily but find her coffin empty. Therefore, they make a pact never to speak about the incident. In the end, the sorority girls find themselves buried in coffins, similar to Lily. The girls are tormented by Lily, who explains that she has become Giltine’s friend, and the two are building their own sorority of dead girls. As a result, Lily promised Giltine to add more members to their ranks. Thus, the short ends with Lily exacting revenge on the sorority girls by subjecting them to the same gnarly fate she suffered.

The third segment, directed by Flying Lotus, is titled ‘Ozzy’s Dungeon.’ It revolves around a fictional eponymous game show that promises to fulfill the winning child’s wish. However, to have their wish granted by the mysterious Ozzy, the children must compete in a series of increasingly challenging and dangerous obstacle courses. One contestant, Donna, comes close to winning the game but is badly injured in the final round. A few years later, Donna’s family kidnaps the game show’s host for revenge.

After the host realizes his life is in danger, he agrees to lead the family to their wish. The host explains that Ozzy exists and wasn’t a hoax created by the show. He takes the family to the show’s old set. The group enters a cave through a door that leads them into a dungeon. Inside, an obese man sleeps while a few servants care for him. The person is revealed as Ozzy, and the host asks him to fulfill Donna’s wish. 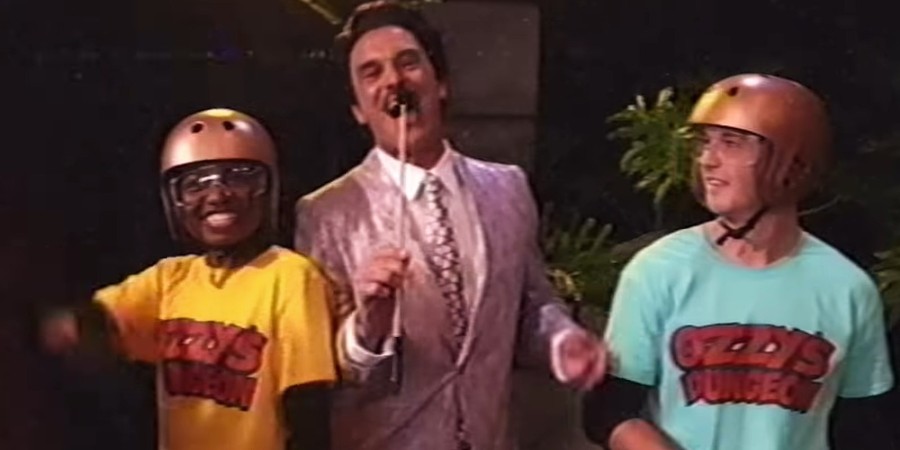 Earlier in the segment, the game show contests share their wishes. However, the show cuts to commercials before we hear Donna’s wish. From her family, we learn that Donna wished to become a film superstar. However, that dream was ended by the injury on the game show that left one of her legs brutally disfigured. Donna whispers her wish to Ozzy and a Lovecraftian creature explodes from Ozzy’s belly. The creature leaves the faces of the host and Donna’s family disfigured, similar to her leg. As everyone screams, Donna smirks, and the footage ends. Thus, the ending implies that Donna’s family looked down upon her after the injury, and she harmed them using her wish.

Directed by Tyler MacIntyre, ‘The Gawkers’ is the fourth segment in the horror film. It tells the story of Brady, a teenager who is making the stop-motion animation we see between the segments. Brady’s camera is taken by his elder brother, Dylan. Dylan uses the camera with his friends Kurt and Boner to spy on girls and record perverted videos. Meanwhile, a young woman moves into the house next door, and the trio spies on her. When Brady manages to befriend the woman, Sandra, the trio coaxes him into installing spyware on her webcam. However, the group soon realizes that Sandra is hiding a dark secret.

The Gawkers Ending: What Is Sandra’s Secret?

Sandra is an extremely attractive young woman who becomes Brady and Dylan’s new neighbor. Dylan and his friends spy on Sandra and start behaving increasingly creepy. However, if they install the spyware with Brady’s help, their desire to see Sandra naked is about to be complete. After Sandra undresses, the boys become excited and watch her from their computers. 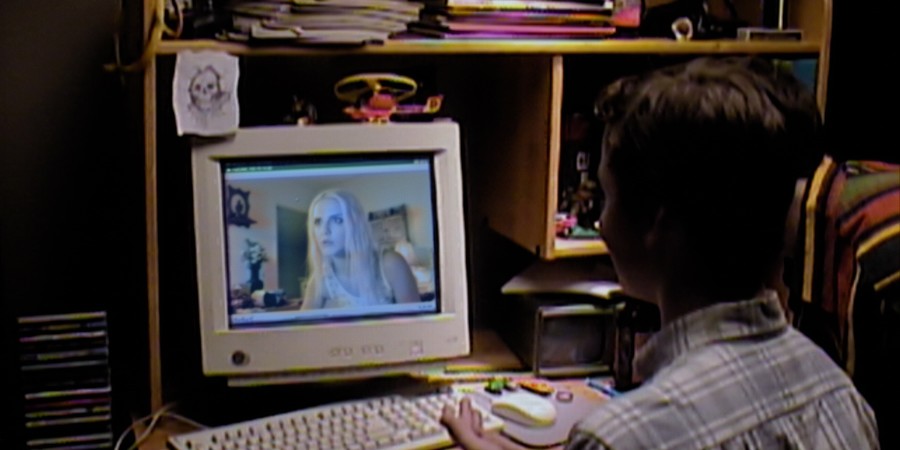 However, Sandra soon starts transforming into a monster. Green stems emerge from her head and turn into snakes. She then proceeds to attack the teenagers and brutally kills them. Ultimately, Brady and Dylan try to confront Sandra but are turned into stone. The short ends with Dylan and Brady turned into statues implying that Sandra is actually a modern incarnation of the Greek Goddess Medusa. Thus, the segment uses the classic Greek legend to comment on perversion at the turn of the century, aided by the advent of modern videography technology and the internet.

To Hell And Back

The fifth and final segment is titled ‘To Hell And Back’ and is directed by Vanessa & Joseph Winter. The tale revolves around best-friends Troy and Nate. They are professional videographers who are hired by a cult on the eve of Y2K. The cult is preparing to perform a ritual to summon their lord, Ukabon, from Hell to the human world. However, during the ritual, Troy and Nate are inadvertently transported to Hell, where they must fight for survival. In the process, they meet Mabel, who helps them fight the demons of Hell but has her own agenda.

To Hell And Back Ending: Do Troy and Nate Escape From Hell? What Happens to Mabel?

The short sees Troy and Nate trapped in Hell following the ritual to summon Ukabon. In Hell, the duo is quickly attacked by several demons. However, they are saved by a witch named Mabel. She is powerful and knows the weaknesses of the monsters. Moreover, Mabel hates Ukabon and agrees to help Troy and Nate return to the human world on the condition that they write her name in the Book of Witches. Troy and Nate have until midnight to reach the portal in Ukabon’s hideout to return to earth. 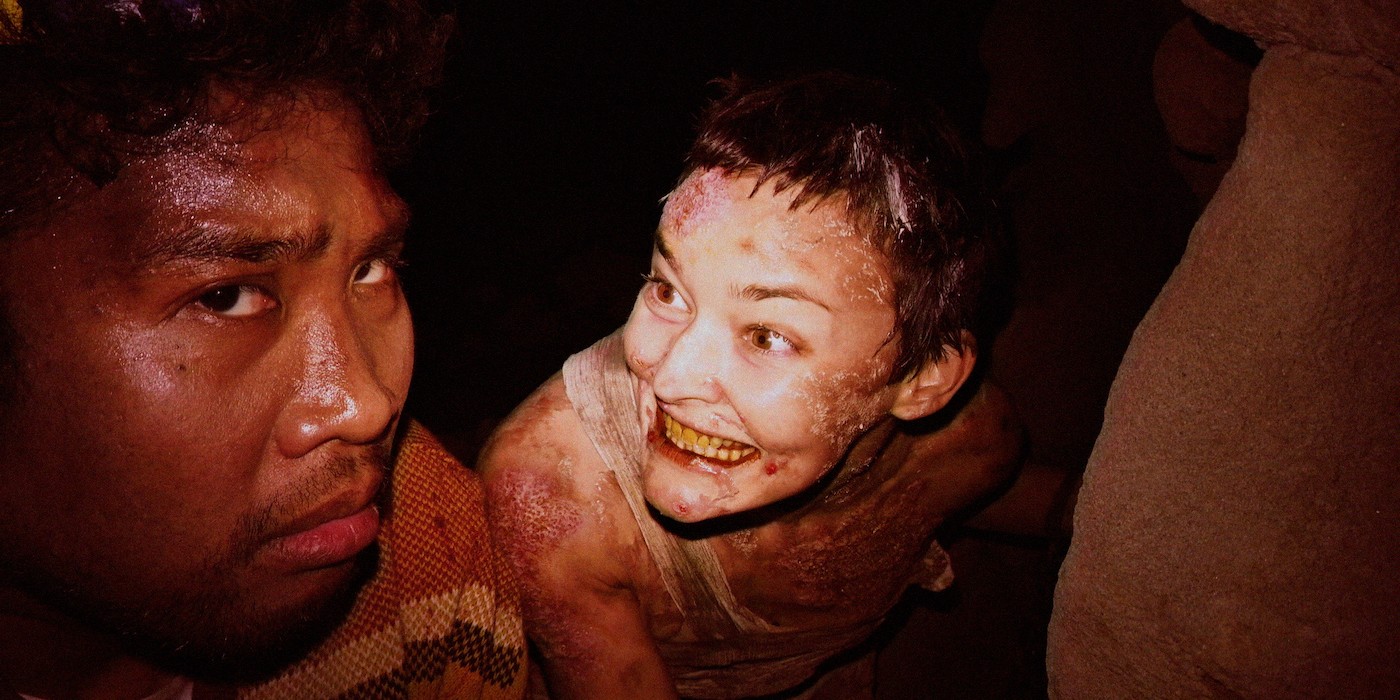