When Calls the Heart Season 9 Episode 8 Recap and Ending, Explained

Season 9 episode 8 of the drama TV series ‘When Calls the Heart’ is titled ‘Hope Valley Days Part 2’ and witnesses the townsfolk continuing with their festive celebrations preceding the holidays. However, their spirits get slightly dampened when Mei Sou’s alleged husband Geoffrey refuses to leave her alone and even gets her arrested by Nathan. As she contemplates how to get out of the mess, Bill’s health deteriorates and the Canfields take charge of the café.

Lee and Michael’s friendship gets strained due to a difference of opinion while Lucas steps up to help Elizabeth with a new task she undertakes. Intrigued to find out more about these incidents as well as what the ending of ‘When Calls the Heart’ season 9 episode 8 holds for Hope Valley residents? Without more delay, let’s get right into it! SPOILERS AHEAD.

The episode begins with the Hope Valley residents entering the second week of the Hope Valley Days celebrations. Michael’s endeavors to cheer everyone up during difficult times turn out to be a success and earn him newfound respect as the mayor. When Geoffrey tries to harass Mei Sou, Nathan stops him and warns him to stay away from her. Nonetheless, he still feels upset at her for hiding the truth and decides to have a word with her upon Elizabeth’s advice.

Later, Bill happily accepts Minnie and Joseph as his new partners at the café, but suddenly, his health gets worse and he coughs up blood. Concerned, he visits Faith again, who scolds him for not heeding her advice and getting an X-Ray done. Moreover, he reveals that he may have cracked a rib during his previous altercation with Geoffrey, which further complicates his condition. Thus, Faith and Molly keep him under strict observation till they can find him a temporary solution.

Meanwhile, a teacher named Mary Albers from a nearby town arrives in search of some study material for senior students. Lucas puts her in touch with Elizabeth, who gladly decides to help her by delivering books to neighboring towns as she had planned before. She also relates to Mary’s situation as a new teacher in an under-resourced frontier town and praises her initiative. As Elizabeth deals with her guests, Lucas garners a lot of admiration from her students as he teaches the class in her absence. Elsewhere, Rosemary gifts Lee a typewriter, but he struggles to learn how to use it.

Luckily, Faith manages to procure a cough syrup for Bill and sternly advises him to take the prescribed dosage and come back for re-examination. Even though she tells Nathan to keep an eye on him, Bill ends up consuming more than necessary and gets intoxicated. This leads to Nathan hilariously trying to take care of him while working at the police station. Later, Elizabeth and Minnie are able to convince Anna’s mother to let her stay back in Hope Valley and work at the café. Not just that, the Canfields offer to keep her as a tenant in the rooms above the café.

Afterward, everyone gathers together for a heartwarming Sunday mass at the church, followed by a Christmas tree suddenly landing up out of the blue in the town square. While the townsfolk are excited to see it, they wonder who has brought it there. Eventually, it is revealed that Bill placed it there to brighten up everyone’s spirits and play an April Fool’s Day prank as part of his duty for the Hope Valley Days. At Elizabeth’s Thanksgiving dinner at the saloon, the Coulters offer to click everyone’s photos with their new camera and Hope Valley residents prepare for whatever new challenges come their way.

When Calls the Heart Season 9 Episode 8 Ending: Does Mei Sou Get Convicted?

Upon Elizabeth’s insistence, Nathan approaches Mei Sou to have a heart-to-heart conversation. She apologizes for concealing the truth and divulges about her and Geoffrey’s past. As per Mei Sou, she apprenticed at his pharmacy during her medical school days, and eventually, he offered her a job after graduation. But soon it became evident that he had feelings for her, which she did not reciprocate. Despite her refusal, Geoffrey persisted and told everyone that he had proposed to her. 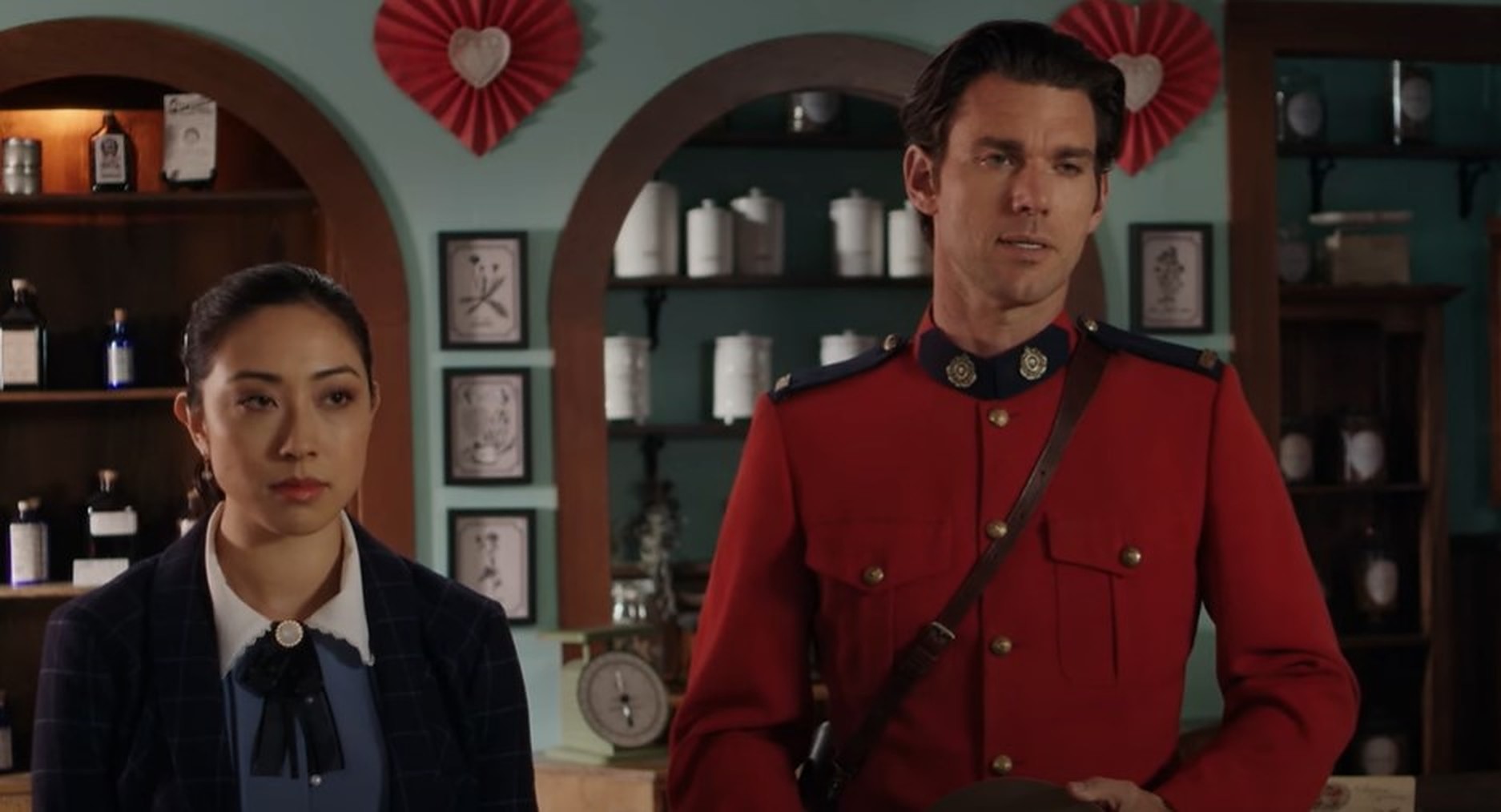 A troubled Mei Sou became desperate to leave Chicago, so Geoffrey forged her signature on a marriage license to bind her to himself. But when she found Ned’s letter, she saw it as an opportunity to escape and began corresponding with him as Geoffrey. After the Yosts confirmed her employment, Mei Sou secretly ran away and came to Hope Valley, while Geoffrey filed charges of larceny, forgery, and spousal abandonment against her in Chicago. After Faith wrote to him, he guessed Mei Sou’s whereabouts and came to town looking for her.

In the present, Geoffrey forces Nathan to arrest Mei Sou by threatening to get him suspended. The latter unwillingly takes her into custody but telegrams his sources to probe further into Geoffrey’s background. Nathan tries his best to stall Mei Sou from getting convicted but unfortunately gets a call from the higher authorities in Chicago to arrange for her to be transported there.

Just as she is about to lose all hope, he finds some information that changes everything. According to a document that Nathan receives, Geoffrey is already married to another woman and has abandoned her. This nullifies his claim of being Mei Sou’s husband and therefore, all charges against her are dropped. Regardless, he implores her to not leave him, but she firmly tells him to go away and thanks Nathan for all his help and trust in her.

Do Lee and Michael Reconcile?

Michael gets heavily upset when Lee writes and publishes two insulting editorial pieces about him in the Valley Voice. The articles question his credibility as the mayor and criticize every move he has made since he got elected. Upset that his own friend wrote such hurtful opinions of him, he bluntly tells Lee that he doubts their friendship. At first, Lee stands by what he wrote and questions Michael’s potential, but Rosemary repeatedly makes him realize that he is letting his disappointment of losing the election cloud his journalistic judgment.

Furthermore, Lee’s opinion changes when he sees Michael’s Hope Valley Days initiative bearing fruit and spreading joy in the town. Upon realizing that he may have been too extreme in his actions, Lee tries to apologize to Michael but fails in his attempts to convince him of his remorse. Hence, he decides to go one step further and writes a new editorial piece praising the new mayor’s smart gesture and giving him an impartial chance at governing Hope Valley. Michael is touched upon reading the article and readily forgives Lee. The two friends happily reconcile at the Thanksgiving dinner.