Where Are Diego and Laith From Hotties Now?

Hosted by Jade Catta-Preta, Hulu’s ‘Hotties’ takes the idea of a daring blind date to the next level. Every episode, two couples are brought on the show for their very first blind date, which is far from a typical one. Each pair has to face the other in a cooking competition by preparing a spicy meal as instructed. Interestingly, the contestants are presented with three different spicy dishes at regular intervals, which they have to eat before resuming their cooking.

Based on the couples’ dishes and chemistry, Jade announces one of the two as the winner. The cash prize of $2,500 can be used on their second date or split between the two if the partners agree never to see each other again. The contestants have certainly caught the public eye thanks to the show’s sizzling nature. One such pair from the dating show is Diego and Laith, and viewers cannot help but wonder what they are up to these days. Well, here’s everything we know about their current whereabouts.

Diego and Laith Faraj appeared in the second episode of ‘Hotties’ season 1. Through his stint on the show, Diego, a personal trainer from Guatemala, hoped for something casual, though he was open to the possibility of something more. On the other hand, creative writer Laith did not want anything “hot and heavy” from the first date and was more interested in establishing connections. While he is originally from Detroit, Michigan, he currently lives in Los Angeles, California. 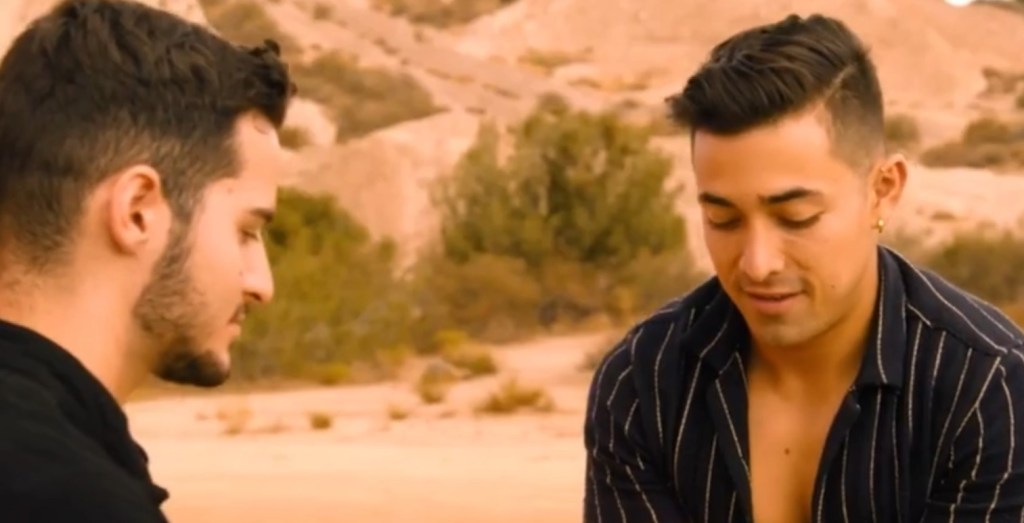 The couple’s first impression of each other was quite favorable- Diego thought his date was super cute, whereas Laith rated his potential partner a 9 out of 10 and professed his appreciation for the former’s hair, smile, and style. For the cook-off, the pair competed against Paul and Rose to cook Sausage Party (spicy sausages). The participants had 75 minutes to complete the task and faced three rounds of heat challenges. The first was Tickle My Pickle, where they had to eat pickles covered in chilly flakes (100,000 Scoville heat units).

In the second challenge, Tongue Twister, Diego and Laith had to each eat half a slice of Devil’s Tongue Red Pepper (425,000 Scoville heat units). The final spicy dish for the pair was Watermelon Meltdown, where the contestants had to finish off a slice of watermelon caked in ghost pepper powder (1,000,000 Scoville heat units). At the end of the competition, Diego and Laith’s dish impressed Jade, yet she declared Paul and Rose the winner since she felt they had better chemistry. Eventually, Laith seemed more than willing to go out again with his partner in the show, but Diego did not feel the same attraction.

Where are Diego and Laith Now?

It turns out that Laith Faraj is a man of many talents- apart from writing, he is also an actor, a model, and a singer, often posting his music on his YouTube channel to showcase his skills. For his acting ventures, the Los Angeles resident is affiliated with Image Powerhouse Agency and is partnered with Prestigious Modeling for his modeling work. On the personal front, Laith seems to like traveling and has made several trips to places like Mexico.

Moreover, the reality star seems fond of spending quality time with his friends and family. Meanwhile, not much is known about Diego’s current status, but we wish him the best in his life and hope he and Laith have wonderful futures ahead.