Where is Domino Masters Filmed? 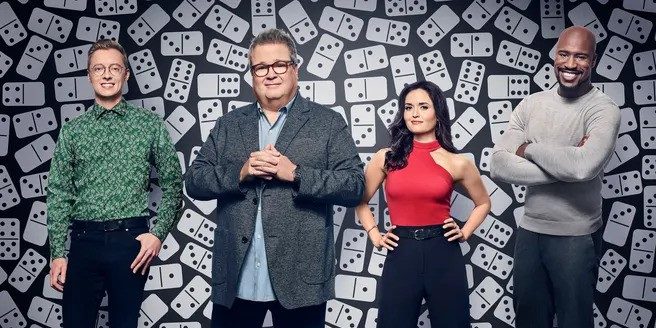 As you might have guessed already, ‘Domino Masters’ is a reality competition series that involves a lot of dominos. In every episode of this exciting and unique reality show, there are several teams of three building stunning domino projects. Now, this needs to be done with the help of various rectangular blocks as well as kinetic devices. In addition to that, the participants or teams have to keep in mind the creative and practical goals of the challenge for that particular episode while building these dominos in order to complete the challenge successfully.

What makes this show as exciting and thrilling as it is — besides the concept and rules of the game — is the involvement of multi-Emmy Award-winning actor Eric Stonestreet (‘Modern Family‘) as the host. Keeping company with the famous actor are the judges that include the actress Danica McKellar, NFL Pro-Bowler and Super Bowl Champion Vernon Davis, and the professional domino artist and chain reaction artist Steven Price. Considering the intriguing format, many of you might be wondering where ‘Domino Masters’ is filmed. Well, here is all the information that you need!

‘Domino Masters’ is filmed extensively in Santa Monica, California. The filming for the inaugural season of the reality series commenced by the end of May 2021 and concluded by July of the same year. Eric Stonestreet expanded more on the filming process of this show in a telephonic interview with The Kansas City Star. He said that ‘Domino Masters’ took more out of him to film than ‘Modern Family.’

Stonestreet revealed that each episode of season 1 of this reality game show was filmed over three days in June 2021, and some of them took 12-hours each day, with the contestants having to work for 16 hours to complete their builds. If you are curious to learn more about the specific location used to film the series, we have got you covered!

‘Domino Masters’ is filmed in the beachfront city of Santa Monica, located in Los Angeles County, west of downtown Los Angeles. Believe it or not, the show uses a hangar at the Santa Monica Airport as a soundstage to bring the show to life. The idea of shooting at such a location was baffling even to Stonestreet, which he openly talked about in the same interview. He revealed, “It’s a whole thing of me standing up there just cracking up and joking, but also kind of not joking about like, ‘Really? This is the location we decided to use.’”

Laughingly, the actor added, “There’s the rumble of B-14 bombers coming in at 3 in the afternoon while we’re trying to shoot a TV show and it’s rattling the stage. Like, maybe that’s not the best place to shoot a show that’s a millimeter away from ruining 16 hours’ worth of work.”

Being a studio-based show, the series was shot in a single location, that is, in a hangar at the Santa Monica Airport, allowing the production to be wrapped up fairly quickly as compared to other shows that film in different locations throughout a single season. Stonestreet admitted that he was not on set every minute of the shoot, but he was called into the studio to film a reaction to a few incidents that happened during the builds of the episode.

Talking about the concerns of the ventilation system, the actor added in the same interview, “They were worried about the draft. Because the soundstage is cooled — that’s one of the reputations of soundstages: You keep them cool because you’re under excruciating lights — they’re gonna have to figure out how to get air conditioning in there that doesn’t blow down on the builds.”

However, it is not the first time that a hanger at the Santa Monica Airport has been used for filming purposes. The Nicholas Cage-starrer ‘Red Rock West’ and the comedy crime movie ‘The Big Lebowski‘ also filmed several sequences in the hangars of this particular airport.