Where is Eman From Easy-Bake Battle Now?

With Antoni Porowski as a host, Netflix’s ‘Easy-Bake Battle: The Home Cooking Competition’ AKA ‘Easy-Bake Battle,’ is a baking show that welcomes three different home cooks in each episode. The participants must compete in two rounds of challenges in order to win the title of the Easy-Bake Champion and earn the $25,000 cash prize. The winner has the opportunity to return for the next episode and continue defending their title and earn even more money.

The recently released season 1 of the series saw many participants claim the title of the Easy-Bake Champion. This included Eman Neamat, who showcased her exceptional skills and rich heritage through her food and creativity. Her baking skills in the cooking series helped her earn many fans. Naturally, people are curious to know more about Eman’s current whereabouts, and we are here to explore the same.

Eman Neamat entered the third episode of ‘Easy-Bake Battle’ season 1 in order to show the world what she is made of. The theme for the day was kid-friendly food, and Eman had to compete against Tara and returning champion Haley Herridge. For the Dish Dash round, Eman had to make a fun snack for the kids using at least 3 ingredients that most children despise. With her Crunch Wrap, Eman was able to win the round and move on to the Easy-Bake Challenge, where she had to compete against Haley in order to prepare a three-tier dessert platter. 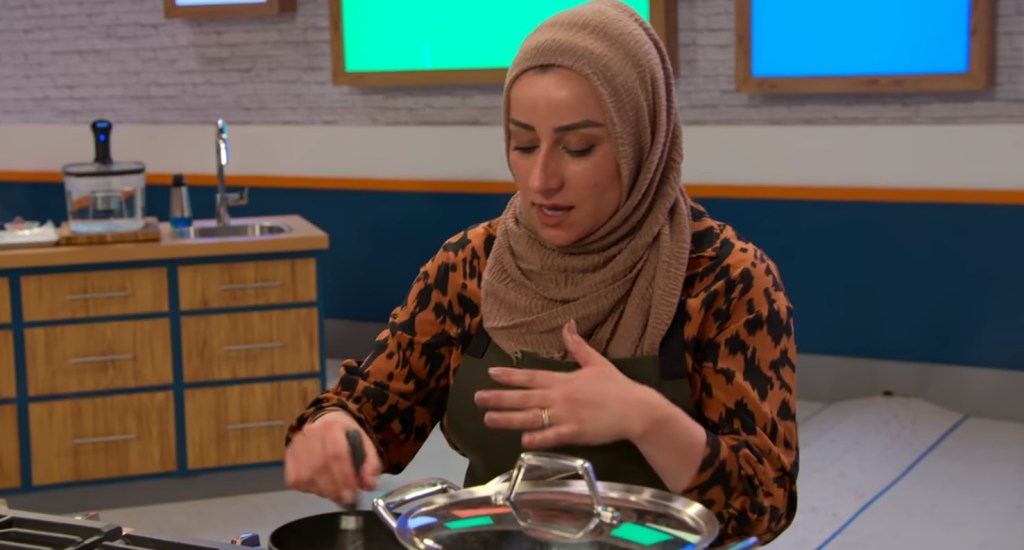 Despite the tough competition, Eman was able to win the challenge and was crowned the Easy-Bake Champion and awarded $25,000. In the fourth episode, Eman returned to maintain her position as the Champion and had to face Stephanie and Chris. The theme for the episode was Holidays. For the first round, the cooks were asked to make a dish inspired by their favorite holiday, but they could not bake anything. Eman decided to honor her Kurdish heritage by making Kleicha Trifle for Eid. This helped her win the round and secure her a position in the Easy-Bake Challenge.

Stephanie and Eman now had to make a Thanksgiving Dinner for Antoni and guest judge Alyse Whitney. The meal needed to have one protein and two side dishes though the use of Turkey was prohibited. Eman decided to prepare Roasted Salmon with Green Beans and Delicate Squash as her sides. However, she lost the competition to Stephanie and had to give up her title as the champion.

Where is Eman Neamat Today?

As of writing, Eman works as a Recipe Developer and Content Creator. The talented Kurdish woman has an impressive following on various social media platforms, through which Eman likes to demonstrate the food she prepares with the world and is happy to share original recipes with her fans. Some of her recipes can be accessed in a written format as well.

On the personal front, Eman is a proud mother of two sons and a daughter. Her husband and her kids are quite supportive of Eman’s venture into the cooking industry and were her biggest cheerleaders during her time on the Netflix show. In fact, her husband was the first person that Eman contacted after becoming the champion. Presently, Eman is based in Connecticut and living her life happily. We wish her and her loved ones the best in their lives and hope for success in their future endeavors.

Read More: Where is Stephanie From Easy-Bake Battle Now?