Where is Heather Tallchief Now?

There have been quite a few daring heists to have transpired in the United States of America over the years, yet some take the winning crown for not only being absurdly perplexing but also exciting. Thus, to delve into every detail of the matter, three such tales are profiled on Netflix’s aptly titled documentary series ‘Heist,’ where both reenactments and interviews from the very people who pulled off the robberies play a crucial role. So now, if you are curious to know more about armored car thief Heather Tallchief, in particular, we’ve got the details for you.

Who is Heather Tallchief?

Heather Catherine Tallchief was born to a teenage pair in the Kensington-Bailey area of Buffalo, New York, where she was enrolled into Williamsville schools, City Honors School, and Sacred Heart Academy. She stayed with her father once her parents separated when she was two or three, but her childhood wasn’t a happy one. After all, as per her comments, her father’s next partner resented her and did not mind making it evident. Growing up receiving no apparent affection in a house where drugs and alcohol were in constant use took its toll on Heather, as per the series.

Therefore, at 17-years-old, Heather left the area to live with her mother in California. She subsequently worked hard and became a certified nursing assistant, treating patients with “full-blown AIDS.” However, as per the Netflix show, the job, pain, and death began to trouble her, leading to the use of cocaine as a coping mechanism. Eventually, Heather’s habits spiraled, and she lost her job, all by the time she turned 21. That’s when she met career criminal, poet, and convicted killer Roberto Solis in a local bar in San Francisco in early 1993. He asked if he could buy her a drink, and she agreed.

As per the documentary, Roberto got Heather’s full attention by asking her the strange question of if she believed in the devil and then lured her with a line of cocaine. Being flirtatious, charming, and a master manipulator helped him take her home, where he introduced her to the notions of mysticism and “sex magick.” As Heather’s headspace was disjointed and delusional at the time and being with Roberto gave her a sense of purpose, confidence, and security, she willingly migrated with him to Las Vegas that same summer, where a nine-to-five job for him wasn’t even considered a choice. 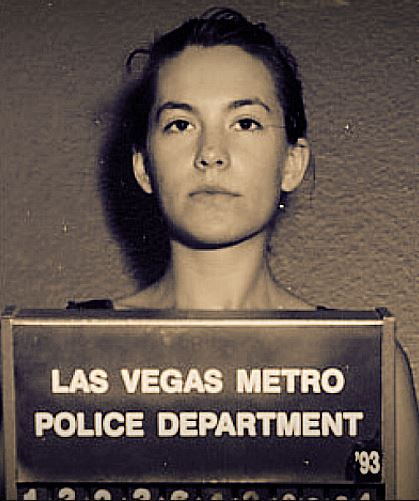 Not naive to the fact that her partner was a career criminal, when Roberto urged Heather to become a security officer at Loomis and began inquiring about her daily routes, she realized that he was pondering a heist with her involved. So, on October 1, 1993, she drove away with about $3.1 million in an armored truck and disappeared with Roberto. “Saying no to him wasn’t an option,” according to Heather, but she’s also never denied her love for him. Her dream future was a self-sufficient life with Roberto on a possible farm, but that did not happen.

Where is Heather Tallchief Now?

From Denver to Florida to the islands in the Caribbean to the Netherlands, Heather Tallchief and Roberto Solis traveled far and wide to hide from the authorities. Though, he soon stopped treating his co-conspirator properly: moving other women into their home and allegedly manipulating them into what he needed. This became worse after Heather gave birth to their son, resulting in her choosing to split for good in the mid-1990s. Roberto didn’t put up a fight, quite surprisingly, so she left with a few thousand dollars in cash and her son in her arms.

As per ‘Heist,’ Heather subsequently worked as an escort for survival and then a maid at a local hotel. She’d even found someone she was happy with — a man whom her son considered to be his father. Yet, the “fugitive” tag continued to eat at her. Heather wanted to have her own identity again and provide her son with a relatively ordinary life. After almost 12 years, in the fall of 2005, she returned to the States using a British passport under Donna Eaton’s name and surrendered to the agencies of her own free will. She simply wanted the case to be over with.

Therefore, on March 30, 2006, once Heather pleaded guilty to two counts of embezzlement and one count of passport fraud, a judge sentenced her to five years and three months in federal jail. He understood that she was merely a pawn in the mastermind’s game, but her criminal actions needed to have consequences as well. Heather was granted release in June 2010, and she spent the next five years under supervision. Since then, although she prefers to stay out of the limelight, we know that she has established a good life for herself.

Still dwelling in America, Heather is back to serving in the healthcare field and seems happy to be home. She has always maintained that she did not have the money as Roberto managed it all and that she has no idea where he is today. With that said, however, she believes that he is not even alive. “No, there’s no way,” Heather stated in the documentary. “There’s no way. …But if you find him, please don’t tell him where I am.” Moreover, she has also maintained that she couldn’t have helped Roberto plan the heist even if she wanted to because of the complexities involved. But still, she has to repay nearly $3 million to Loomis, as per court orders.