Created by Baran bo Odar and Jantje Friese (the makers of ‘Dark‘), ‘1899‘ is a riveting sci-fi TV series on Netflix. When a passenger ship traveling from London to New York receives signals from a missing ship called Prometheus, it takes a detour to rescue the vessel that went adrift four months ago. Strange and unexplainable events start to occur, and chaos ensues. Most of the story is set aboard the ships amidst the endless waters of the ocean.

The color tones, depiction of the climate, and hyper-realistic backdrops captivates the audience and immerse them in the story. They add to the overall mood of various characters and elevate their brilliant performances. All these aspects make us curious about the filming locations and even techniques used in ‘1899.’ If you are curious about the same, we have a detailed account of the behind-the-scenes process. Let’s begin, shall we?

‘1899’ is filmed in Germany and England, specifically in Potsdam and London. While the lens test shoots took place in November 2020, the principal photography for the inaugural iteration officially commenced on May 3, 2021, and was wrapped up on November 5 of the same year. Initially, the showrunners had planned to visit various countries such as Spain, Poland, and Scotland, but the pandemic disrupted this plan and paved the way for something groundbreaking. Let’s now look at the specific locations that appear in the Netflix show.

‘1899’ is almost entirely taped in Potsdam, the capital of Brandenburg state, which also happens to be the only UNESCO-designated City of Film in Germany. The cast and crew set up camp in Volume, a virtual production stage at Studio Babelsberg, at August-Bebel-Street 26-53. Almost all pivotal scenes involving the ship’s various parts, such as the deck and the fireroom, are lensed there. Studio Babelsberg is the oldest large-scale studio complex worldwide. 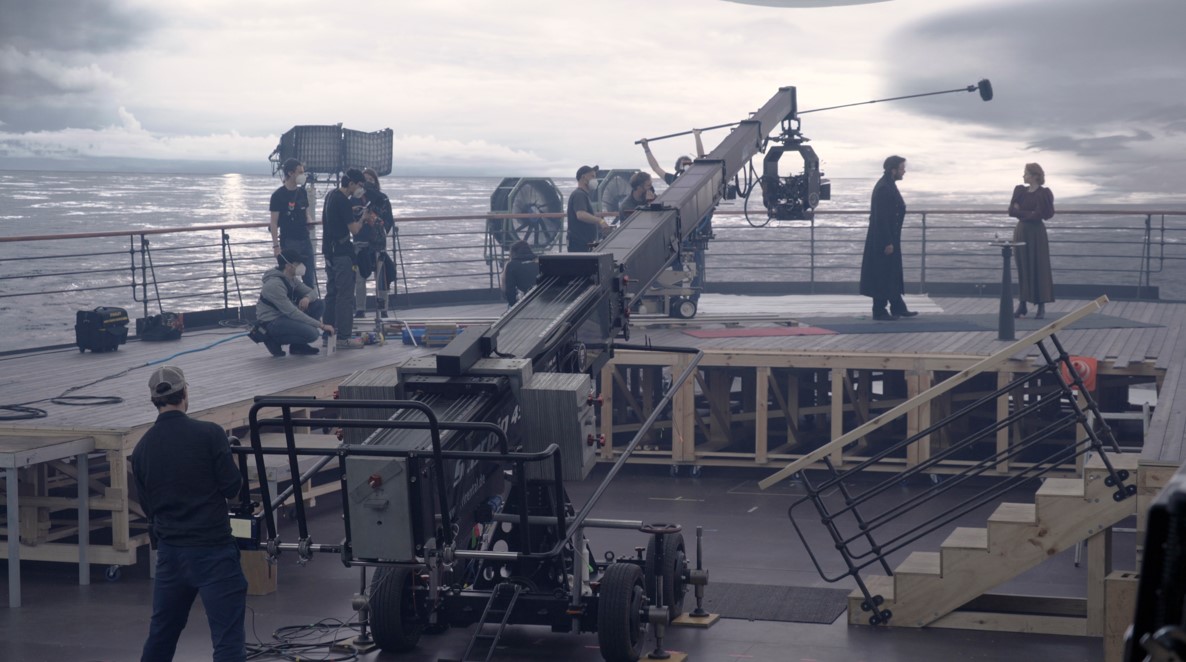 After ‘The Mandalorian,’ ‘1899’ is one of the biggest shows shooting most of the series using virtual production technology. In an interview with Deadline, creators Baran bo Odar and Jantje Friese mentioned that the technology is entirely new, and they took it up as a challenge to learn. They even spoke with the team behind ‘The Mandalorian’ to gain perspective about the process and even built a test studio at the Shepperton Studios in the UK.

This new technology is being deemed the future of filmmaking and cinema because of its potential to replace green screens. In addition, it provides the actors with an immersive experience when performing in front of the camera. While the technology does minimize the post-production process, the prep for creating such visuals takes time and immense effort. To elevate this facet, the production team also constructed set pieces and units for portraying different environments.

A part of the Berlin/Brandenburg Metropolitan Area, Potsdam sits atop the River Havel and has a hilly landscape studded with lakes. The city is more than a thousand years old and holds cultural and historical relevance. Potsdam houses the parks and palaces of Sanssouci, Germany’s largest World Heritage Site, as well as other places of interest like the Orangery Palace, the Cecilienhof Palace, and the Brandenburg Gate. The hit movies ‘V For Vendetta,’ ‘The Matrix Resurrections,’ and ‘Inglourious Basterds’ were shot at Studio Babelsberg, Potsdam.

Pivotal portions of the Netflix series are recorded in London, considering a few characters are English. These locations likely appear in the series when we watch the characters’ backstories before they board the ship. The city’s ancient structures and overall victorian vibe lend themselves to those scenes in the show. Overall, the scenes taped in the studio and locations in London are seamlessly interspersed with each other to give the audience a smooth viewing experience.

Read More: 1899 Review: Another Thrilling Piece of Puzzle From the Creators of Dark