Where is Swimming With Sharks Filmed? Is the Show a True Story?

Created by Kathleen Robertson, ‘Swimming With Sharks’ is a drama series that revolves around a seemingly naive and young assistant named Lou Simms, who is smitten by the company’s CEO, Joyce Holt. Over a short period, Lou becomes indispensable to Joyce while the former is trying to outplay her predatory boss and have a baby for years. What seems like a happy accident isn’t so, as Lou has done deep research on Joyce to land this particular job. As her obsession continues to get the better of her, she is ready to do anything to get closer to her idol, even get her hands dirty.

The dark undertone syncs perfectly well with the intensely dramatic narrative of the series. The aesthetic backdrops of the exteriors and sophisticated interiors keep the viewers hooked on each episode while keeping them guessing about the locations that feature in the series. Moreover, the drama series portrays some realistic complications surrounding Hollywood that are not unheard of in real life, which is enough to make us wonder if the show has anything to do with reality or not. Well, allow us to put all your curiosities to bed!

‘Swimming With Sharks’ is majorly filmed on location in California, specifically in the city of Los Angeles. The western US state of California is considered one of the most diverse states geographically as it is home to first-rate production facilities and a varied landscape, including gorgeous beaches, majestic coastal mountain ranges, National Parks, and the modern cityscape. All these features make California a prominent filming location. Over the years, movies and TV shows such as ‘This Is Us‘ and ‘Eternals‘ have used the versatility of the state to their advantage.

The principal photography for the inaugural season of ‘Swimming With Sharks’ reportedly commenced in February 2020, only to be halted a month later for several weeks due to the COVID-19 pandemic. The filming resumed in September 2020 and wrapped up in October of the same year. Now, let’s learn about the specific locations that appear in the drama show!

The production team of ‘Swimming With Sharks’ sets up camp in the Southern Californian city of Los Angeles to film the series. Although the cast and crew of the series travel across Los Angeles — mostly in the neighborhood of Hollywood — to tape many scenes on location, several scenes are shot in the Paramount Studios located at 5555 Melrose Avenue in Hollywood. The expansive film studio has served as a prominent production location for a number of filming projects, including ‘Free Guy,’ ‘Barry,’ and ‘Suicide Squad.’

The cast and crew members of the drama show were spotted filming a few pivotal scenes in Musso & Frank Grill. It is a fine dining restaurant located at 6667 Hollywood Boulevard in Hollywood.

Other than that, for filming purposes, the production team also traveled to Hollywood Forever Cemetery, which is situated at 6000 Santa Monica Boulevard. Moreover, some of the sequences for the first season were also filmed on the famous Hollywood Walk of Fame. It is a historic landmark that is located along 15 blocks of Hollywood Boulevard and 3 blocks of Vine Street in the Hollywood neighborhood.

Furthermore, Marilyn Monroe’s first apartment in LA served as the house for Lou Simms where various pivotal sequences are filmed for the drama show. The apartment is also located in the Hollywood neighborhood, which makes it convenient for the production team.

Is Swimming With Sharks Based on a True Story?

‘Swimming With Sharks’ is partially based on a true story. Most of you might be familiar with the title of the series as it is loosely based on the 1994 eponymous movie by George Huang. The drama series is a gender-swapped adaptation of the film. However, the film and series share a few similarities as they critique the hunger for power that shakes one’s moral ground, showcase scandals that are prevalent in the contemporary times, and most importantly, use Hollywood as one of the characters. 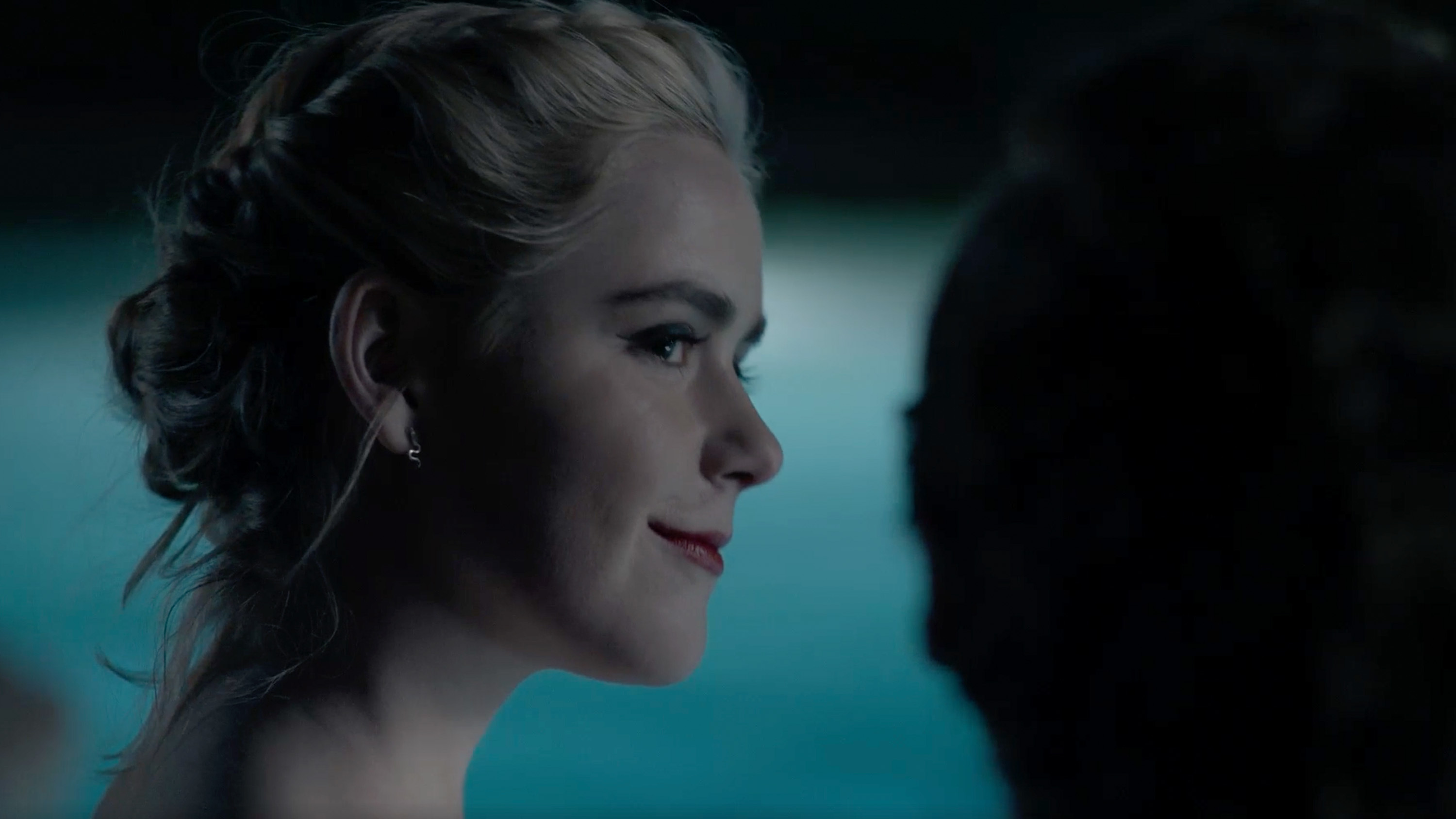 In April 2022, the showrunner Kathleen Robertson sat down in an interview with The Wrap, where she was asked how much inspiration she drew from the film. She revealed, “The only shared component is the title [and] the world, being the film and television industry. And then, sort of similar to the original film, focusing on this relationship between a very powerful person and somebody who works for them, who’s just starting out in the business. The rest is very much its own animal.”

Kathleen continued, “I really wanted to explore this story from a female perspective, and lean into how much things have changed since the original film came out.” The creator further expanded how her long career in the industry played its role in her coming up with the idea of ‘Swimming With Sharks.’ She said, “…it’s a bit of an exploration of my experiences starting out very young. Having my identity shaped and formed through this industry has been kind of interesting.”

In another interview, Kathleen explained that the show is partially based on her own experiences. Apart from the fact that the show is pulpy, a bit exaggerated, and violent with sexual overtones, she expressed that quite a lot of the storylines in the series are very personal. She hasn’t witnessed a murder in real life, but she has seen several other stuff and tried to plug them into the show. “I’ve always seen things, heard things, witnessed things and thought, ‘Oh, my God, that would be such an interesting scene in a series,’ ‘That would be such a weird, interesting character trait,’ ‘That would be such a crazy moment,’” Kathleen told The Wrap.

Specifically, the story of a 19-year-old Lou moving to LA to follow her dreams is pretty much the story of Kathleen, who also moved to the City of Angels from Canada when she was 19, intending to make her mark in Hollywood, and so she has! The creator further remarked that the show “does not hold back in showcasing the complex, ego-driven, and ambition-fueled pursuits in one’s attempts to make it in a town riddled with more broken dreams than success stories.”

By portraying her own version of Hollywood, Kathleen gives the audience a glimpse into the intricacies of Hollywood that can be “as cutthroat as it is glamorous.” In doing that, the creator depicts some of the harsh realities of the entertainment industry. So, since her personal experiences and creative mind are responsible for conceiving the narrative of the drama show, it would be safe to say that ‘Swimming with Sharks’ is partially based on a true story.