Where is The Real Love Boat Filmed?

CBS’ ‘The Real Love Boat’ is a dating reality series that brings together a group of singles on a cruise ship, where they must mingle and form connections. However, their compatibility is tested by a series of challenges, surprise dates, and the arrival of new singles. Moreover, the ship’s crew plays matchmakers as they nudge potential couples toward each other to create the perfect love story. The final pair that withstands time and reaches the ship’s destination is adjudged the winners and given a cash prize and a luxurious trip.

Hosted by Rebecca Romijn and Jerry O’Connell, the reality series is adapted from the hit romantic comedy series ‘The Love Boat.’ It adds a unique twist to the already existing shows in the genre with its unique format and setting. Since the original show was based on a cruise, viewers also wonder if ‘The Real Love Boat’ takes place on the same ship. If you, too, are eager to know about the exciting places where the show is lensed, here is everything you need to know.

‘The Real Love Boat’ is filmed across the Mediterranean Sea on a cruise ship named the Regal Princess. The principal photography for the inaugural iteration of the reality series took place over 21 days in July and August 2022. Interestingly, the luxurious ship belongs to the same cruise line utilized by the parent show. Now, let’s hop aboard and discover the filming site in more detail!

A post shared by The Real Love Boat Captain (@therealloveboatcaptain)

‘The Real Love Boat’ is entirely taped aboard the Regal Princess, a luxury passenger cruise ship operated by Princess Cruises. The Royal-class vessel was constructed in Monfalcone, Italy, and first set sail in May 2014. It is built with elegant interiors and features several entertainment areas, such as a multi-level atrium, a theater, various dining rooms, restaurants, and pools. Furthermore, it has a maximum capacity of 5,600 passengers and crew.

Throughout the filming schedule, the ship covers numerous destinations across the Mediterranean region, including breathtaking places in Italy like Tuscany, Sorrento, Messina, and Genova. It seemingly also sailed through Santorini, Greece, and Spain, Cartagena, among many other regions. Hosts Jerry and Rebecca had a wonderful time recording the debut season on the Regal Princess and shared that it was their first time on a cruise ship.

In addition, Jerry divulged that the cast and crew tape scenes amid thousands of regular guests on the ship to maintain authenticity. Thus, they utilize every part of the cruise to lens different scenes and segments, along with their interactions with the guests. In a July 2022 interview with Travel Age West, John Padgett, the President of Princess Cruises, elaborated on the makers’ decision to shoot the series on the ship. 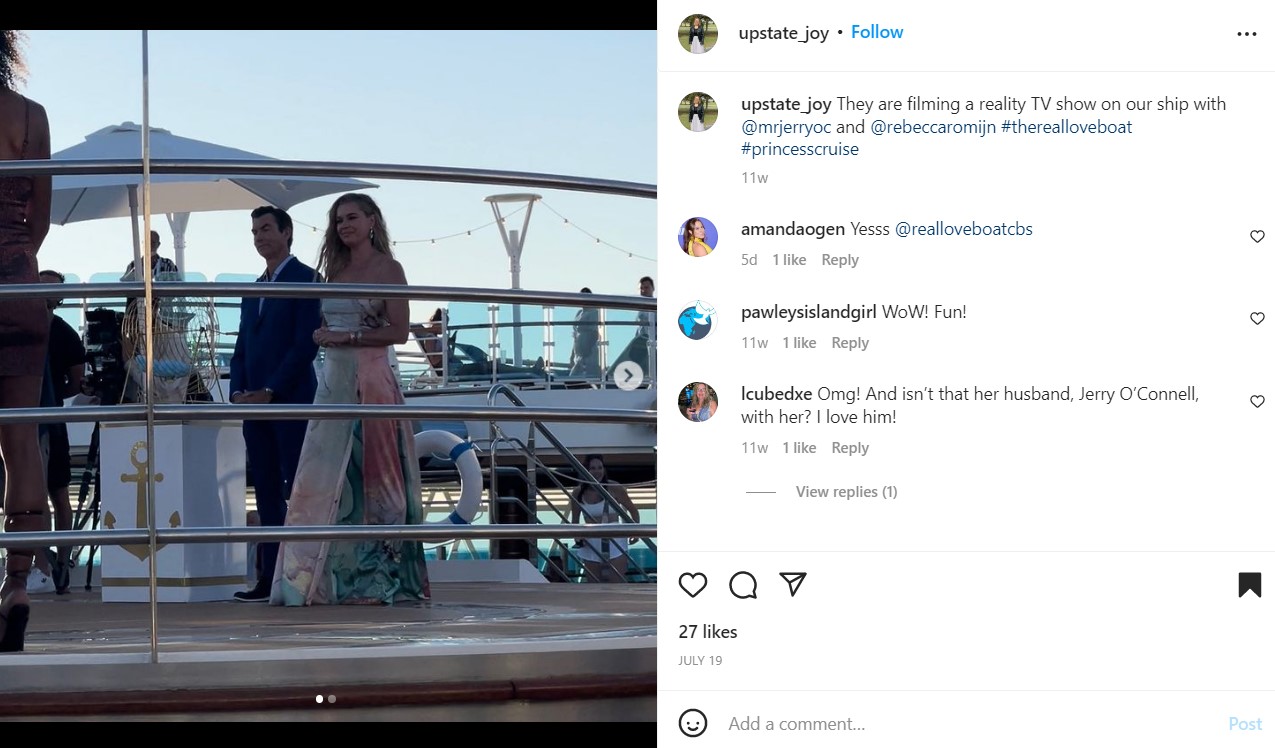 John said, “The original ‘Love Boat’ was beloved by generations who literally got their first exposure to cruising from the show, and it helped make Princess a household name. So, it’s only fitting that ‘The Real Love Boat’ will pay homage to the original show and our company’s rich tradition, spanning more than 50 years, while at the same time creating an unforgettable, one-of-a-kind viewing experience for a new audience.”