Who Is Theresa Kelly? Where Is She Now? 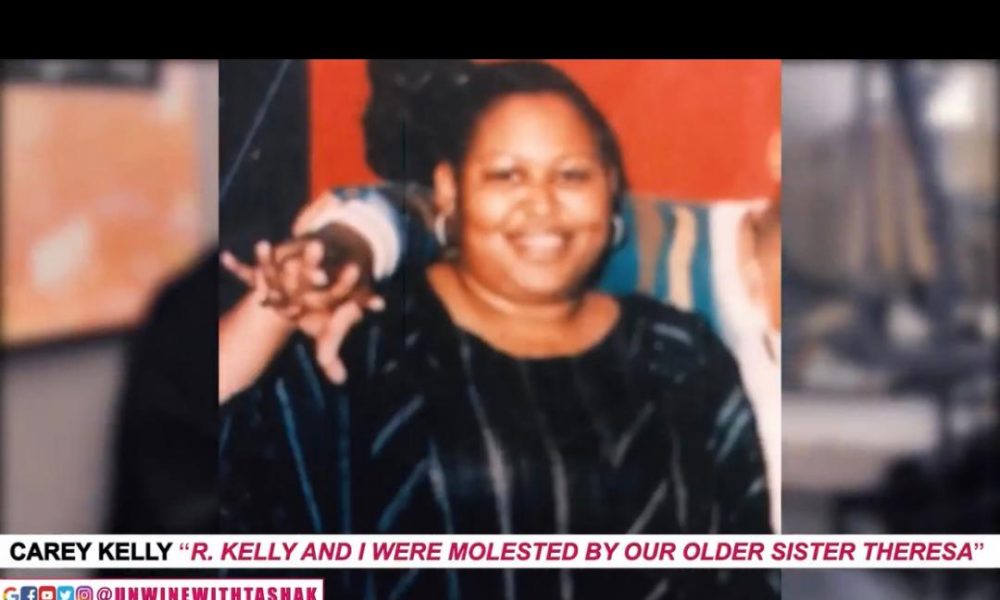 ‘Surviving R. Kelly‘ brought to the forefront the explosive accusations against the acclaimed R&B singer, R. Kelly. The documentary shines a light on the horrific deeds of Kelly, and the systematic abuse that he allegedly put several girls through. However, amidst all the allegations against Kelly, and the monumental proof of his actions, ‘Surviving R. Kelly’ also touches upon the abuse that the singer himself faced at the hands of a family member.

Notably, R. Kelly, and his younger brother Carey Kelly, went through years of sexual abuse at the hands of someone very close to them. Earlier in a 2012 interview with Tavis Smiley, Kelly had acknowledged the fact but did not name the abuser. In an explosive interview with YouTube vlogger Tasha K, Carey Kelly opened up about the abuser, naming his and R. Kelly’s sister, Theresa Kelly, as being the person responsible.

Naturally, you might be interested in knowing where Theresa Kelly, R. Kelly, and Carey Kelly’s alleged abuser, is at the moment, now that the spotlight is back on R. Kelly’s life, due to ‘Surviving R. Kelly Part II: The Reckoning‘. We have got you covered in that regard.

Who is Theresa Kelly?

Theresa Kelly is the older sister of R. Kelly and Carey Kelly. Born to Joanne Kelly, she grew up with the family in the Ida B. Wells Homes public housing project, in Chicago’s Bronzeville neighborhood. The Kelly family patriarch was absent throughout, so it fell on Joanne to provide for them. While the mother was away at work, it fell upon Theresa to look after her young siblings.

According to Carey, Theresa first molested R. Kelly, when he was 7 and she was 13. Carey got molested when he was 6, and Theresa was 16. She started abusing them when entrusted with the babysitting duties. Part of her strategy was to let Bruce, the second oldest sibling, go out to play. However, R. Kelly and Carey were ‘punished’, which required them to be with her inside the house. Theresa always took care to separate the two, meaning that Carey was never present when R. Kelly was molested, and vice versa.

While Carey believes that the singer went through the same molestation, he could not speak for his brother. The interview, however, goes into graphic details about what Theresa did to Carey. She made him perform oral sex on her, and when he started crying, she performed oral sex on him. Carey also alleged that Theresa had sexual intercourse with him. The abuse went on for years and the last Carey saw Theresa, was at their mother, Joanne’s, funeral in 1993. Their last conversation was in 2008, when Carey ‘forgave’ Theresa for molesting him. However, the latter denied that any such thing had happened.

According to Carey, R. Kelly took it differently. He got along with Theresa even after the fact, because he saw it as an instance of him losing his virginity. Carey stated “I believe that Robert took it as she opened up a side of him or showed him some things before any other woman had… I think that’s what made him the monster he is today. I believe she opened up Pandora’s box.”

Where is Theresa Kelly Now?

As is evident, Theresa put her siblings through a lot, and might even be held accountable for part of R. Kelly’s own behavioral patterns. While Theresa likes to keep a low profile and avoid the public eye, we know from Carey’s interview that she grew up to be a woman of God. She has attended several of R. Kelly’s concerts, with her pastor and congregation.

Eventually, Theresa moved to Aurora, Illinois, which is about an hour away from Chicago, by road. Theresa is 58 years old today and since she does not use social media, her current location or status remains largely unknown. There have been reports stating that she has children of her own and that she works as a stylist.

Some claims have been made that Theresa might have changed her name after the attention she inevitably started to get, following Carey’s accusations.

In conclusion, we know for sure that she last moved to Aurora, and denied having sexually abused Carey as a child. Interestingly, the social media ire against Theresa Kelly resulted in a few innocent person being heckled after they were mistaken as R Kelly’s sister. Hopefully, Theresa will come forth soon, and address the allegations against her, and be held accountable, accordingly. In the meanwhile, the netizens are bound to keep looking for the Chicago-born, on social media.