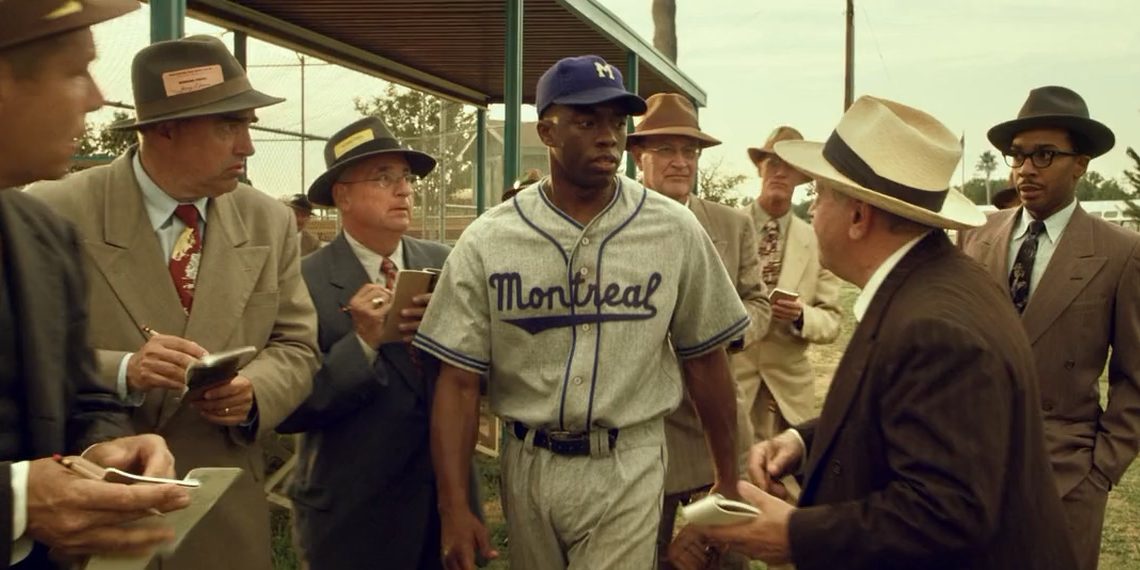 With Brian Helgeland in the director’s chair, ‘42’ is an enthralling 2013 biographical sports drama about the world of baseball. The story revolves around legendary baseball player Jackie Robinson, chronicling his struggle to find ground in Kansas City Monarchs. He becomes the first black athlete to play in Major League Baseball (MLB) during its modern run. Most of the story unfolds in stadiums, locker rooms, and grounds, and the movie showcases a significant number of stadiums. However, you may be curious to know where the movie was filmed. If that is the case, let us prepare a detailed map.

‘42’ was filmed in its entirety in the US, especially in and around Georgia, Tennessee, Alabama, and New York. Principal photography commenced on May 14, 2012, coming under wrap by July 18 of the same year. Don Burgess, the cinematographer of ‘Forrest Gump’ and ‘Cast Away,’ handled the camerawork. At the same time, Richard Hoover, the production designer of ‘Payback,’ worked his magic on the production. Let us now take you to the specific locations where the movie was filmed.

In their countrywide filming schedule, the cast and crew visited the township of Hiram in the Paulding County of Georgia. Several interior segments were lensed at the premises of the Atlanta Film Studios in Paulding County. Located at 110 Thompson Road in the community of Hiram, the studio facility is fully equipped with updated technology. Apart from the biopic, the studio aided the production of the pilot episode of AMC’s ‘Halt and Catch Fire.’

A chunk of filming took place in Macon, a populous city in central Georgia. Apart from its geographical significance, Macon is famous as the former house of the Allman Brothers Band and its archaeological significance. Some scenes were also filmed in and around Atlanta, Georgia’s capital city. In the 21st century, Georgia has established itself as one of the significant cinema industries in the country.

The production crew visited Alabama, where they captured several scenes in the sprawling city of Birmingham. The iconic Alabama city showcases a confluence of cultures. History permeates the city, which is also one of the state’s central cultural and economic hubs. The cast and crew members lensed a few sequences in the historic Rickwood Field.

Located at 1137 2nd Avenue West, the stadium is the oldest professional baseball park in the state. The location stands in for all the game scenes at Forbes Field, Roosevelt Stadium, and Shibe Park and shines as itself in the early scenes. The other stadium structures, such as Ebbets Field, Shibe Park, The Polo Grounds, Crosley Field, Sportsman’s Park, and Forbes Field, were created digitally through VFX.

For a considerable amount of filming, the production unit traveled to Chattanooga, a city in southeastern Tennessee in the foothills of the Appalachian Mountains. Most of the stadium scenes, as well as several other sequences, were filmed in the city. The cast and crew set up their base in Engel Stadium, an iconic 2-hectare stadium located at East 3rd Street in the city. Since its inauguration in 1930, the stadium has held countless games. Presently, the stadium is the property of the University of Tennessee at Chattanooga.

Additional scenes were filmed in New York City, a major global metropolis on the country’s east coast. While in the city, the crew filmed scenes in a property in Brooklyn, the central residential borough in the city. A private residence located at 526 MacDonough Street, at the intersections of Ralph Avenue and Patchen Avenue, lent its premises for filming a short sequence towards the end of the movie.