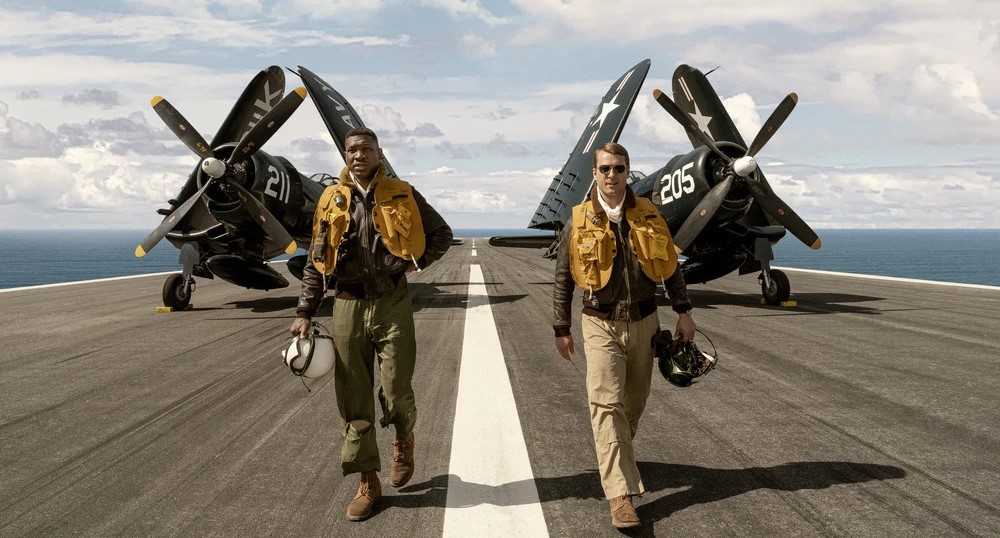 Based on the 2015 book ‘Devotion: An Epic Story of Heroism, Friendship, and Sacrifice’ by Adam Makos, ‘Devotion’ is a biographical war movie directed by J.D. Dillard that is set during the Korean War. It gives us a glimpse into the comradeship between two elite fighter pilots — Jesse Brown and Tom Hudner. The two naval officers work together and risk their respective lives during the war.

Given their sacrifices while fighting aerial battles against their enemies, Jesse and Tom earn enough respect to become the US Navy’s two most celebrated and revered wingmen in history. The biographical narrative includes the theme of friendship and war, making it an intriguing watch for different viewers. Meanwhile, the aerial shots of the fighter planes against the backdrop of exciting places make one wonder where ‘Devotion’ was shot. If you are paddling the same boat of curiosity, we have you covered.

‘Devotion’ was filmed in Georgia, South Carolina, and Washington, particularly in the Savannah Metropolitan Area, Atlanta, Bulloch County, Tybee Island, Charleston, and Wenatchee. As per reports, the principal photography for the Jonathan Majors-starrer commenced in early February 2021 with strict COVID-19 protocols in place and wrapped up in April of the same year.

To create realistic and practical effects for the movie, director J.D. Dillard used several real aircraft, including various F4U Corsairs, two F8F Bearcat fighters, an AD Skyraider, an HO5S-1 helicopter, and a MiG-15. As for the interior scenes of Jesse and Tom piloting the Bearcat fighters, they were recorded in a Hawker Sea Fury with its rear seat transformed to look like the cockpit of a Bearcat. Now, let’s look at all the specific sites that can be spotted in the war action movie!

Many pivotal sequences for ‘Devotion’ were lensed in the Savannah Metropolitan Area, which centers on the principal city of Savannah. The production team utilized different locales across the county, including the cities of Bloomingdale and Savannah, to record some key scenes for the movie. The streets in the downtown Historic District of Savannah also seemingly served as prominent shooting locations.

During the later stages of the schedule, the cast and crew members were spotted taping several significant portions in Atlanta, Georgia’s capital and most populous city. Located among the foothills of the Appalachian Mountains, Atlanta features some unique and versatile landscapes, including lush greenery, rolling hills, and modern architecture, making it a suitable filming site for different projects.

For shooting purposes, the team set up camp in Bulloch County, a southeastern part of Georgia. Statesboro served as one of the primary sites where scenes were lensed. To be precise, they utilized the Statesboro-Bulloch County Airport at 601 Statesboro Airport Boulevard in Statesboro for taping a significant amount of portions for the movie. The cast and crew built a set on an active runway, which was deactivated temporarily. Not just that, another runway was used to store and park equipment.

Additional portions for ‘Devotion’ were lensed in Tybee Island, a city and a barrier island just 18 km east of Savannah. Some key beach scenes were recorded on location near 3rd Street. It is the northeasternmost Sea Island of Georgia, where the US Air Force accidentally dropped an atomic bomb during a military training exercise in 1958. Given its history, it made for a suitable production location for the movie.

A few sequences for ‘Devotion’ were reportedly shot in Charleston, South Carolina’s largest city. Popularly known as the Holy City, it has hosted the production of several movies and TV shows over the years. Some are ‘The Notebook,’ ‘The Patriot,’ and ‘The Righteous Gemstones.’

The cast and crew of ‘Devotion’ reportedly traveled to Wenatchee, the county seat and largest city of Washington’s Chelan County. Situated at the confluence of the Wenatchee and Columbia rivers, the city is home to several parks and places for recreational activities, including the WRAC tennis club, many golf courses, soccer fields, and sites to hike, fish, and even hunt.