Where Was Hallmark’s Christmas in Evergreen Letters to Santa Filmed? Who is in the Cast? 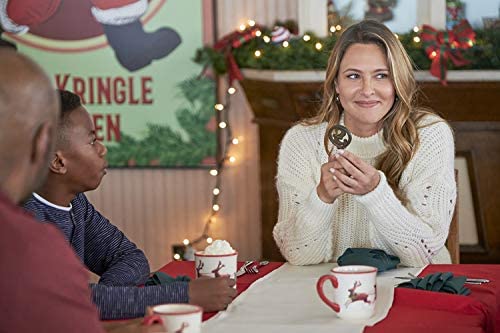 Directed by Sean McNamara, Hallmark’s romantic movie ‘Christmas in Evergreen: Letters to Santa’ revolves around Lisa Palmer, a retail redesigner, who takes a trip to her hometown in Evergreen, Vermont, where she made the best memories in her childhood. Her fondest Christmas memories were centred around Daisy’s General Store. However, much to her chagrin, the store had been closed for over a year and is supposed to be sold off. To make the store more appealing to buyers, Lisa brings life and Christmas back to the historic store. She gets Kevin, a local contractor, to work with her on the beautification of the store, with whom Lisa falls in love.

Amidst the restoration of the store, the staff at the local Kringle Kitchen found a mysterious letter dated 25 years ago in the general store’s Mailbox to Santa. They attempt to uncover the mysterious letter to Santa. The marvelous visuals of the lights, decorations, and colors of this movie are a treat to the eyes. In case you are curious about the actual location of the quaint town of Evergreen, and whether the Hallmark Christmas movie was shot in Vermont, we have got you covered. Here’s everything you need to know!

‘Christmas in Evergreen: Letters to Santa’ was filmed in British Columbia, mainly in Burnaby. Though the film is set during the time of Christmas, filming took place in September 2018. British Columbia acted as the perfect stand-in for Vermont. The westernmost Canadian province is renowned for its favorable climate, beautiful landscapes, vibrant culture, and lively way of life, which contribute to the festive mood of the Christmas film. Now, let us look at the specific locations that appear in the holiday romance movie!

Major parts of ‘Christmas in Evergreen: Letters to Santa’ were filmed in Burnaby, British Columbia. The fictional town of Evergreen was created by the crew in the historic Burnaby Village Museum, located at 6501 Deer Lake Avenue. The Burnaby Village Museum, formerly the Heritage Village, is a recreation of a 1920s village with 31 full-scale buildings; costumed staff members perform traditional trade demonstrations. The museum’s grounds are 10 acres. Some of the structures were transferred and renovated from other parts of the community and are original historic structures. Others are replica structures built to hold specific exhibits and relics, such as an interurban tram from the 1912 British Columbia Electric Railway.

The entire Heritage village was revamped with 14 to 28 tons of shaved ice made into snow for the film shot in September 2018. The cast had to dress in heavy coats and winter wear when the weather in September was almost 80 degrees. The decorations inside a bakery, which acted as the Chris Kringle Kitchen, were brimming with sugar cookies in the shapes of snowflakes and trees, and the storefronts were decked out in garland and lights.

‘Splinter’ star Jill Wagner essays the role of Lisa Palmer, the retail redesigner who comes to her hometown in Evergreen to celebrate the festive season. Jill has also played notable roles in productions such as ‘Braven,’ ‘Teen Wolf,’ and ‘Stargate: Atlantis.’ Opposite her is Mark Deklin as Kevin, the protagonist’s love interest and the local contractor. Mark Deklin’s notable works include productions such as, ‘Designated Survivor,’ ‘Grace and Frankie,’ and ‘The Good Fight.’

Read More: Where Was Hallmark’s The Sweetest Christmas Filmed? Who is in the Cast?