Who is Angelina Torres? Christmas With You Tribute Explained 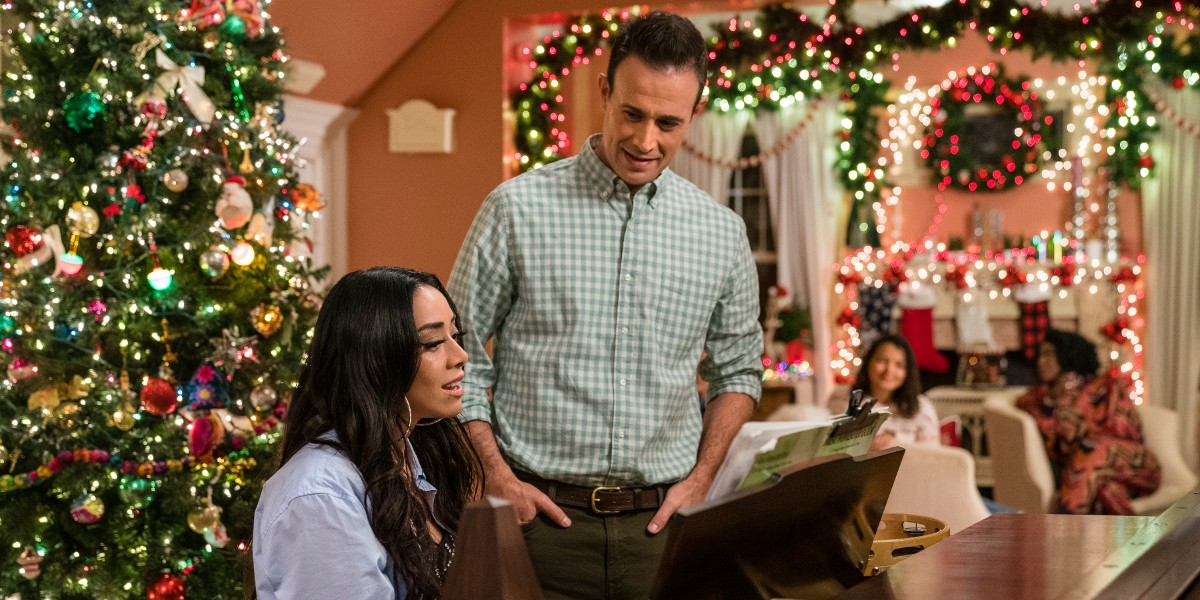 Netflix’s ‘Christmas With You’ is a romantic comedy film starring Freddie Prinze Jr. and Aimee Garcia. It is directed by Gabriela Tagliavini and follows Angelina (Garcia), a famous singer struggling to maintain her relevance in the modern age of social media. However, when she accidentally meets Miguel (Prinze Jr), a music teacher, Angelina finds a new musical spark to write a Christmas song. As Angelina and Miguel work on the song together, romance blossoms, but various challenges lie in their path to union.

The heartfelt and feel-good dramedy is full of jolly Christmas spirit and foot-tapping music and makes for a good family watch. The ending credits dedicate the film to Angelina Chavez Torres. Therefore, viewers must be curious to learn more about the person whose memory inspired the movie. In that case, here is everything we know about Angelina Chavez Torres mentioned in ‘Christmas With You.’ SPOILERS AHEAD!

Who Is Angelina Chavez Torres?

Angelina Chavez Torres’ name appears after the conclusion of the film’s story, at the start of the credits. The film is dedicated to the memory of Angelina Chavez Torres, making her an essential part of the film’s credits and emotional quotient. Chavez Torres is the mother of the film’s producer German Michael Torres. The movie was written by Paco Farias, Jennifer C. Stetson, and Michael Varrati and is based on a story by Michael Torres. Therefore, the film is highly personal for the producer known for movies such as ‘The Amityville Murders’ and ‘Truth or Dare.’

Chavez Torres sadly passed away before the film’s release. In ‘Christmas With You,’ the protagonist is named Angelia and could be a reference to Michael Torres’ mother. Similarly, the narrative reveals that Angelina’s mother has passed away, making her feel sad during Christmas. Michael Torres’ personal experiences post his mother’s death might also be the inspiration for Angelina’s backstory. Therefore, it makes sense for the producer to dedicate the movie to his mother’s memory.

How Did Angelina Chavez Torres Die?

Angelina Chavez Torres was born on October 2, 1938, in Hayden, Arizona. She is the daughter of Octaviano Duran Chavez and Soledad Romo Chavez. She was one of the couple’s eleven children and had eight brothers and two sisters. Angelina was married to German Torres, and the couple spent nearly 50 years together. The couple had five daughters; Sylvia Brill, Angelina Cannon, Anna Marie Ybarra, Elishevah-Elsa Torres, and Yolanda Torres. The couple’s only son is film producer German Michael Torres. Angelina was a devout Christian and raised her children in the faith. However, not much is known about early life or occupation.

On July 24, 2020, Angelina sadly passed away in North Hollywood, California. She was eighty-one years of age at the time of her passing. However, the exact cause of death has not been shared with the public. A funeral for Angelina was held on August 05, 2020. She is survived by her five daughters, one son, eight Grandchildren, and five Great Grandchildren. Pierce Brothers Valhalla Memorial Park and Mortuary, located at 10621 Victory Boulevard, North Hollywood, is her final resting place. Angelina’s love for her friends and family is reflected in ‘Christmas With You,’ which is dedicated to her memory.

Read More: Where Was Netflix’s Christmas With You Filmed?