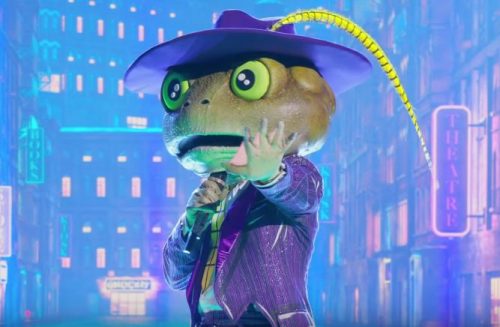 ‘The Masked Singer‘ Season 3 has introduced us to a new batch of participants, who appear to be better and more energetic than the previous group. It would not be an exaggeration to state that Group B is stealing the show and our hearts away, at the moment.

One of the wackiest participants in Group B has been Frog. The identity of the person behind the mask caused much speculation, especially with the bold choice of attire. Now that we have been introduced to Frog’s clue package, and heard him perform MC Hammer’s “U Can’t Touch This”, fans might be wondering about the clues and guesses surrounding Frog’s identity.

Don’t worry, we have got you covered in that regard. Besides, we are attaching the clue package below, so you can see if anything jumps out at you.

Frog gives us several verbal and visual clues in the package. We see a newspaper headline that reads “Tadpole plucked from large creek!”, and the participant tells us that he leapt to stardom as fast as a lightning bolt. However, he had to slither with the big frogs and do his best to survive, which did not leave him many options to do things his way.

He has also stated that his metamorphosis has not been typical, and he wants a chance to evolve his image. We are treated to visual clues like a bag of leftovers, a microphone with a thumbs-up sign, $106, and a poster for the 1996 Olympic games.

Going by these clues, most viewers, ourselves included, are inclined to believe that it is Bow Wow, the rapper. Almost all the clues fit him. The reference to tadpole plucked could be a nod to how early Bow Wow started rapping at the age of 6. Another clue mentioned is that ‘frogs are jumping’ (visible on a newspaper headline). This could refer to Bow Wow’s appearance on a song, “Jumpin’ Jumpin'” by Destiny’s Child.

His reference to slithering with the big frogs could mean how Snoop Dogg discovered Bow Wow, even giving him his rapper name, Lil’ Bow Wow. The bag of leftovers we see is also called a doggy bag. Now, Doggy Bag is the name of Bow Wow’s second album. Similarly, the 1996 Olympic poster itself does not tie in, directly. However, that year the Olympics was held in Atlanta, which is where Bow Wow is from. Lastly, the $106 could refer to the BET show, ‘106 and Park’, which Bow Wow hosted. You can check out a tweet below, where a fan has reached a similar conclusion.

Frog is 100% Bow Wow. $106 for 106 and Park, leftovers bag bc his second album was “Doggy Bag” AND he’s short. At this point I’m convinced I should be a judge. #MaskedSinger pic.twitter.com/8dfmfHMf1s

While Bow Wow seems to be the most popular guess, some other names have also been thrown into the ring. These include Chris Smith, of Kriss Kross, since there was a ‘jump jump’ reference in the clue package, and one fan has even guessed it might be MC Hammer himself. Naturally, the Chris Smith guess is much better thought out, as you can see from the tweet below.

Among the two other guesses that are worth mentioning, one fan believes that Frog might be Jimmy Jam or Terry Lewis from Janet Jackson’s ‘Alright’ video. Check out the tweet below, and you have to admit, there are some similarities in the attire.

Is the Frog Jimmy Jam or Terry Lewis?! That clip has alot of references to @JanetJackson Alright video. #MaskedSinger pic.twitter.com/qoOPTMrLe9

Lastly, there has been another guess that Frog might be Usain Bolt. After all ‘bolt of lightning’ could refer to a runner. Notably, this is derivative of panelist Jenny McCarthy’s guess, who thinks Frog might be Michael Johnson, the runner who broke the 200 and 400 meters sprint records at the ’96 games. His record, in turn, was broken by Bolt in 2008. Check out the relevant tweets below.

Could the frog be usain bolt??? #MaskedSinger

Undoubtedly, in the upcoming episode, with more clues and, an additional performance, we will be able to narrow down the Frog’s identity. Stay tuned for updates.

Read More: Who is Banana?