Who Is John Graff in The Watcher? Did He Really Kill His Family? 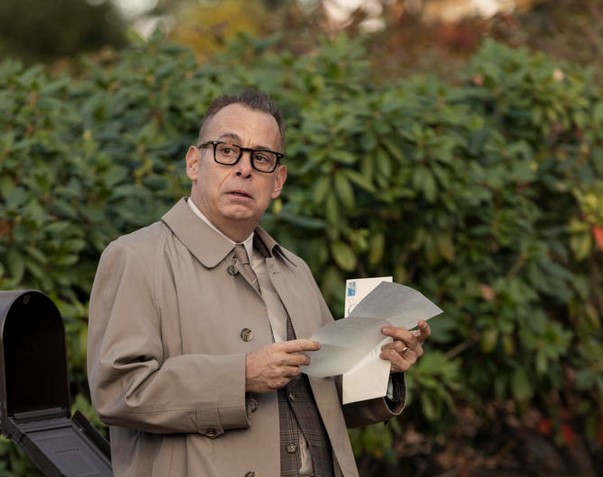 Portrayed by Joe Mantello, John Graff is an important character in Netflix’s ‘The Watcher,’ a true crime miniseries based on author Reeves Wiedeman’s 2018 article, published in New York magazine’s The Cut. The series revolves around Dean (Bobby Cannavale) and Nora Brannock (Naomi Watts), a couple from New York who buys their dream house in Westfield, New Jersey. However, their dreams soon become a nightmare when they start receiving letters from someone identifying as the Watcher, who claims their family has watched the property at 657 Boulevard for generations.

John Graff makes his first appearance in episode 3. Dean finds a stranger in the kitchen of his home, who introduces himself as John, the building inspector. Later in the episode, Dean learns about John Graff from Theodora, the PI he hires to find out the identity of the Watcher, and eventually makes the connection between John Graff and the building inspector he met in his kitchen. Here is everything you need to know about it. SPOILERS AHEAD.

Who Is John Graff?

John Graff is introduced in perhaps the most dialogue-heavy, dense scene of the series. He has a long monologue in which he speaks about the Fourth Turning. On the surface, it has little to do with the plot of the series, but if the Fourth Turning is indeed supposed to signify the coming of a major crisis, Graff’s introduction serves a similar purpose. In real life, the mystery around the identity of the Watcher remains unsolved even today. However, while the show doesn’t provide a concrete answer either, it heavily insinuates that the Watcher is Graff.

After his eerie introduction, we learn more about John Graff from Theodora. The Graff family lived at 657 Boulevard until 1995. Like Dean and Nora, John received letters from the Watcher as well. He eventually killed his two children, wife, and mother before disappearing. The local residents forced the authorities to bury the case, fearing that the price of their homes would go down if the truth ever came to light.

It is heavily implied that Graff lived in the tunnels underneath his former home for the next couple of decades. Only his neighbors, Pearl and her brother Jasper, knew about him. One of the renovators that Dean and Nora hire discovers the tunnel. Dean decides to venture into the tunnel, and Nora follows him. They even get a glimpse of Graff, but the latter evades them.

If Graff is the Watcher of today, he definitely wasn’t when he was the one receiving those letters. It is possible that the Watcher from that time has died, and John Graff has inadvertently become his successor. His association with Pearl can be used to explain why female DNA was found on the envelope. Perhaps it is she who leaves the envelopes in the mailbox of 657 Boulevard.

Moreover, the Watcher letter that Karen Calhoun receives after she becomes the owner of the house comes through the dumbwaiter, which is apparently linked to the tunnels, and Graff is one of the few people who has access to it.

In the show, John Graff did kill his family. Although Theodora tries to claim that she made the entire thing up, it is later revealed that she was lying at the time to spare Dean a life obsessing about an unsolved mystery. It seems that the character of John Graff is loosely based on a murderer named John List, who killed his three children, wife, and mother, on November 9, 1971, before disappearing like his fictional counterpart. He evaded capture for 18 years before his arrest in June 1989. He was subsequently extradited to New Jersey, where he was given five life sentences. List passed away In March 2008 in Trenton, New Jersey. He was 82 years old at the time.

Read More: Was The Watcher Ever Caught in Real Life?