Who is the Father of Angela Simmons’ Baby? 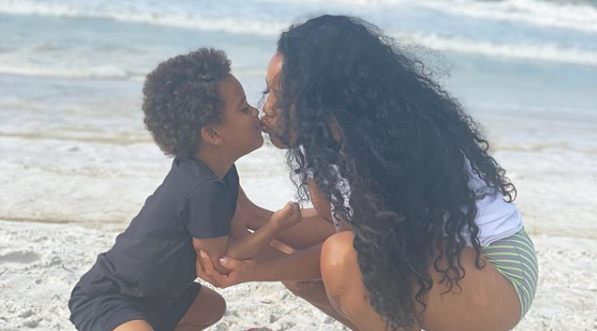 Angela Simmons is a self-made woman who has managed to turn heads in We Tv’s ‘Growing Up Hip Hop.’ The fashionista comes from a family steeped in hip hop royalty and has been the editor of magazines like Word Up!. Apart from Angela’s professional accomplishments, she is also the mother of a baby boy. However, her son’s father is no longer in the picture. So, who did Angela Simmons have a child with?

Angela Simmons might be linked to both Romeo and Bow Wow on the show, but she has a child with another man. Angela was engaged to Sutton Tennyson in April 2016 and welcomed their child, Sutton Tennyson Jr. in September that year. However, the couple broke off the engagement in December 2017, amidst rumors of cheating. Sutton was tragically shot and killed in 2018. Angela not only put out a heartfelt post at the time but also promised her late ex-fiance that she would take care of their son.

Who is Sutton Tennyson?

Sutton was an American businessman who has had several run-ins with the law. He was arrested and served time in prison back in 2000 for carrying a concealed weapon. Sutton has also faced the rap for credit forgery, identity theft, drug possession, and police obstruction.

Sutton was shot dead on November 3, 2018, following an argument with a man that escalated quickly. The assailant shot Sutton thirteen times outside his home. According to the autopsy by the Fulton County Medical Examiner, nine bullets penetrated him while four grazed or cut Sutton. Reports indicate that he was shot in his arms, legs, stomach, and chest. Three of the bullets caused immense damage to Sutton’s heart. Gunshots penetrated his spleen and stomach as well. By the time the police arrived, Sutton had succumbed to his wounds and the suspect had fled from the scene in a car. The shooter, Michael Williams from Atlanta, later turned himself in, to the police.

Despite Angela finding peace in the shooting of Sutton, it is clear both the mother and her son continue to miss the deceased man. You can check out a post she made where Sutton Tennyson Jr. seems to be having fun watching a video of his father playing with him. Apparently, he keeps replaying the video, which is bound to be a happy memory of his dad. [Cover Picture Courtesy: Angela Simmons/Instagram]