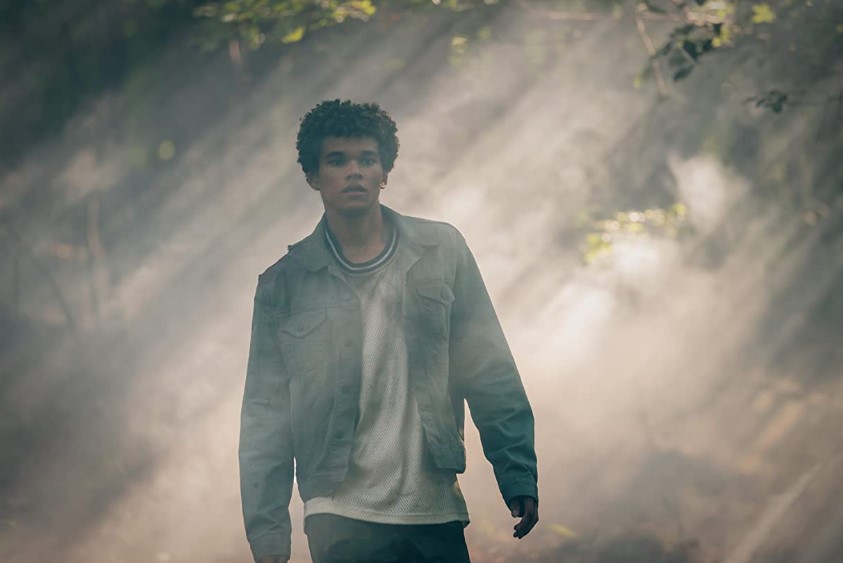 Developed by Jeff Davis, known for creating ‘Criminal Minds’ and ‘Teen Wolf,’ ‘Wolf Pack’ is a Paramount+ supernatural teen drama series based on the 2004 namesake book by Canadian author Edo van Belkom. The pilot episode, titled ‘From a Spark to a Flame,’ introduces the important characters and underscores the potential role they will play in the narrative. The show marks Sarah Michelle Gellar’s return to live-action television, portraying one of the main characters almost nine years after ‘The Crazy Ones’ was canceled. Here is what you need to know about the ending of ‘Wolf Pack’ episode 1. SPOILERS AHEAD.

The first episode is set in a small town in the Los Angeles County of California. A park ranger, whose name we later learn is Garrett Briggs (Rodrigo Santoro), discovers that the mountains and the forest have caught fire. The scene then shifts to a cacophony of car horns and people shouting. There is a school bus standing in the middle of that. Two of the four young protagonists are in there. Everett Lang (Armani Jackson) hails from an affluent mixed-race family. He is in therapy for several issues, and after you meet his parents, especially his mother, you realize exactly where some of those originated.

Blake Navarro (Bella Shepard) belongs to a blue-collar family. Sometime before the start of the series, her mother left home, and now it’s just Blake, her alcoholic father, and her younger brother Danny who is on the autism spectrum. As the fire spreads all around them, students watch as a large stampede of animals rushes toward the road, killing several people. Both Everett and Blake survive, but with bite marks on them.

With parts of the town evacuating, Blake convinces her father to shift them to a hotel or motel, trying her best to ignore the expanding bitemark. With the help of her brother, Blake notices something else as well. She used to have acne and acne scars, and now her skin is unsettlingly clear. Meanwhile, Everett has admitted himself to the hospital, though the medical practitioners there fail to recognize how severe the injury is. His parents arrive, and they see it as just a scratch.

Somewhere across the town, Harlan Briggs (Tyler Lawrence Gray), Garrett’s adoptive son, is at a club. Just when he starts making out with the DJ, his sister, Luna (Chloe Rose Robertson), arrives and reveals Garrett has gone missing. The twins also realize that something is different about them, even though it’s not the full moon. Harlan’s hearing and Luna’s sense of smell have suddenly increased, making them wonder what that means.

Everett and Blake start to have visions in which they see each other as if they are in the same room when they are on opposite sides of the town. They both feel drawn to what turns out to be Blake’s home. Just when they arrive there, they encounter a nightmare in a physical form — a colossal black werewolf. Blake’s neighborhood dog, Diesel, helps them fend it off, but the dog is no match for the creature. Diesel runs away soon after, and a desperate Everett discovers how strong he has suddenly become by punching through a wooden beam.

Later, all four young protagonists start to feel a pool. Their eyes turn white, and they run until they arrive at the same spot. Although Harlan has his reservations, Luna immediately recognizes that someone has turned Everett and Blake. They are now werewolves, just like her and Harlan.

As the narrative develops in episode 1 and the characters discover changes in their biology, the spreading inferno remains perpetually in the background. This is what brings LAPD officer Jason Jang (Lanny Joon) and LAFD officer Kristin Ramsey (Sarah Michelle Gellar) to the town. They believe the fire didn’t start naturally because of low precipitation, dry weather, and droughts. Ramsey thinks that a teenage arsonist caused the fire. She tells Everett as much as she speaks to him on the phone after he leaves the hospital. This means that there is a significant possibility that one of the students who were on the bus with Everett, including Blake, started the fire.

The actual answer is perhaps not that simple. It can be connected to the forest fire that happened 18 years earlier, after which Garrett discovered Harlan and Luna in a hole under a burned tree. As we are only in the pilot episode, the world-building just has begun. And van Belkom’s original is not much help in terms of providing clues because the story there is pretty straightforward. For all we know, there might be hunters and other supernatural entities besides werewolves in this world. Eighteen years ago, they burned down a forest attempting to kill a powerful werewolf. They tried to do the same again when they realized the wolf was back.

Who is the Werewolf? Is He Luna and Harlan’s Biological Father?

In the original book, a park ranger named Garrett Brock finds four werewolf cubs after a forest fire and adopts them. The values of a pack are instilled in the cubs as they grow up. The show creators have decided to do this a bit differently. Even though Garrett has been a loving, kind, and protective adoptive father for Luna and Harlen, the twins still lack the safety of the pack. However, with Everett and Blake, that can change now.