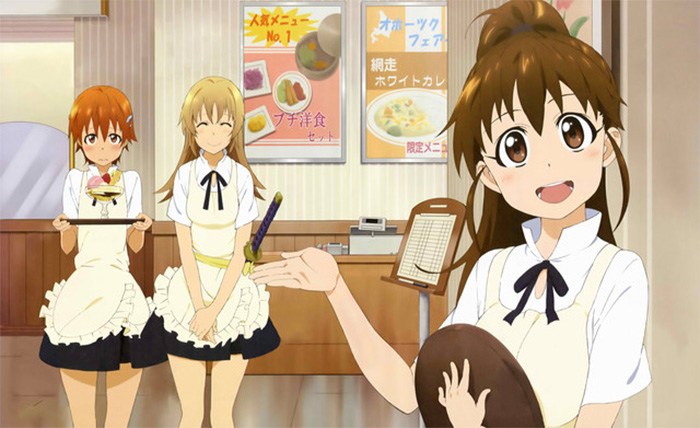 There isn’t much you can say about ‘Wagnaria’, also known as ‘Working!!’, if you simply go through its plot that revolves around a guy who works at a restaurant and encounters some really eccentric characters. There is actually nothing more to its plot and if you’re thinking of watching it, then don’t even expect anything more out of it. But despite the simple story, what’s really fascinating about the anime is its characters. They are like the driving force of every aspect of the show from its slice-of-life moments to all the comic relief that it offers. The characters take some time to evolve, but if you stick around till the end, you’ll notice that the eerie personalities of the all the characters simply grow on you and make you fall in love with at least one of them.

Apart from the characters, the art style is not all that impressive but is decent enough to make the anime enjoyable. Considering the fact that A-1 Pictures is responsible for the production of the show, most viewers expected a little more since the studio is very well-known for shows like ‘Sword Art Online‘ and even ‘Fairy Tail‘. Even then, the visuals are crisp and have the best possible colors that they could have. The voice acting of all the characters is simply spot on with both the original and the dubbed version. Even the energetic opening theme is just adorable and you’ll find yourself listening to the entire track before each episode. Overall, ‘Wagnaria’ starts off a little slow but later turns into a very entertaining comedy anime. It lacks a well-defined plot but once you’re done watching a whole season of it, you will realize that it does not need one.

Wagnaria Season 4 Release Date: When will it premiere?

As of now, it seems like the focus of the creators has drifted away from the main series and that’s the reason why the possibility of getting a season 4 seems to be less. Also, the final “special” episode that came out after season 3 gives a proper conclusion to the relationships of all the original characters of the main anime and at the same time, it also brings an end to the manga series that it follows. There isn’t much we can say about the future of the anime since its other versions have also been doing fairly well. So now would be a good time to catch up with the alternate stories that have been released, especially ‘WWW.WAGANARIA!!’ which has gained a lot of popularity in recent years. If we hear anything about Working season 4 release date, we will update this section.

‘Wagnaria’ has been licensed under NIS America, Inc but like most of like every other anime licensed by them, ‘Wagaria’ does not have an English Dub yet. You can still watch the subtitled version of it on Crunchyroll.

‘Wagnaria’ revolves around the eccentric staff of a family restaurant that is located in Hokkaido. This restaurant has pretty much all cuisines on its menu from Chinese to Japanese and even Western so that customers have several options to choose from. Popura Taneshima is a 17-year-old waitress at this restaurant who appears to be way too tiny for her age and also has a big complex around her childish looks. She is put in-charge to find a new part-time worker but has a tough time recruiting someone worthy. Later she finally turns to Sota Takanashi, a 16-year-old boy, who is just not able to say no to her. This is when he starts working at the restaurant and meets all the other people who work there.

One of these people is Mahiru who has this pathological fear of men and can’t help but punch every guy she ever meets. Then we have the manager Kyouko who always seems to be hogging on food. But much before all of this, Kyoko was once a gang member and had saved waitress Yachiyo from a bunch of goons. Since then, Yachiyo has had a lesbian attraction towards the manager and Kyouko has no clue about it. There are two cooks at the restaurant named Soma and Sato. Soma is a good cook but he is much better at blackmailing and manipulating others whereas Sota is simply in love with Yachiyo but he cannot do anything about it. The entire series simply revolves around the lives of all of these characters and all the comic situations they get in. Since the three main male characters of the series are named Sota, Sato, and Soma, things can get a little confusing in the beginning. But the quirky personalities of all these characters are enough to keep you entertained with their non-stop hilarious antics.

Souta Takanashi is a newly recruited waiter at the Wagnaria Restaurant. He is the main protagonist of the series and also has an alter-ego named Kotori that loves crossdressing. He is an athletic young man with medium-lemgth brown colored hair and big round glasses. He loves everything that appears to be cute and that is the main reason why he is not able to say no to Popura when she offers him a job at the restaurant. He believes that he will get to see her cute face more often if he works with her at the same restaurant.

Jun is a 20-year-old who works as the Head Chef at the Wagnaria Restaurant. He is a slim young man but has a very firm build and is often seen with a blazing cigarette during his breaks. Souma is apparently another cook at the restaurant who is supposed to help Jun but he never really does so. Because of this, Jun has to do all the work alone and he still never complains about it to anyone. He is the most hard-working employee in the restaurant and can always be seen doing something or the other inside the kitchen.

Hiroomi works as an assistant chef at the Wagnaria Restaurant but he never really does any work at all. Though he is very polite to everyone, he secretly spies on the people around him and then later threatens them that if they don’t do his work, he will reveal their deepest secrets to everyone. He is a self-proclaimed genius and everyone at the restaurant call him a sadist.

Popura is the main female protagonist of the show who works as a waitress at the Wagnaria Restaurant. She is a 17-year-old high school student and because of her petite stature, people assume that she is much younger than she actually is. She has long brownish hair that she ties up in a ponytail and despite her below-average height, she seems to be more confident than most girls her age.

Kyouko is the manager at the Wagnaria Restaurant who is first in command at the place. She is a tall woman with shoulder-length black hair and grey eyes. Out of all the employees who work at the restaurant, she does the least amount of work and spends almost all her time hogging on food.