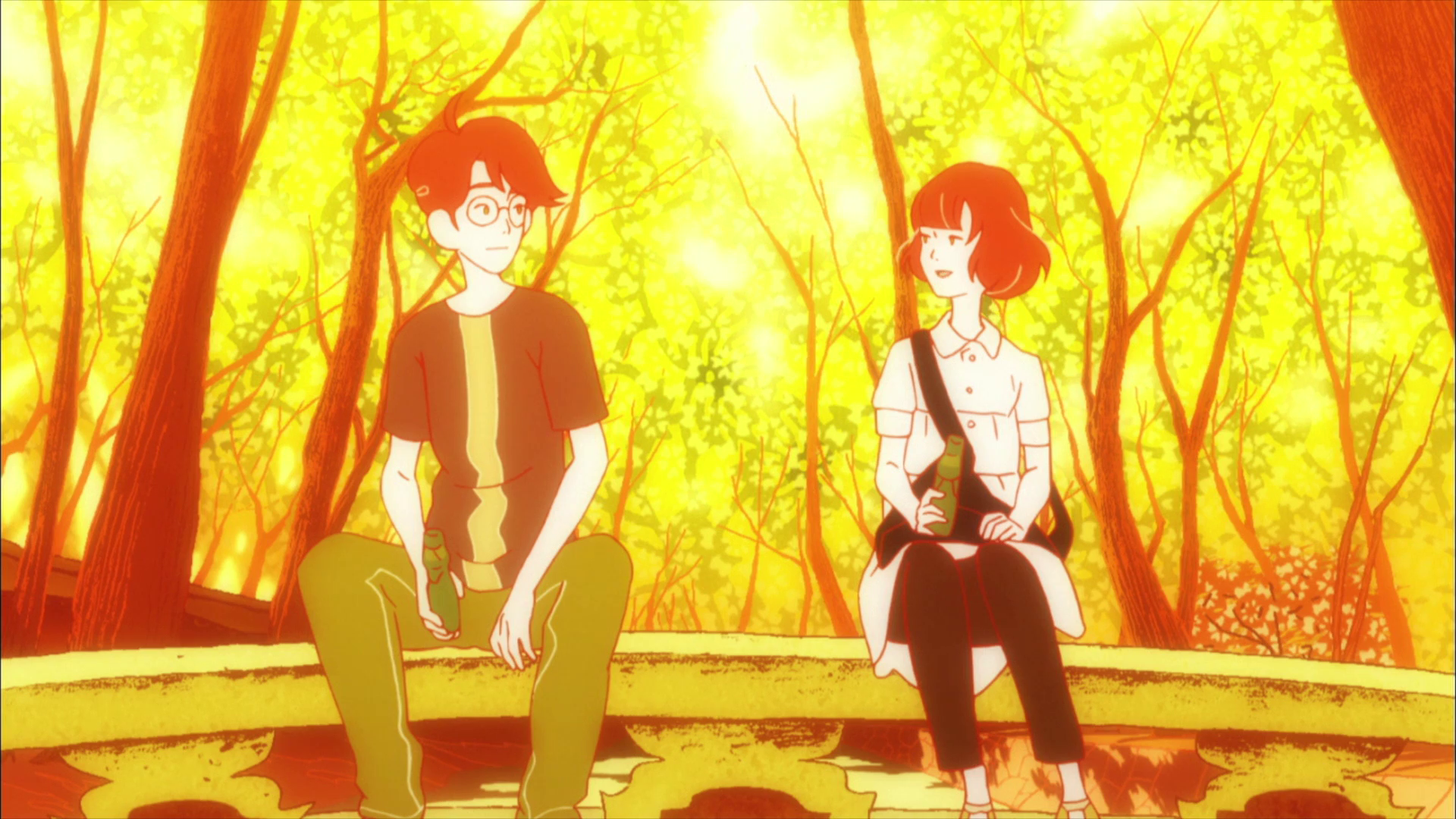 ‘The Tatami Galaxy’ or ‘Yohouhan Shinwa Taikei’ has been adapted by Yuasa Masaaki from a novel written by Morimi Tomihiko. Though the anime has received a lot of mixed reviews over the years, many viewers would still agree that it is nothing short of a masterpiece and every element of its production has been masterfully polished in such a way that nothing like it can ever be created again. While the story is pretty basic, the animation style is a dazzling spectacle that moves from one style to another in a matter of seconds, throwing dozens of visual metaphors at the viewers.

The show literally screams the true power of the animation medium and portrays how different it can be from your regular cinema. The best part about it is that all these visuals don’t exist in a vacuum as they bring the whole story to life by complementing it in one way or the other. I can actually go on and on about how overwhelming one’s experience can be while watching ‘Yohouhan Shinwa Taikei’ but to be honest, words cannot truly describe the experience of watching this anime.

So to put it in a simpler way, I would say that ‘Yohouhan Shinwa Taikei’ is basically a relatable fable about growing up and all the insecurities that come with it. It focuses on the unanswered questions that an individual has to go through only to accept the uncertainty of life later on. And all of this is depicted with such a brilliant and evocative style that is nearly impossible to avoid. I’m sure every single person has taken some time to muse over the choices they’ve made in life and have wondered if things would be any different if certain events in the past could be changed for good. ‘The Tatami Galaxy’ obviously does not answer these questions but it sure as hell brings in a lot more meaning to your life’s “What ifs?”

Tatami Galaxy Season 2 Release Date: When will it premiere?

Despite being one of the highest-rated anime, ‘The Tatami Galaxy’ stands out a bit too much with its bizarre art style and unique story. Even for a regular anime viewer, the anime’s structure can be very tedious and only the ones who are patient enough to stick around till the end will know its true capabilities. Sadly, that hasn’t been the case till now and the show is not as popular as it should be. Even then, lately, ‘The Tatami Galaxy’ has been getting a lot of attention and after all these years, it seems like the anime might finally get the respect that it deserves. And now that the show is on Netflix as well, the chances of getting a new season of it are even high as a lot of times, streaming services decide to produce renewed versions of shows themselves regardless of what the original producers think about it.

Madhouse Studio is known for producing some of the best-known anime like ‘Death Note‘ and ‘One Punch Man‘, so for obvious reasons, they would never really think about renewing an anime that is almost a decade old when they already have so much going on. But even then, if the show somehow manages to blow up sometime in the future, then even the Studio might just rethink about it. As of now, we just have speculations and there isn’t much we can say about its future. All we know is that ‘The Tatami Galaxy’ is a masterpiece and all those who appreciate its true value, will always be willing to go for a whole new season of it. If we get any official news regarding Tatami Galaxy Season 2 release date, we will surely update it right here in this section. Till then, you can always start reading the novel it has been adapted from.

A dubbed version of ‘The Tatami Galaxy’ does not exist and that too for a good reason. The lead characters of the anime speak extremely fast and it is almost impossible to create a dubbed version that goes fast enough to match the original pace of the dialogues. However, you can find the English Sub of the anime on Funimation. But before you start watching it, be warned that even the subtitles will move really fast and you’ll have to pause the show from time to time to catch up with what’s going on.

Watashi, the main protagonist of the show, stands all alone near a mysterious ramen-stand on a warm autumn evening. This is when he suddenly runs into a man who claims to be the God of Matrimony. This accidental encounter forces him to look back at his two miserable years of college where he would spend his time trying to break up all the couples at the campus along with his only friend Ozu. He pledges to make the most of the rest of his college life and even gathers the courage to propose an anti-social yet kindhearted girl named Akashi. But even this does not go in his favor and he is forced to spend the rest of his college days feeling all pathetic and lonely.

But then suddenly one day, he finds himself being thrown back in time and before he knows it, he is back to the beginning of his college life. With a second chance in his hand now, Watashi tries his best to make friends, find love and most of all, make the best out of his college life. But will this second chance make a difference or will he end up being lonely all over again?

Akashi is an introverted student who works in the Engineering department of the college. She is known to be a very introverted girl who avoids having any social contact with anyone. She is also very hard to approach and this is something Watashi realizes later when he tries to ask her out on a date. Akashi also has a paralyzing fear of moths.

Ozu is a ghostly looking character who is the main protagonist’s only friend. He is always up to something mischievous and is determined to make his own life as miserable as possible.

Watashi is a typical college student who often worries about wasting his life away and has this constant fear of missing out. He hates the fact that he hasn’t been able to live his college life like the rest of the students, who are busy socializing and going on dates. He really wishes to be more social and also wants to find love. But every time he makes an attempt to make his college life more fulfilling, something goes terribly wrong.

Read More in Anime Preview: That Time I Got Reincarnated As a Slime Season 2 | Dagashi Kashi Season 3