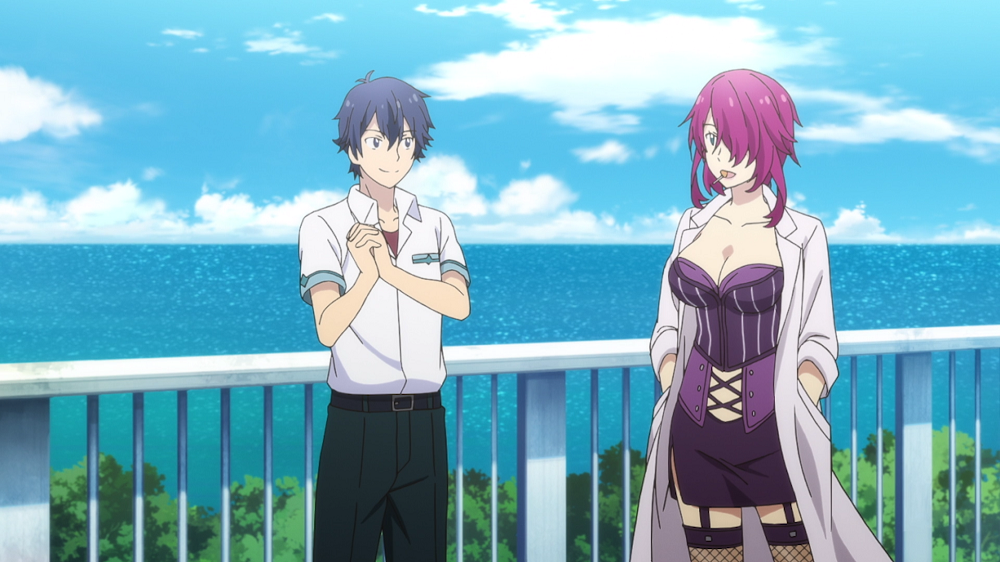 The story of ‘Yu No’ starts off as a slow burn that gradually grows on you with time. The series is not at all for the faint-hearted as it deals with a lot of dark and mature themes that most other sci-fi anime would shy away from. It is brutally realistic with everything that it offers and at the same time, it also maintains a sense of complexity to make sure that nothing much is revealed about the underlying mystery in just one go. With excellent pacing, the series makes sure that every major plot point is covered, with enough backstories to support it.

All the characters of the series have realistic human-like traits; they don’t always tend to do the right thing. Apart from the main character, even the other protagonists receive a lot of development throughout the series. Coming from Studio feel, which is known for producing anime shows like ‘Kiss X Sis‘ and ‘Mayo Chiki‘, the animation quality is just great. The backgrounds have been perfectly detailed and all the character models have been designed beautifully. Overall, while most anime shows struggle to adapt all the parallel stories of visual novels, ‘Yu No’ does a pretty good job and is able to showcase all the necessary aspects of the story with ease. I would highly recommend it to anyone who enjoys watching sci-fi shows.

Yu No Season 2 Release Date: When will it premiere?

‘Yu No’ Season 1 premiered on April 2, 2019 and with a total of 26 episodes, came to an end on October 1, 2019. The anime has been adapted from a visual novel and is also an alternate story of an OVA series that premiered back in the late 90s. The anime includes the same characters and alternate routes as the game series. While the game features a story that provides the first-person perspective of the protagonist, the anime focuses more on the relationships of the girls who surround the main character.

Even with this approach, in a span of 26 episodes, the anime should be able to cover everything that the original source has to offer. So it seems very less likely that there will be a whole new season 2 of the show. But since it’s a visual novel adaptation, we can expect several alternate versions of it in the future. If we get any news on ‘Yu No’ Season 2, we will update it here in this section. Till then, you should definitely check out our list of other similar sci-fi anime shows.

The English dub of ‘Yu No’ is available on Funimation.

‘Yu No’ centers around a young high school boy named Takuya Arima who suddenly becomes the hot topic of the school’s gossip after his father, a historic researcher, disappears. But things get stranger when during his summer break, Takuya receives a very mysterious package from his father. The package also contains a letter where his father tells him about the existence of several parallel worlds.

For obvious reasons, he believes that this is a joke of some kind and tries to ignore the package. But his undying curiosity gets him and that’s when he discovers that his father has sent him a device which will allow him to travel to different parallel dimensions. Now that he knows his father is still alive, he must now set out on a quest across several parallel worlds to find him.

Takuya Arima is the main protagonist of the series who attends the Sakaimachi Academy. His mother passed away when he was much younger and later, even his father goes missing after a rockfall accident during his research project. Takuya is pretty smart and when he receives first, he finds out that his father has been traveling from one dimension to another, he finds it really hard to believe it. For his age, he is fairly tall with a lean build and has short dark blue hair with grey eyes. In the present events of the anime, he stays with his stepmother but often dreams about his biological mother. After finding out about his father’s “death”, he really struggles to come to terms with it. There was a time when he used to be a very bright student who even loved to participate in sports. But later, all of his interests start fading away and he becomes more distant from the people around him.

Yu-no is the female protagonist of the series who runs into Taukya much later. She seems to be very mysterious and initially, nothing much is revealed about her origins. She is a cute young girl with long blond hair tied up in two pigtails and her eyes are blue in color. She is usually seen in short dresses that have bright colors along with long knee-length boots. She is kind to everyone around her and can always be seen with a faint smile on her face.

Mio Shimazu is another student at the Sakaimachi Academy, who is Takuya’s classmate. She is the head of the historical research club and has a keen interest in the paranormal. Being the daughter of the major, she is quite popular in school. She has long wavy light brown hair that she usually ties up with two clips on both sides.

Read More in Anime Preview: Are You Lost | To the Abandoned Sacred Beasts