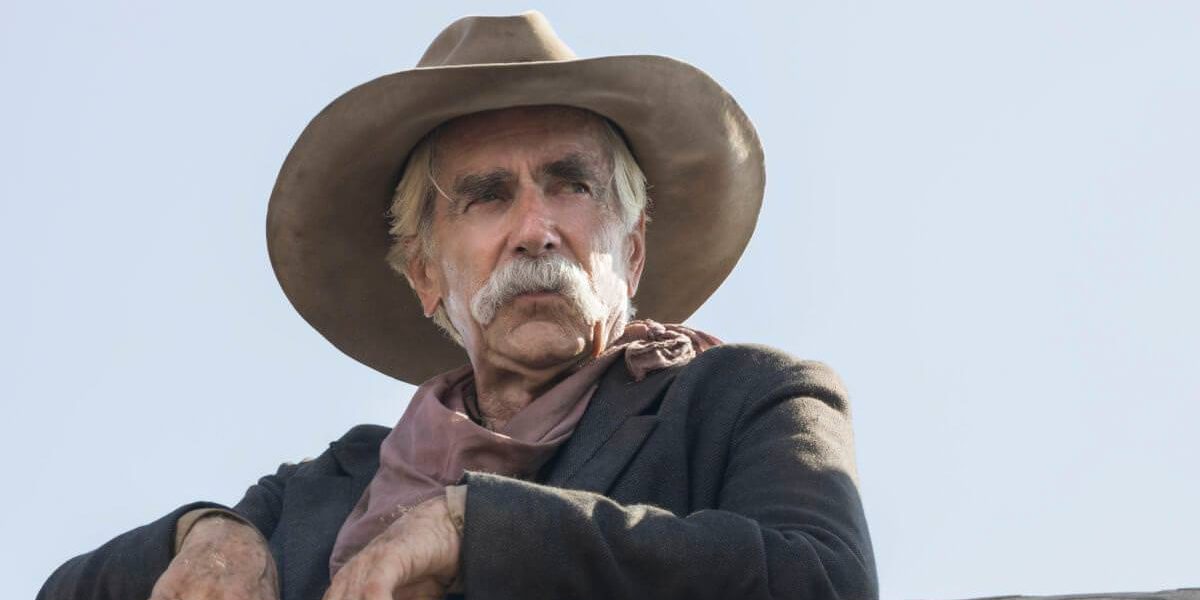 ‘1883’ is the origin story of the Dutton family, who in the present day own and operate the largest ranch in the USA. However, the road to that empire is a bloody and untrodden path walked by patriarch James Dutton and his family years earlier. The prequel series follows James and his family, who join a caravan led by Captain Shea Brennan (Sam Elliott) as they head in search of a new home away from the impoverished streets of Texas.

The first two episodes of the series premiered together, giving viewers an acute sense of life in the American West of the 19th century. The episodes introduce us to a diverse caravan traveling together with the same goal: search for a home. Without wasting any more time, let’s dig into the events of ‘1883’ episodes 1 & 2 to learn everything of consequence! SPOILERS AHEAD!

The series premiere episode titled ‘1883’ opens with a brief flashforward that introduces Elsa Dutton as the story’s narrator. The scene shifts to a house where viewers learn that the family of veteran cowboy Shea Brennan has passed away due to smallpox. After grieving the loss and burning the house, Shea contemplates suicide but decides to undertake a job that has been offered to him and his partner, Thomas.

While riding through the outskirts of Texas, the duo encounters James Dutton fending off a group of bandits. James heads to the nearest town, Fort Worth, where he is supposed to meet up with his family before heading up North. Shea and Thomas arrive in town to meet the group of European immigrants they are supposed to guide across the Great Plains to Montana. The pair decide to look for some cowboys, wagons, and supplies that will aid in the journey.

James’ family comprising of wife, Margaret, children Elsa and John, sister Claire, and niece, Mary, arrive in Fort Worth. They spend the night at a motel where a man assaults Elsa. James is forced to intervene and guns down the man. After initially refusing Shea and Thomas’ offer to join their caravan, James realizes the dangers on the road and decides to join the cowboys. The duo also recruits cowboys Ennis and Wade to help gather supplies and train the French-speaking immigrants for the arduous journey.

In the second episode titled ‘Behind Us, a Cliff,’ the immigrants led by Shea and Thomas settle at a camp by the banks of the Trinity River in Texas. The group requires some cattle for their journey, but the immigrants do not have the money. Therefore, Shea decides to round off some local wild cattle with the help of Ennis and Wade and a group of drovers led by Grady. James and Elsa also join the search for cattle due to the shortage of people who can ride horses.

While Shea’s group is away, a bunch of cowboys arrogantly enter the campsite and bully the women. Response from Claire instigates a scuffle between the cowboys and campers, with the former shooting many of the campers dead. Meanwhile, Shea’s group successfully leads a herd of cattle towards their campsite but finds out about the intruders.

Shea, Thomas, James, and Josef, an immigrant who can speak English, head to Fort Worth to find the culprits. The group approaches Marshal Jim Courtright (Billy Bob Thornton) for help. Courtright tracks down the cowboys led by Clyde Barker to a local saloon. Courtright kills Barker, and a shootout ensues. James, Thomas, and Shea take care of the rest of Barker’s men and walk out unscathed. However, Shea insists that they have bigger concerns to worry about.

1883 Episode 2 Ending: Why Do Shea and James Decide to Move the Camp?

After the gunfight at the saloon, Shea exclaims that they will have to act swiftly and move out towards the North. James is initially baffled by Shea’s decision. The experienced cowboy explains that the townsfolk will not appreciate outsiders like them entering and killing the residents of the town. Therefore, their lives and those of the immigrants will be under threat if they remain settled in the Trinity River Basin.

Although James argues that the campers aren’t fully prepared to undertake the journey, Shea insists that they will leave first thing in the morning. Shea’s decision is in the group’s best interest, and James understands as he does not wish to risk his family’s life. In the end, the caravan begins their journey North with Ennis and Wade also joining the travel party. The scuffle with Barker’s men is just one of the many dangers that lie on the road for the caravan. By acting swiftly and avoiding another such incident, Shea proves his wisdom is the need of the hour if the inexperienced caravan harbors any hope of safely making the passage.

Claire Dutton is the widowed sister of James Dutton, who is present while Barker’s crew attacks the campers. Her daughter, Mary, dies during the shooting incident, and her death deeply saddens Claire. When the group prepares to head North, Claire refuses to join them and decides to remain behind. James tries to convince her otherwise, but she expresses that she has nothing left worth living for, nor does she wish to make a fresh start. Claire understands the hardships of the life James has chosen but doesn’t wish to undergo further misery. Therefore, she shoots herself and ends her life.

James returns to bury Claire beside Mary’s grave, and Shea helps him out. Shea remarks that it takes courage to do what Claire did as he himself failed at suicide after his own family’s death. The fate of Claire and her daughter contrasts that of James’ family and shares parallels with Shea’s past. It is a subtle foreshadowing of the effects of the journey James is undertaking and the dream of freedom he harbors. Only time will tell if a similar tragedy occurs with James’ family.