Directed by Jason Bourque, ‘A Christmas Tree Grows in Colorado,’ originally titled ‘A Christmas Tree Grows in Brooklyn,’ is a festive romantic film that revolves around Erin, the director of community development for the town of Brooklyn in Colorado. To make it the ideal tourist destination, she aims to find the right Christmas tree for the tree lighting at the town square. Soon Erin sets her eyes on a tree that happens to be on the private property of a firefighter, Kevin Snyder.

Kevin is a single dad to his adopted daughter, Claire, and has no intentions of giving up the tree. As Erin tries to convince him, she grows close to both the father and daughter. Will she be able to give the town the Christmas she had in mind? With a storyline that revolves around making a picturesque town a coveted tourist destination, we were curious to know where it was filmed, and here’s is what we found out!

The principal photography for ‘A Christmas Tree Grows in Colorado’ took place in mid-2020, from July 20 to August 8, in British Columbia, Canada. Let us take you through the specific locations.

‘A Christmas Tree Grows in Colorado’ is extensively filmed in Hope, British Columbia, which doubles as the town of Brooklyn in the film. Hope is considered to be the base for any destination you want to head to in the Fraser Valley area since it is the meeting point of four major highways. However, the town itself is famous for outdoor recreational activities such as fishing, hiking, hunting, skiing, and water sports.

The movie was filmed at the height of summer, mostly in the downtown area, which was decorated with Christmas trees, bells, nutcracker statues, and faux snow to transform it into a Winterland. Filming was focused around the Wallace Street area and the team also filmed inside and outside some local businesses. You may recognize Cat’s Meow Toy Store, Hope Mountain Cafe, Kingpin Lounge, and Kimchi Restaurant. The production also included some locals as extras.

Vancouver served as another location for filming ‘A Christmas Tree Grows in Colorado.’ Located in the Lower Mainland region of British Columbia, the city is not only a cinematographer’s delight, but also the third-largest film production center in North America, earning it the title of ‘Hollywood North.’ Some of the famed film studios in the city are Vancouver Film Studios, Shoreline Studios, and Ironwood Studios. 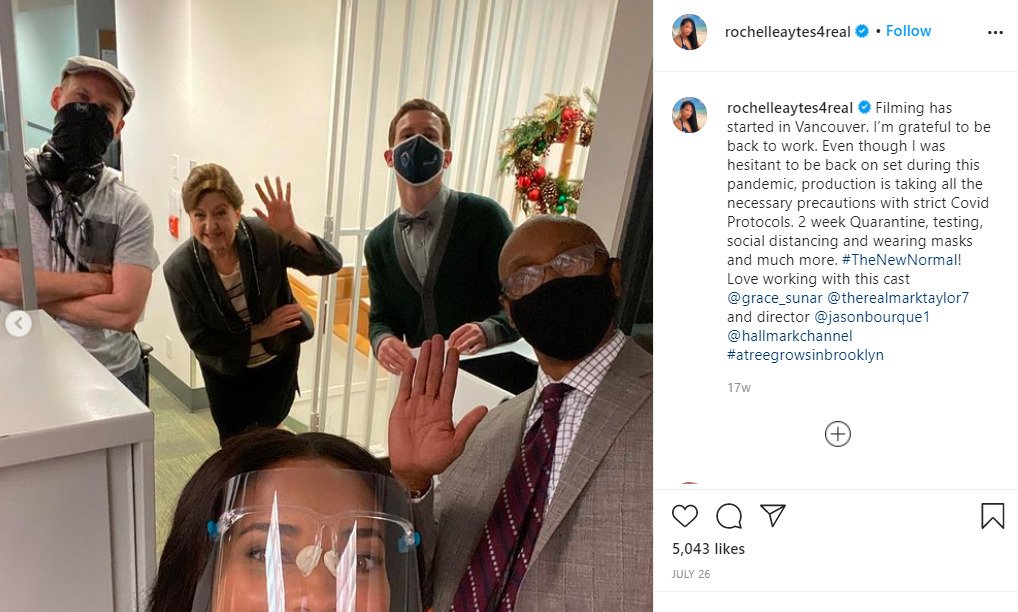 Some of the productions filmed in Vancouver are ‘Deadpool 2,’ ‘Star Trek,’ ‘Planet of the Apes’ series, and ‘Superman: Man of Steel.’ All safety and health guidelines were kept in mind since the film was shot during the pandemic. The crew was seen wearing masks, and sanitizer was available at multiple spots on the set.

Rochelle Aytes plays Erin in this film. She is best known for her roles in the series ‘Mistresses,’ ‘Drive,’ and ‘The Forgotten.’ You may also recognize her from her performances in ‘White Chicks,’ ‘Trick ‘r Treat,’ ‘Work It,’ and ‘Criminal Minds.’

Mark Taylor portrays the role of Kevin in this film. The Canadian actor is known for his roles in ‘Cinderella Man’ and ‘Who Is Clark Rockefeller?’ He also features in ‘Beauty and the Beast’ and the series ‘Degrassi: The Next Generation.’ Other cast members are Grace Sunar (Claire), Peter Bryant (Mayor), Mark Dozlaw (Steven), Jason McKinnon (Neil), Deborah Finkel (Linda Jamieson), and Liza Huget (Mary).