A Storm for Christmas Ending, Explained: What Happened Between Sara and Marius?

Netflix’s ‘A Storm for Christmas’ is a Norwegian miniseries directed by Per-Olav Sørensen. The show follows a group of passengers on their way to board flights to different destinations from Oslo airport. However, due to bad weather, all flights are canceled or postponed. As the passengers wait for the storm to clear off or find other means to reach their destinations, we see each person’s life and where they are in it. We see people’s struggles and how they overcome them to have a truly merry Christmas. Toward the end, characters such as Sara, Marius, and a few others reach a place where the future looks slightly ambiguous. So, what will happen to them? Here’s everything you need to know about the ending of ‘A Storm for Christmas.’ SPOILERS AHEAD!

A Storm for Christmas Recap

‘A Storm for Christmas‘ begin with a heavy storm that prevents all passengers from boarding their respective flights. As the travelers realize this, we see Marius, an old bartender, trying to get in touch with a doctor. He receives the information that the doctor will talk to him later in the night, and Marius resumes his job at the airport bar. Meanwhile, we encounter David, a man who is leaving for Málaga, where his wife is waiting for him. He talks about this with Ronja, a priestess, at the movie’s beginning, who suggests a dish David must try at Málaga. We also see a young girl called Sara sit near the bar, next to Marius, and wonder what gift she’ll give her father for Christmas. 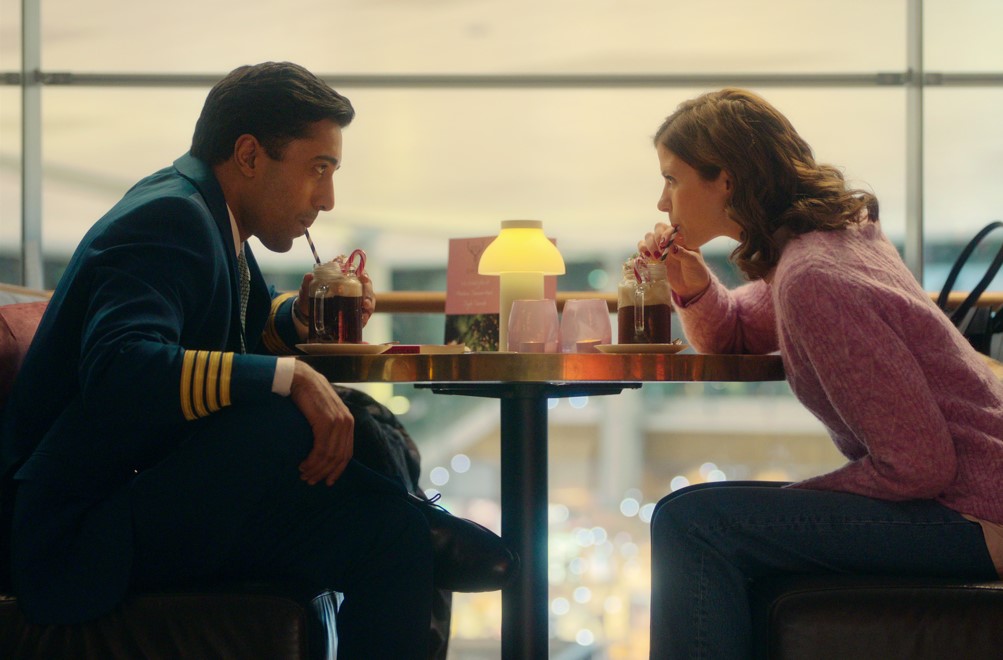 Apart from David and Marius, we see Bobbie and Ida stuck with their own challenges. Bobbie is a prominent lawyer who needs to be in London for a meeting. Although she tries everything she can, Bobbie ends up at the airport and bumps into Ida. Ida, a singer, seems to be on edge from the beginning. She doesn’t want to be seen by too many people, and when she gives an interview, Ida explains how lonely she feels and how she is never herself. As the series progresses, we understand more about all these characters – Marius, David, Sara, Bobbie, Ida, and several others.

Marius calls the doctor again, who says something that brings tears to Marius’ eyes. When he returns to the bar, he suddenly collapses, and an ambulance takes him to the hospital. David, who has been the most excited about going to Málaga, wonders if he should go. He thinks of canceling his ticket at one point but doesn’t go ahead. Bobbie, who volunteers at a homeless shelter on Christmas eve and provides food and drinks to the needy, sleeps there. She returns to the airport in the morning, bumps into Ida, and the two begin conversing. As the credits roll, we ponder a few questions about the characters and wonder about their future. Here’s everything you need to know.

A Storm for Christmas Ending: What Happened Between Sara and Her Father, Marius?

Marius had a girlfriend with whom he had a child, Sara. But after his girlfriend passed, her parents believed it was better for them to take care of Sara. So Marius had to let Sara go due to his poor financial circumstances. But Marius tried to get in touch with Sara, but couldn’t find her. However, Marius’ daughter Sara somehow manages to find him and reaches out to him at the airport. She keeps wondering what she must get him for Christmas without telling Marius that she’s his daughter. In the end, Marius suggests to Sara that whoever her father is, he’ll like a good pair of running shoes. When Sara buys it and returns to the bar, Marius collapses and is taken to the hospital. 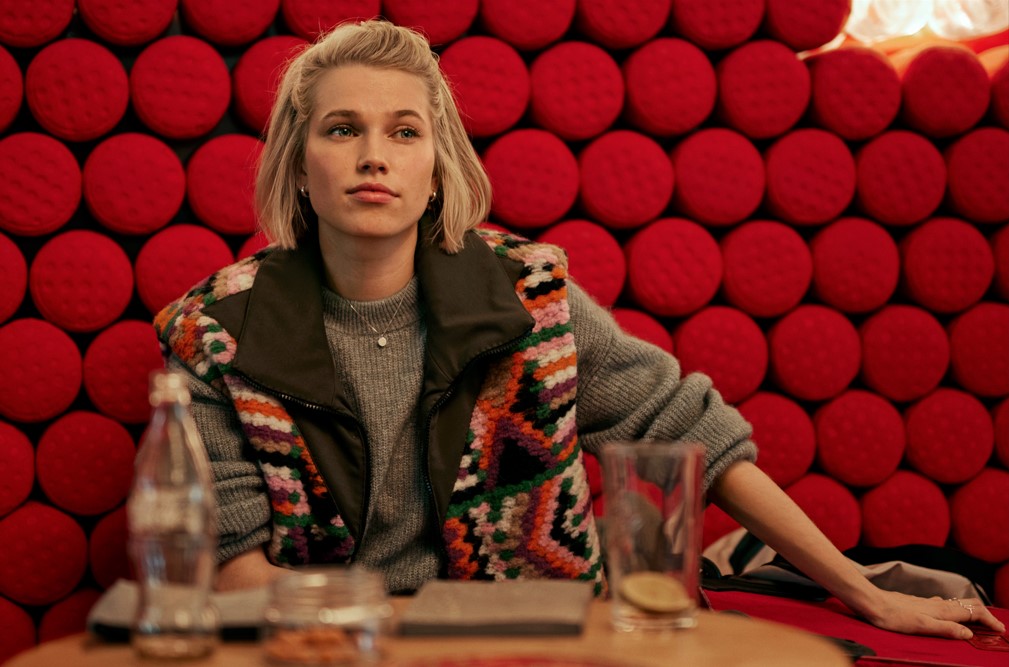 So, Sara goes to the hospital, and as Marius lies on the bed, she gifts him the shoe. Marius figures out that the girl is his daughter, Sara, and we see tears of joy in his eyes. Throughout the movie, we get hints that Sara might be Marius’ daughter. First, Sara doesn’t go anywhere around the airport like the others but comes straight to the bar where Marius works. It shows that Sara has a purpose for coming to the bar. Once at the bar, she interacts with Marius whenever she wants to drink or eat something. When Sara speaks with Marius, she gives him long looks but asks for simple things such as a beverage or some nuts.

Later, when David bumps into Sara and asks what she plans to give her father, it becomes evident that she doesn’t know. It seems as if she doesn’t know her father at all and is going to meet him, or she hasn’t seen him in a long time and doesn’t know who he is as a person. Later, we also hear Sara recall her childhood Christmas memories, wherein she and her father used to watch Christmas movies and fall asleep on the couch watching them. Sara tells this to Marius and nobody else, which could be on purpose too.

Marius will most likely die due to cancer. When Marius calls the doctor a second time, he repeats what the doctor says and mentions bone metastases which means that cancer has spread to the bones. He also uses the phrase more chemo, which affirms he has cancer and must undergo more chemotherapy. Toward the end, we see Marius vomit and collapse because of his cancer, and he is sedated with morphine. Although the series doesn’t show if Marius will live or die, he will most likely die. 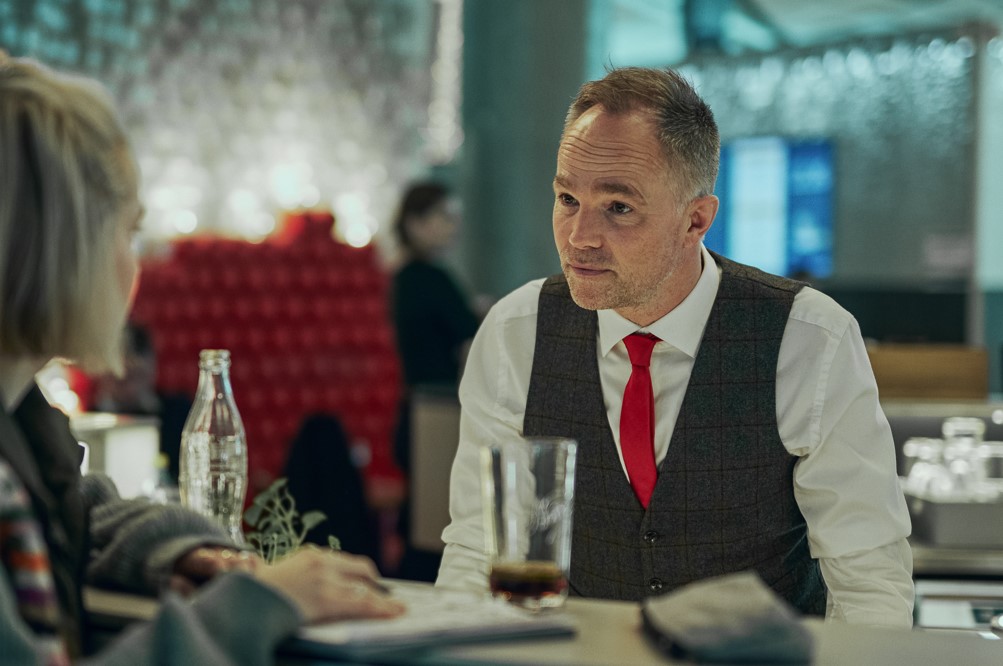 We can deduce that Marius will meet his inevitable fate from the statement he earlier used while talking about the shoes Sara must gift her father. Marius mentions that he doesn’t need shoes anymore, which indicates that he will never be able to go on runs again due to his condition and foreshadows Marius’ potential death. We also see him be extra nice to people, which usually happens when a person confronts their mortality. Furthermore, considering he collapsed, his condition is worsening. Thus, keeping all these facets in mind, Marius may succumb to his cancer.

Why is David Hesitant About Going to Málaga?

David is hesitant because his wife is not waiting for him in Málaga. David’s wife died six years ago at the airport, on Christmas eve, before going to Málaga with him. So, every year David comes to the airport and buys a ticket to Málaga but doesn’t go. David confesses this to Ronja, the priestess, when the two meet, and the latter figures that nobody is waiting for David in Málaga.

David seems to follow the same behavioral pattern as Marius. Since David is grieving the loss of his wife, he seems to be helping almost anyone he sees. After dealing with death, David finds everything else trivial and tries to be upbeat and cheerful to cover his inner pain. When Ronja realizes this, she thinks she could use some good company for the holidays and urges David to go to Málaga with her. Thus, after all these years, Ronja is a nudge for David to visit Málaga.

Will Bobbie and Ida End Up Together?

Bobbie and Ida might go on a date or sleep with each other. Earlier in the series, we discover how Ida’s parents never accepted her for being a lesbian. Hence Ida always feels lonely and needs to wear masks at all times. She fears not being accepted by others and dislikes showing her real self to the world. When Ida’s parents did not cope well with the revelation, Ida felt rejected, and she continues to carry it with her.

After realizing that her assistant, Ingvild wanted to be there for her since the incident, Ida figures that she can truly be herself. Thus, when Bobbie and Ida bump into each other at the end, the two share glances, indicating they are interested. Ida feels comfortable enough to explore her sexuality and will most likely go out with Bobbie.

Read More: Is A Storm for Christmas Based on a True Story?