Are Riley Christian and Maurissa Gunn from Bachelor in Paradise Still Together?

Against the backdrop of a dreamy coastal Mexican resort, ‘Bachelor in Paradise’, one of Bachelor Nation’s most popular shows, promises its viewers a peek into steamy relationships, devastating heartbreaks, free-flowing tears, and clandestine kisses. Much to the delight of fans, its seventh installment is no different. With almost 40 cast members this season, romance is heavy in the tropical air.

Naturally, fans were quick to note the sizzling chemistry and deepening bond between Riley Christian and Maurissa Gunn, which only kept getting intense as the seventh season progressed. If you, too, are wondering what their relationship status is now, we’ve got your back. Let’s find out!

Riley Christian had been a fan-favorite contestant on ‘The Bachelorette’ season 16 but was sent home by Tayshia Adams right before the hometown dates. On the other hand, Maurissa had been on ‘The Bachelor’ season 24 and was sent home by Peter Weber on the season’s first night. Riley, a 32-year-old attorney, and Maurissa, a 25-year-old patient care coordinator, eventually decided to try their luck again in ‘Bachelor in Paradise’ season 7.

The pair first met when filming for the show began in June 2021, and as far as we know, they had not been acquainted previously. In season 7, Maurissa had initially cozied up with Connor Brennan (from Katie’s The Bachelorette season 17), who gave her his first rose during week one’s Rose Ceremony. However, when Riley arrived at the Playa Escondida resort, Maurissa and Connor’s budding relationship immediately ended as Riley chose to take her on a date (pictured above).

Their first date involved celebrity host Lance Bass engaging them in a game of truth or dare — but with a twist that included eating unconventional food items (such as live bugs and cow’s tongue) upon leaving a question unanswered. Despite this, the two bonded over the date and supposedly even hooked up afterward in the Boom Boom Room. As the season progressed, Riley and Maurissa established themselves as a very PDA-loving couple (especially with their whipped cream segment!). 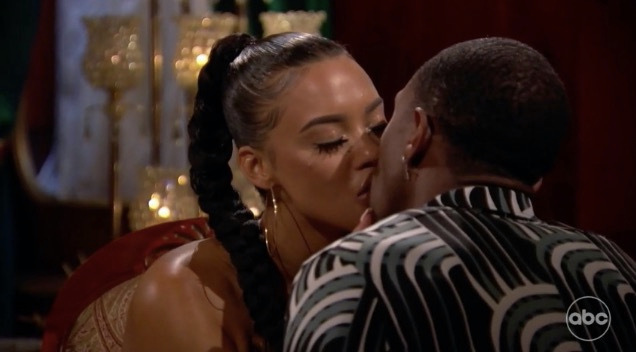 Fans could clearly see why Riley and Maurissa clicked – they even talked about having a big family and sharing all their Sunday mornings together. No wonder fans are rooting for them to make it to the end of the season and get engaged. However, ‘Bachelor in Paradise’ is notoriously known for couples that form a fantastic bond on the show only to have it fizzle out in the real world. Is the same notion true of this couple? Let’s find out whether Riley and Maurissa are still together!

Are Riley and Maurissa Still Together?

Yes! Fans will be pleased to know that Riley and Maurissa are still together and visibly in love. After their first date episode aired, Riley and Maurissa both posted photos of their date on their Instagram accounts. Since then, Riley has also posted a short clip from the show, wherein the couple had an emotional conversation regarding their personal fears and growing feelings of love.

In addition, Maurissa has also posted a picture of the two from the show, referencing their Sunday morning talk in the caption. The couple seems to be at a very comfortable stage in their relationship, with friends and fans cheering them in the comment section using heart emojis.

Riley or Maurissa hasn’t officially announced the current status of their relationship. However, if sources are to be believed, we can safely infer that Riley and Maurissa are still very much together and perhaps even engaged! But of course, we will have to wait with our fingers crossed for them to officially drop any update about their relationship!