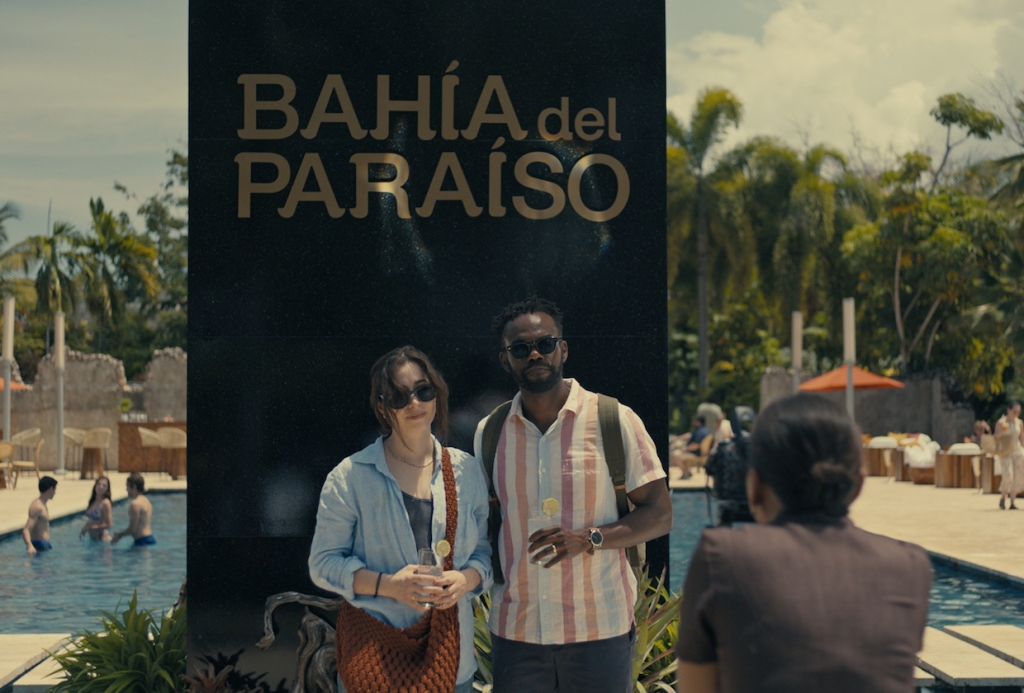 Peacock’s ‘The Resort’ is a genre-melting series about love, loss, mystery, and time travel. It primarily has two timelines. In 2022, Noah (William Jackson Harper) and Emma (Cristin Milioti) arrive in Yucatán, Mexico, for their 10th anniversary. The vacation is supposed to be a celebration of an important milestone in their marital life, but it becomes apparent that neither of them is particularly happy. In 2007, Sam Knowlston (Skyler Gisondo) comes to Yucatán with his family and girlfriend. Sam discovers that his girlfriend, Hannah, is cheating on him with her professor. He meets Violet Thompson (Nina Bloomgarden), a young woman who has come to the tropical holiday destination with her father. In 2022, Emma finds Sam’s phone, and it is revealed that Sam and Violet went missing 15 years earlier, a day before a hurricane struck and destroyed the hotel they were staying in.

Noah and Emma stay at the hotel Bahia del Paraiso and make it their base of operation as they attempt to unearth what really happened to Sam and Violet, and Oceana Vista Resort was the resort where Sam and Violet stay with their respective families in December 2007. If you are wondering whether either of them is a real hotel, we got you covered.

While the setting of ‘The Resort’ is Yucatán, the filming didn’t take place in the Mexican state. Instead, series creator Andy Siara (‘Palm Springs’) and his team predominantly shot ‘The Resort’ in various locations in Puerto Rico, including San Juan, the capital city and the municipality in the Commonwealth of Puerto Rico, and Culebra, an island and town situated off the east coast of Puerto Rico. Some scenes were also filmed in the Dominican Republic. Interestingly, there is an actual resort named Bahia del Paraiso in San Juan, so there is a significant possibility that the series might have been filmed there. The hotel Bahia del Paraiso is located at 186055 -65.710777, PR-18, San Juan, and offers a stunning view of Naguabo Bay.

Various members of the cast and crew shared photographs and video clips on their respective social media during the production, none more so than Luis Gerardo Méndez, who portrays Baltasar Frías in ‘The Resort.’ In May 2022, he shared a photograph on his Instagram with other members of the cast and crew after the production concluded for the series. Méndez wrote in the caption, “Last night in Old San Juan. Enamorado de esta compañía.”

‘The Resort’ has drawn some comparisons with ‘The White Lotus,’ the HBO satirical series also set at a tropical resort. “Just watch the first four minutes, because the first minute probably looks the same—it’s a couple arriving to a resort—but after they get the first margarita, it’s a completely different show,” Méndez told E! News about the comparison. According to Bloomgarden, their show has more things in common with ‘Twilight Zone,’ ‘Titanic,’ and ‘Jurassic Park’ than ‘The White Lotus.’

In ‘The Resort,’ much of the mystery is centered around Oceana Vista Resort. As mentioned above, it was destroyed by a hurricane 15 years earlier and now stands completely abandoned. In episode 3, Emma and Noah break into the property to find out whether Sam and Violet took a photo together in Baltasar’s room and encounter the latter. The hotel used to be owned by the Frias family in 2007. When Noah and Emma enter the property in 2022, it still belongs to the family. They see the family crest, the yellow snake with four noses, on the perimeter fence.