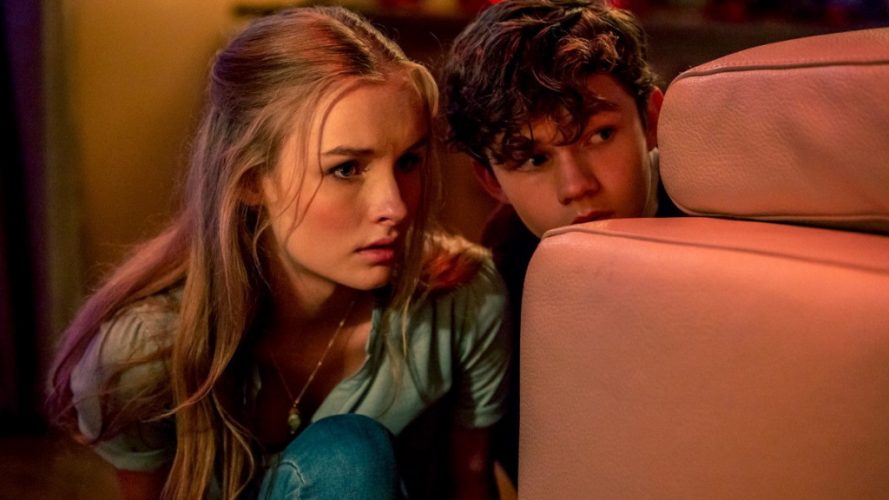 A lot of us don’t prefer watching horror movies but when a little bit of humor is added to these, they become more watchable. Some filmmakers might even stretch the boundaries of humor in these movies by making parodies that have more of comedy and less of horror. And then there are certainly other movies that are not intended to be funny but the horror in them is so ridiculous, they leave the audience laughing out loud. It’s been a long time now since ‘Shaun of the Dead’ came out, which was a refreshingly good horror comedy but the horror-comedy genre is not dead yet if that’s what you’ve been thinking.

There have been some new additions to this genre that you might like or hate. So if you’re in the mood for some scares along with some light humor, then scroll down and check out the list of really good horror-comedy films and TV series on Netflix that are available to stream. Some of them are old classics, while others are new movies that you’ll probably enjoy watching, just make sure you watch them before you judge them. 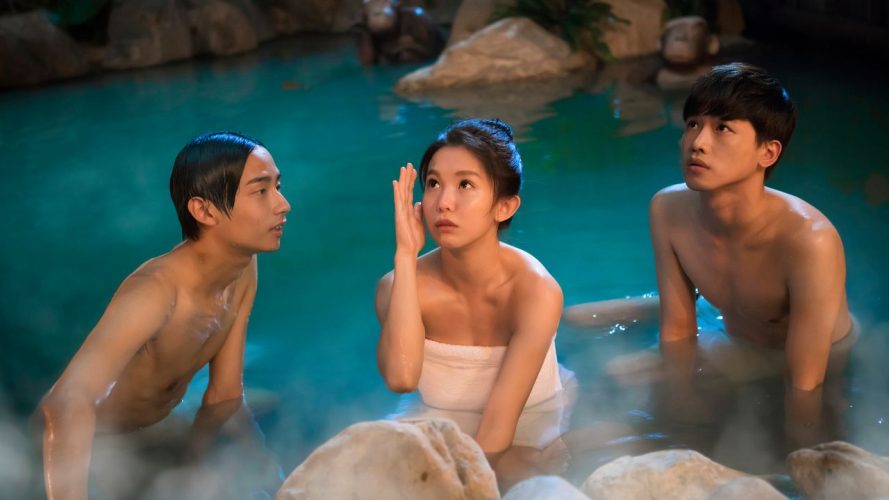 Xiaogin, the protagonist of this movie, gets tricked by his grandparents is forced to stay at a hotel that was founded by his parents. He gets followed by two of his best friends from school who want to escape the constant bullying at school. The three boys quickly find out that the hotel has some strange stuff going on and could potentially be haunted. The three get even closer as they uncover the mysteries of the hotel that holds some really dark secrets right under the steaming hot springs. The movie starts off a little scary but later becomes hilarious. Now, this is no brilliant Oscar-worthy film, but you’ll have a good time watching this Taiwan film. 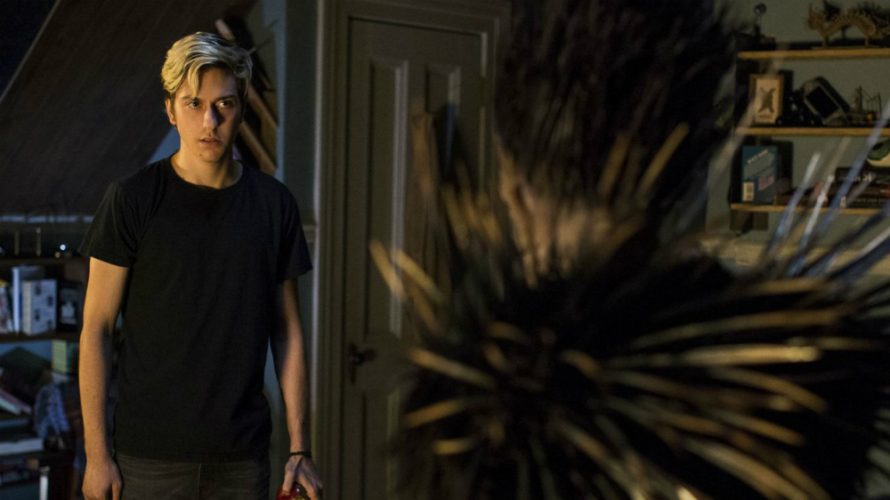 If you’ve ever had an anime watching phase in your life, then you probably do know about ‘Death Note‘ and if you’ve never had that phase even then you’ve probably seen or heard about this. And it is no doubt, one of the most brilliant anime series out there. But the movie, well… ‘Death Note’ came out in 2017 and as fans, most of us were excited to see how this would turn out. The story of a young genius named Light who comes across a notebook called the death note. This notebook holds immense power and the owner of the notebook can kill anyone just by writing the names of the people inside it (there’s a lot more to it, watch the anime series to find out). The anime was downright scintillating from the beginning to the end but the movie turned out to be rather disappointing. You can still watch it though because it does have a few scares and a few “L” jokes here and there. 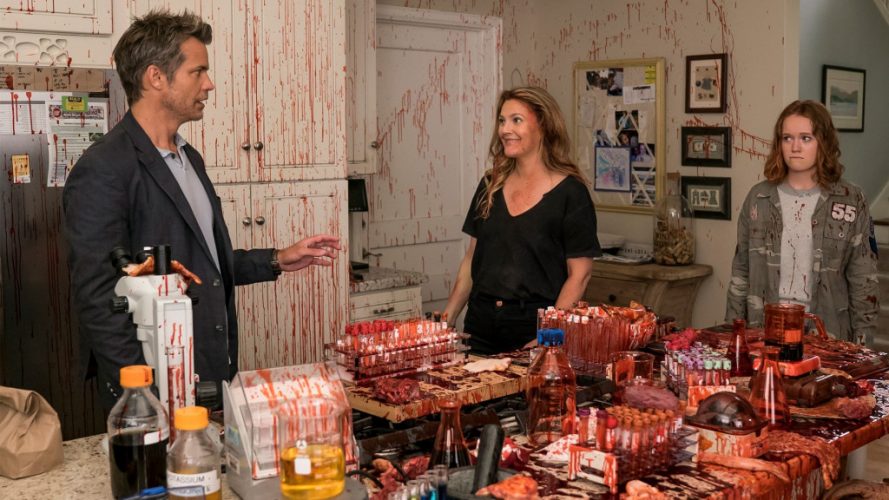 The only TV series we’ve included in this list but it surely does qualify to be one of the best you could watch in this genre. Starring Drew Barrymore and Timothy Olyphant, this comedy series is the story of a couple both of whom are real estate agents. Things take a very dark turn when the wife dies and is somehow back but obviously, she’s not the same (cliche alert). Apart from the cliched concept the series is actually quite fresh and has a lot of unexpected twists and turns to it. The actors thrive in their comedy roles and will surely make you laugh. The actors seem very natural in their roles and the strong point of this show is its uniqueness on the whole subject of coming back from the dead.

Four teens go on a holiday trip during their spring break. Once they reach their campsite, something horribly goes wrong and puts the four in the middle of a shit storm where they have to struggle to protect one of their most prized possessions, ‘The Package’. The movie is silly and stupid a lot of times but a perfect buddy comedy that will surprise you. The whole point of the movie is to just keep you entertained with its silliness and witty one-liners. The actors have done surprisingly well and if you’re looking for something to watch on your stoners night, then look no further.

Written by Mrighdeep Singh Lamba and Gautam Mehra, ‘Roohi‘ is a horror-comedy movie that stars Rajkummar Rao, Varun Sharma, and Janhvi Kapoor. The entertaining film follows Bahura Pandey and Khattani, two pals who are tasked to kidnap to kidnap the titular protagonist for marriage by a goon named Guiya Shakeel. Unfortunately, the dates for the nuptials are pushed forward; the two kidnappers are asked to keep Roohi in an isolated place. As the days pass, Bahura learns that Roohi is a possessed woman but still ends up falling in love with the abductee while Khattani, who refuses to believe his friends’ claim falls for possessed Afza. 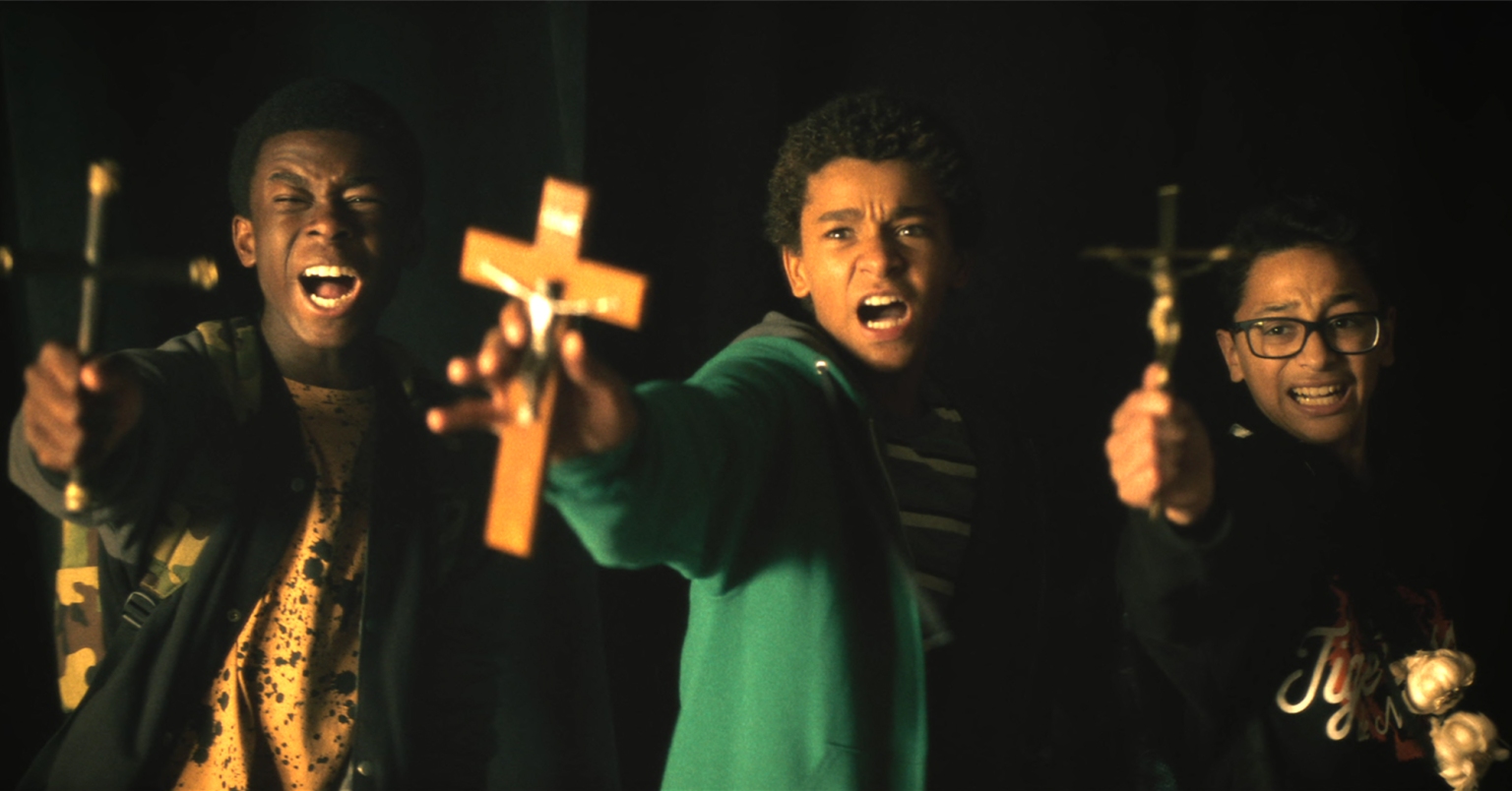 Directed and co-written by Oz Rodriguez, ‘Vampires vs. the Bronx‘ is a comedy horror film. The Jaden Michael and Gerald W. Jones III-starrer centers upon New York City’s northernmost borough of the Bronx, which has become increasingly gentrified ever since the real estate group Murnau Properties has started acquiring properties in the region. As if the social dilemma of the region was not terrible enough, in recent times, vampires attacks have become increasingly frequent. So, when three gutsy kids learn about a sinister scheme that can potentially destroy their neighborhood, they decide to fight back. 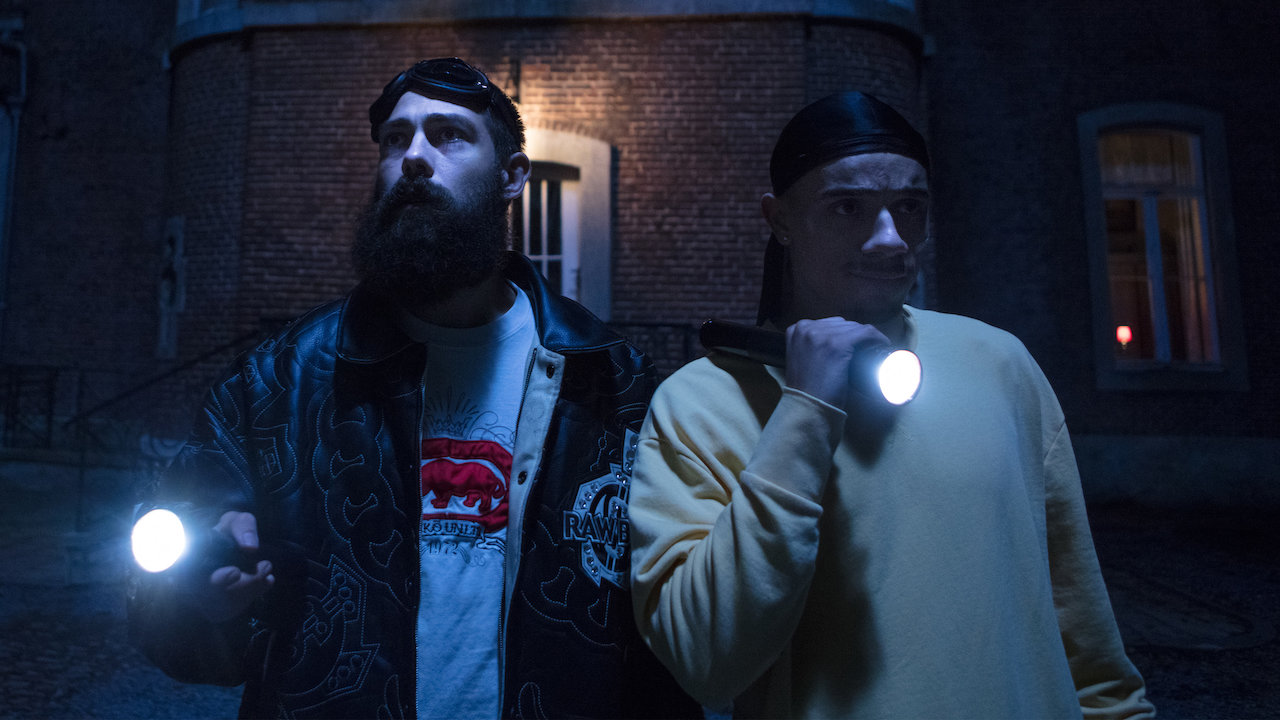 Tony T. Datis’s ‘The Mansion’ is a horror-comedy movie that follows a group of friends who decide to celebrate the New Year in an isolated manor house with no contact with the outside world. Although they are all excited about their plans, things soon take an unexpected turn when inexplicable occurrences begin to disturb their celebrations. It does not take long for panic to break out, and the festive atmosphere soon takes a dark turn when the first murder occurs. Now, the survivors must stick together to increase their odds of making it back to their homes, but only those brave enough could survive the dark night and live to tell the tale.

Starring Marlon Wayans, Jaime Pressly, Essence Atkins, and Gabriel Iglesias, ‘A Haunted House 2′ is a horror-comedy movie based on the characters developed by Marlon Wayans and Rick Alvarez. The Michael Tiddes directorial centers upon Malcolm, a young man who is eager to give himself a fresh start after being haunted by her previous girlfriends’ demonic possession. So, when he is moving into a new home with his new significant other and her children, it seems that Malcolm will finally find peace. Unfortunately, he soon finds out that the new home is also haunted, while the protagonist is followed by a demon who appears to have no plan of ever letting go. 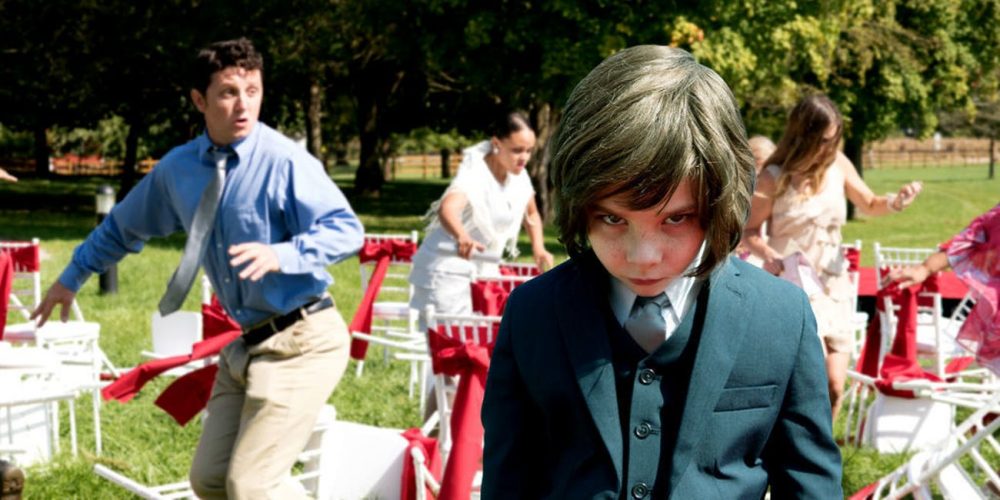 If you are a horror movie fan, then you have probably seen ‘The Omen’. Now imagine a funnier version of a movie with a possessed kid. Well, that pretty much sums up this one. One common thing that I noticed about most films in this horror-comedy genre is that they don’t really have a good rating. Now I understand the sentiments behind those ratings but I don’t understand what people expect out of these. These movies are made for the sole purpose of entertainment only. Like the other movies on this list, this one, too, is just a dark comedy that’s really good for a one-time watch. 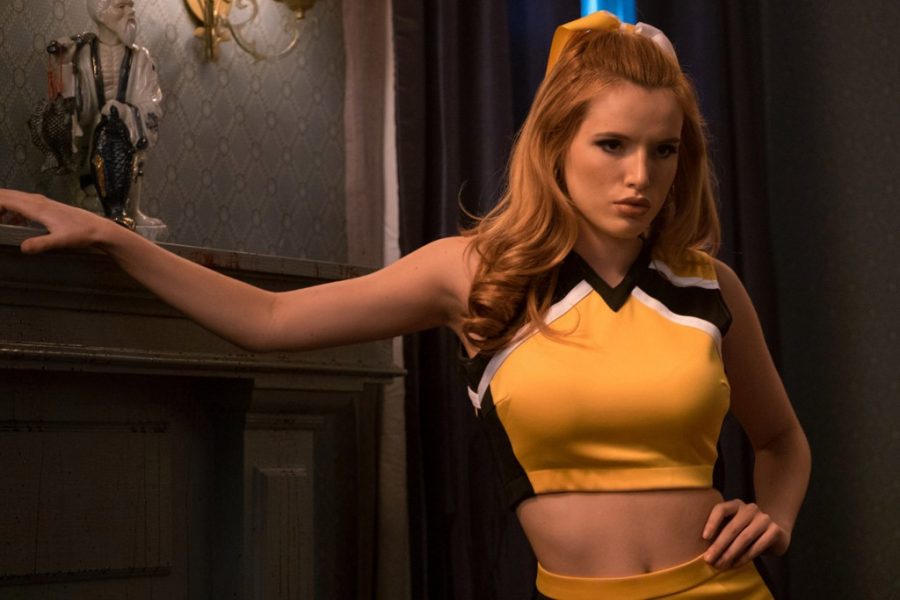 The last one on the list but probably one of the best. ‘The Babysitter’ is about a kid named Cole who stays up past his bedtime only to realize that his hot babysitter is part of a demonic antichrist cult. Cole has to now survive the night with a bunch of satan worshippers who will do absolutely anything to stop Cole from spilling out their little secret. This coming-of-age horror will keep you hooked the whole time and overall can be considered to be a good film in the horror comedy genre.