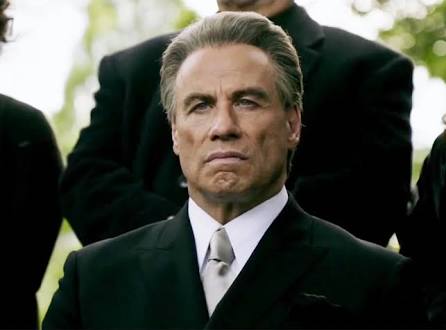 When John Travolta exploded, and it was an explosion, onto screens in he seventies he was instantly the biggest star on the planet. Oscar nominated for his first leading role in Saturday Night Fever (1977), Travolta was both actor, blazing with talent, and movie star, burning bright. For eight years he ruled the film industry and then he crashed and burned with Perfect (1985) a dreadful film about the obsession with body perfection. Though Travolta did not know it, he was career dead, finished.

Enter Quentin Tarantino who like so many, including myself, adored the film Blow Out (1981) and the actors profoundly brilliant performance in the picture. Against the wishes of everyone, the director cast the actor as Vincent Vega, a heroin addicted, not too bright hitman in Pulp Fiction (1994) and as fast as he had in the seventies, Travolta ruled Hollywood again.

Oscar nominated, he was back on top, even dancing on screen again in Pulp Fiction (1994) and in Michael (1995) in which he played a cocky angel. For a few years he was as hot as he ever was, and he was not, it stopped just as fast as it had started.

Through the course of his career he goes back and forth between great work and bad work. He is in a lull right now but could come back strong as John Gotta this fall. Here is the list of top 10 John Travolta movies.  You can watch some of these best John Travolta movies on Netflix, Hulu, or Amazon Prime.

“Look at me” he says because he is already looking at you, more through you than at you, and it is unsettling. He owns you, he intimidates you, and he will mess you up physically if needed, but he prefers to talk to you but first he demands you look at him. As Chili Palmer, a loan shark collector gangster, the actor gives a superb performance, projecting absolute confidence in everything he does. Like a fine chess player he leaves a Florida for Hollywood and within days in the midst of movie royalty spinning his web. Travolta won the Golden Globe (Comedy) for his performance in the film, earned rave reviews, but was, unbelievably snubbed for an Oscar nomination. I could not believe it, I still cannot believe it, so exceptional was he in the film, the very essence of cool.

Brian De Palma was the first director to cast Travolta as an adult, and the result was a performance that legendary critic Pauline Karl compared to Marlon Brando’s best work in the fifties and seventies, raw, real, and visceral. Cast as a B movie sound man he collects to use in movies post production work, in this case terrible horror movies. While gathering night sound one evening he accidentally records a murder and finds himself drawn into a political assassination gone awry. Knowing his life is in danger he begins piecing it all together, which places him in greater danger. Without paranoia throughout this tension filled masterpiece it is a Travolta who carries the film with his extraordinary lived in performance. Where was the Academy at year’s end?

His droll, grave performance as heroin addicted hitman Vincent Vega was his second career explosion, catapulted at once back into the A list of actors. Though beefier than he was in previous films, he brings a world weariness to his work, for though Vincent is a world traveller, he cannot shake the heroin or his life of crime. Tarantino was a huge fan by virtue of Blow Ou (1981) and fought to cast the actor in the film. Reaction out of Cannes was immediate, the film was hailed around the globe a masterpiece and Travolta Fever again swept the world. Watch his odd hesitation as he enters Mia’s apartment, as beautifully created as any silent acting Buster Keaton created.

So much more than just a disco film there was a film that became a touchstone for the seventies and the film of a generation. Trapped in a dead end job in Brooklyn, living at home, Tony is the king of the dance floor on weekends. The only time he feels truly alive is dancing but what can a kid from a blue collar background do with that? How can he ever cross that bridge into Manhattan? His friendship with a sometimes deluded young woman who has managed to get out helps give him the confidence to leave, all to the sound of the BeeGees glorious music.

Make no mistake, Jack Stanton (Travolta) is Bill Clinton. Based on the bestsellers, the film explores the road to the White House for the Clintons…um Stantons. He is a skirt chasing, donut eating good old boy with powerful friends who want him in the White House despite where he “puts his pecker” as Abby tells us. A born ladies man the future Mr. President just cannot help himself around women, any age, which gets him in all sorts of trouble. His long suffering wife deals with it because she sees the prize ahead of them both, a chance to make history. Travolta nails Clinton, the accent, the good old boy charm, the near constant eating but something deeper, in that we sense flaws aside he has he capacity to be a great man.

Though it is pure genre action it allows the actors to simply kick ass in their roles in which they are asked to become each other some of the time. Sean (Travolta) has been searching for the vicious terrorist Castor Troy who accidentally murdered his son several years before. When science comes up with a way to allow Sean to resemble Troy in every way he goes for it, but then Troy does the same leaving each man in the others world. Travolta has a field day impersonating Cage, and along the way gives a sensitive performance as a man trying to get revenge for his son, and yet as Castor with Sean’s face bring ruin to Sean’s family. Exceptional work from both actors.

Another under appreciated court drama that sees Travolta as a gutsy lawyer who takes his firm to ruin over a case he just cannot shake. Toxic poisoning is brought to him and the further he digs, the more corrupt it becomes, yet he refuses to give in, wanting to do something right. The actor brings great intelligence to the role, and has a wonderful chemistry with Robert Duvall as the counsel for the other side. Nobody saw the film, a shame, but it is one of the actors best performances.

One of his least appreciated but best performances as Bud, a young man from the south who comes to Texas to work in the oil refinery. There he falls hard for a young woman portrayed by the deeply erotic Debra Winger and they marry, and fight, and fight and finally break up. Believing the man she wants needs to be a real cowboy he trains on the mechanical bull and challenges the best in the state besting them. In the process he stops a robbery and wins back his wife, each realizing they love each other too much to lose one another. Travel outa seems right at home in Texas and never falters in the film.

Come on, it has to be here. As the high school, no kidding, bad boy Danny Zhukov, Travolta was nothing short of a revelation in the film as a hip swiveling, Elvis sounding, leather jacket wearing hood who falls in love over a summer with a good girl transplanted here from Australia. The long running musical was a Broadway tradition, and the film was a smash. Is it a masterpiece? Nope. But if Ryan Gosling deserved an Oscar nod for La La Land (2016) last year, Travolta should have been at least nominated for his Danny. Goofy, funny, vulnerable, in lust he is terrific throughout.