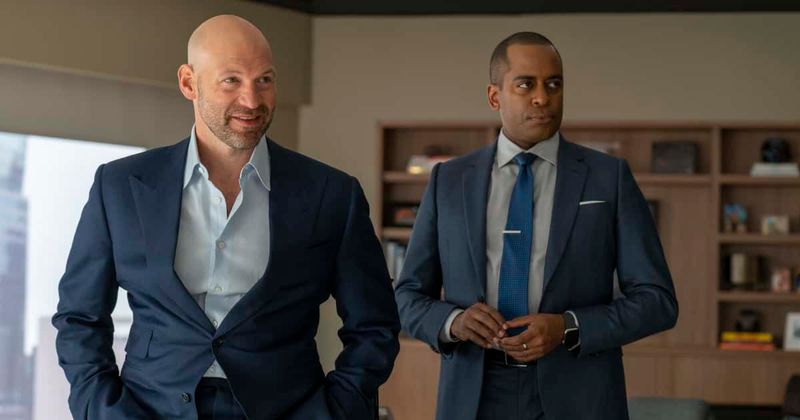 In ‘Billions’ season 6 episode 7, titled ‘Napoleon’s Hat,’ power dynamics shift as the countdown begins for the announcement of the Olympic venue. Chuck (Paul Giamatti) and his team learn about Colin Drache and zero in on him. In episode 6, New York declined Prince’s (Corey Stoll) offer of a new subway system. In this episode, Prince offers to renovate what the city already has. Chuck and Wendy (Maggie Siff) share a candid moment as they attend a charity event at their son’s school. Here is everything you need to know about the ending of’ ‘Billions’ season 6 episode 7. SPOILERS AHEAD.

In this episode, Mike still reels from losing to Chuck in the previous episode. He, along with other investors, prepares for upcoming fights. The city of New York refused his gift and decided to keep the old transportation system. Moreover, Chuck and Governor Sweeney forced him to donate over two billion dollars to the city. In episode 7, as Mike and his team close in on their objective, they become cautious and tentative, knowing that one mistake can bring down the entire operation.

Mike approaches the Metropolitan Transportation Authority with his proposal. Even though he is willing to pay for the entire project, the government wants to keep his private investment out of the MTA, especially with Chuck hounding him. But as always, Mike knows how to get what he wants. He meets with the board of directors of the MTA and pitches the idea of a complete overhaul of the city’s transportation system. Soon, the Mayor of New York shows up at the meeting and tries to put a stop to Mike’s plans. It’s an election year, and she doesn’t want to attract negative publicity toward her campaign.

Meanwhile, Chuck and Wendy spend some time together. In recent seasons, they have drifted more and more apart. In season 6, Chuck has transformed into almost a caricature of his earlier self. A potential path opens up for Chuck and Wendy to go back to where things used to be. However, they have spent so much time embracing the differences between themselves that they have forgotten how wonderful it felt when they were together.

Yes, New York wins the 2028 Olympic bid after much turmoil. Prince has known that the final hurdle in this endeavor would be the greed of the Olympic committee. Instead of outright bribing them, he acquires scholarships at his old university and distributes them among the committee members so that they can hand them over to deserving candidates. Recognizing the transaction for what it is — a sophisticated form of bribery — Chuck and his team discover Colin Drache’s name.

Dave is skeptical about getting a conviction. She isn’t even sure whether Mike is doing anything illegal. Chuck promises Dave that if they don’t find anything criminal at the end of the road, she can choose their next target. Like her current employer, Kate has to deal with her recent defeat. She realizes that Chuck will come after the scholarships and warns Mike. She also warns Wags about the high-end bordello he used to entertain the Olympic committee members. Both prove to be excellent advice, showcasing how well Kate knows Chuck once more.

Prince threatens to take his subway renovation plan to another city only to find that Sweeney and the mayor intend to use the two billion dollars they took from him to modernize the New York subway. What he doesn’t know is that Taylor has made a play against the MTA. It crashes the stock prices, leaving the city with no other choice but to accept Mike’s help. They also agree to build the railroad for the Olympic Express, which will take the tourists from the city to the venue of the game.

Eventually, it is announced that New York has won the hosting rights for the 2028 Summer Olympics. Prince, his fellow billionaires, and the people of New York begin to celebrate together. Chuck arrives with police at this very juncture, hoping to arrest Drache, but he discovers that he has vanished. There is a reason that the man has been able to avoid being detected by law enforcement all this time. He is virtually a ghost. After performing the task required of him, he vanishes into thin air without a trace.