After the explosive revelation that Mike Prince (Corey Stoll) wants to become the President of the United States of America, things begin to spiral out of control almost for everyone involved in the season 6 finale. Chuck (Paul Giamatti) believes that his cause is truly just, so he comes after the enigmatic billionaire with everything he has, even though he doesn’t have the power he once wielded as the Attorney General. After learning about Prince’s presidential aspirations, Rian tells her colleagues that she slept with Prince, which immediately prompts a high-level attempt at Michael Prince Capital to hush her up. Here is everything you need to know about the ending of the sixth season finale. SPOILERS AHEAD.

The episode, titled ‘Cold Storage,’ begins as Chuck and Prince face off against each other at the Attorney General’s office. Their respective lawyers, Kate and Ari, are there as well. Acting Attorney General Dave warns them that they should take the meeting seriously as either of them can potentially end up in prison. The episode then shifts to 72 hours earlier. Chuck pays Kate a visit and tells her that he knows that she once got a family friend out of trouble by choosing not to prosecute them. Chuck is clearly on the warpath. His friends and former subordinates worry about him, but none can ultimately do anything about it. 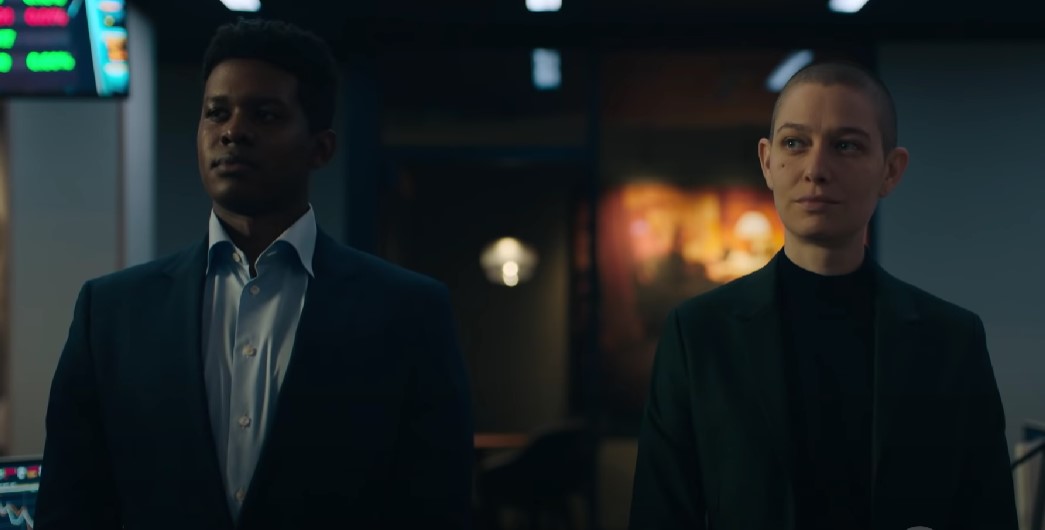 Chuck learns that Mike Prince has kept an armored vehicle company he originally acquired while paying off Axe. Chuck follows the trail and finds out that the vehicles are moving several computer drives. He deduces that these drives contain cryptocurrency with which Mike intends to pay for Mike Money, Prince’s initiative to combat income inequality. While describing Mike Prince, Chuck once more draws the comparison between Prince and Greg Stillson, the corrupt and powerful politician from Stephen King’s novel ‘The Dead Zone’ and its adaptations. Stillson wants to become the President of the United States. Like Prince, Stillson has a voracious appetite and will not stop until he gets what he wants.

After discovering that Rian slept with Prince, Scooter and Wags try to figure out what will be the ramification. We later learn that Mike knew what his office’s response would be. Rian repeatedly asserts that the encounter was completely consensual. Ultimately, she refuses to take the money. As Taylor later tells her, this rejection has allowed her to keep her freedom.

Billions Season 6 Finale Ending: Is There Cryptocurrency in the Drives Retrieved from Mike Prince’s Warehouses?

After being removed from public office, Chuck doesn’t have the authority to conduct a raid, but the drives are too big of a mystery for him to ignore. With Karl Allerd’s help, he gets into one of the warehouses where a drive is kept and successfully brings it out. He contacts an IT expert, who reveals to Chuck that they have only ten attempts to open the drive. If the drive isn’t open by the tenth attempt, it will permanently shut down. The IT expert manages to open that one, effectively taking away over a hundred million in cryptocurrency from Prince.

With one of the drives carrying so much money in it, Chuck thinks that the others do the same as well. However, the way he gathered the initial information was not legal. Because of this, he faces possible jail time. Meanwhile, Prince gets accused of tax fraud.

Prince keeps stating that there is nothing in those drives, but as revealed toward the end of the episode, he has been lying. They indeed carry cryptocurrency of $3.5 billion worth. When he faces potential jail time, Prince decides to sacrifice all of the money at the altar of his ambition. He lets the IT expert exhaust all ten attempts, and the money is lost forever. As Chuck is unable to prove that Mike has committed tax fraud, he gets arrested for using a dummy warrant and gaining evidence under false pretenses.

Will Chuck Ever Get Released? What Is Dave Planning?

If Mike thinks that the conflict between him and Chuck is over, he is grossly mistaken. In the final sequence of the season, Dave visits her former boss in prison and reveals that she got a court order that legitimized his raid. She has seen Mike as he was leaving her office and knows that he did indeed lose $3.5 billion. For the first time since she has started working for Chuck, she understands why he has been so fiercely fighting Prince. The man nearly bought the Presidential election with cryptocurrency. She can’t even comprehend what he will do if he is allowed to become the President.

For now, Chuck will probably stay in jail even though he has no longer any legal needs to. He and Dave will likely prepare for Prince’s next move toward the White House. Although 2028 is still quite far away, Presidential campaigns are not built in one day. But when Prince does make that move, Chuck and Dave will be ready.