Who is Brandon Chappell? Does Joe Exotic Have a Secret Wife?

Netflix’s ‘Tiger King’ lays bare the life of Joe Exotic, the eccentric big cat owner who’s captured everybody’s fancy. However, there are still aspects of the gun-toting, polygamous, openly gay man’s life that can take one by surprise. For example, Netflix’s docuseries makes no mention of the fact that Joe has a son. We know that he’s been married to, and has had relationships with several men. However, who were the women in Joe’s life before he decided on his sexuality? Naturally, you might be curious to know about Joe’s son and the woman who mothered him. We have got you covered right here.

Brandon Chappell’s identity came as a surprise to everyone. Although he appears in some scenes in the docuseries, he’s never mentioned by name or introduced — and therefore, remains unidentifable. Currently, Brandon is 38 years old and has three children of his own.

Although Brandon’s not mentioned in ‘Tiger King’, Joe never kept the existence of his son a secret. Rick Kirkham revealed to The Sun that Joe’s son came to work at the zoo, the very first summer Rick was there. He further stated, “Joe treated his son worse than he treated the other employees. He expected more out of him; he expected him to take more leadership and do harder work. He had his son sweeping the park instead of giving him a decent job, feeding the animals, or something like that.”

Rick has also implied that Joe might have regretted having a son or being married in the first place. Chealsi Putnam, Joe’s niece, also spoke about his relationship with Brandon, saying, “Joe was in and out of Brandon’s life when he was growing up, at one point just a few years ago Brandon and his then-wife, both worked at the zoo with Joe.”

However, Chappell and his wife moved back to Texas after having a falling out with Joe. Their relationship went south when Joe asked Brandon’s wife to tweak some books and change some accounts. Feeling that the entire operation was getting shady, Brandon departed with his wife.

Did Joe Exotic Have a Secret Wife? 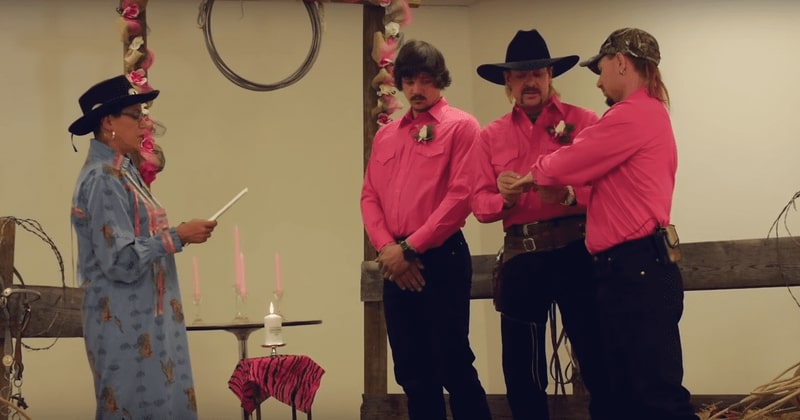 Joe had Brandon in the 1980s, with Kim, his then-girlfriend. She’s not mentioned in ‘Tiger King’ either. When Joe became a father, he was working as the chief of police in a small town in Texas called Eastvale. He lived with Kim, in the town that reportedly had a population of 503 people. All the while he was with Kim, Exotic was also exploring the gay scene at night, in Dallas. It is no secret that Joe has had struggles with his sexuality in the early years. ‘Tiger King’ briefly tells us as much. However, the fact that he was a father was left out of the series.

Currently, it appears that Joe does not have a good relationship with Brandon, and very little is known about Kim’s present whereabouts. We know that Joe went on to embrace an openly gay lifestyle, marrying both Travis Maldonado and John Finlay. They had a unique three-way wedding ceremony in 2014. While John became estranged, Travis met a tragic demise in a shooting accident. Two months after Travis passed away, Joe met and married Dillon Passage. As of 2019, the two are still listed as a legally married couple.