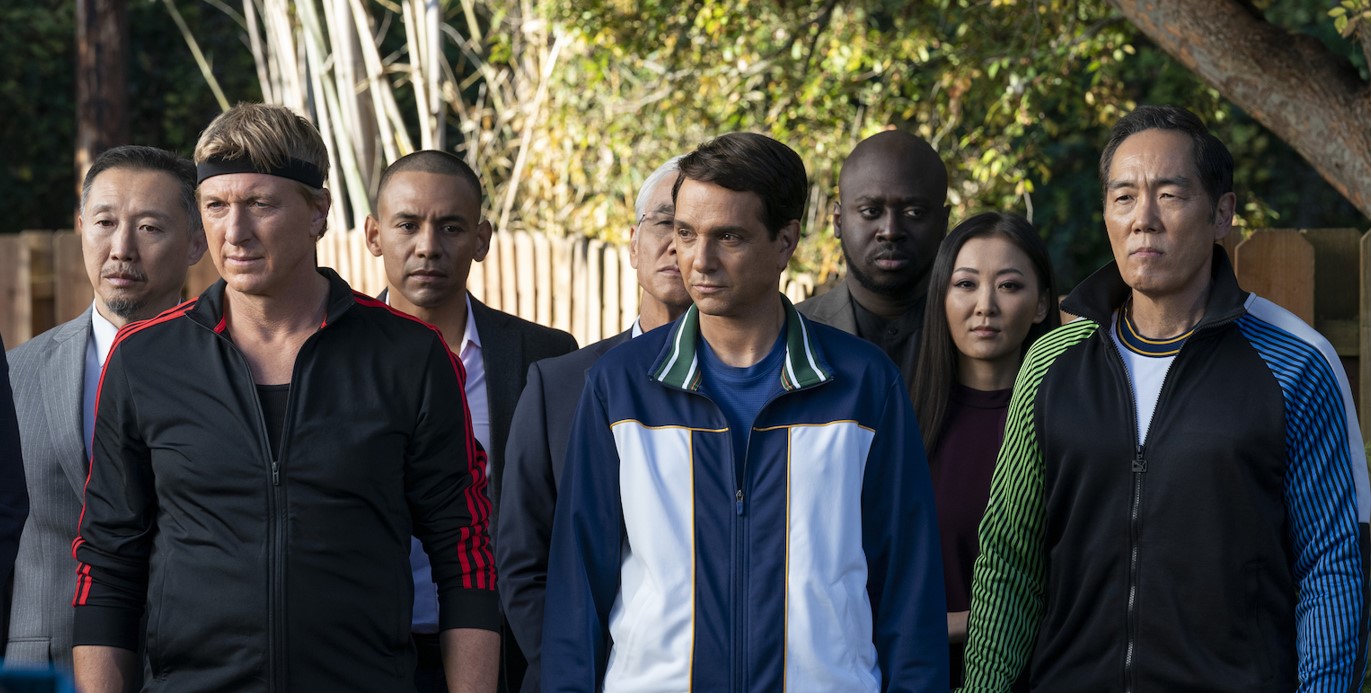 When ‘The Karate Kid’ came out in 1984, no one knew that it would become one of the most iconic underdog stories of all time and inspire generations of young moviegoers. Three moderately successful sequels followed, and by 1994, it seemed that the world was done with the ‘Karate Kid’ franchise. In 2010, a remake of the original film was released with a similar story but different characters. Eight more years passed when we thought the franchise was gone forever, But in 2018, it returned with a bang with the release of ‘Cobra Kai.’ Set 34 years after Daniel LaRusso (Ralph Macchio) defeated Johnny Lawrence (William Zabka) in the 1984 All-Valley Karate Tournament, ‘Cobra Kai’ flips the narrative and tells the story from Johnny’s perspective.

As a show, Netflix’s ‘Cobra Kai’ is steeped in nostalgia and love for 1980s cinema. In season 5, Daniel and Johnny team up with Chozen Toguchi (Yuji Okumoto) to take on Cobra Kai, which is more powerful than ever under Terry Silver’s (Thomas Ian Griffith) administration. Meanwhile, stuck in prison, John Creese (Martin Kove) seethes and schemes. Here is everything you need to know about the ending of ‘Cobra Kai’ season 5. SPOILERS AHEAD.

When the season begins, things are pretty bad for Daniel and Miyagi-Do. Although Hawk won in the boys’ category at the 51st All-Valley Karate Tournament, Tory won in the girls’ competitions, and Cobra Kai was declared the overall winner because they had more accumulated points. The agreement was that the loser would shut down their dojos. But that indomitable spirit within Daniel refused to give up, and he reached out for help.

Meanwhile, it seems that Johnny has given up on Eagle Fang Karate. Toward the end of the previous season (Xolo Maridueña) leaves for Mexico in search of his biological father, and Johnny and Robby (Tanner Buchanan) follow him. Miguel eventually meets the man he was looking for, Hector Salazar, who turns out to be every bit of a dubious character Carmen told Miguel he was. As a heartbroken Miguel prepares to go back to the US without telling Hector who he really is, he discovers that Johnny has come to take him back. Johnny may not be perfect, but, as Miguel realizes, he is the one man who wants to be in his life.

Johnny even ends up solving the longstanding feud between Miguel and Robby. After a conversation with Daniel, he lets the two boys fight it out, and it nearly proves to be a disaster. But Miguel pulls himself back right when he is about to do to Robby what the latter did to him during the school fight. And a bond starts to form between the two erstwhile enemies, and it only becomes stronger after it is revealed that Carmen is pregnant.

Elsewhere in Los Angeles, Daniel realizes he is thoroughly outmatched against Silver. After learning about Silver‘s expansion plans, Chozen infiltrates Cobra Kai as a prospective sensei but is soon found out. Daniel comes to believe that Silver must have reached out to Mike Barnes (Sean Kanan), the prodigious martial artist from ‘The Karate Kid Part III’ (1989). Although Barnes is still the brutal and impressive fighter he used to be, age has tempered him, just like Chozen. He owns a furniture shop, and unlike what Daniel believes, he has little love for Silver and has nothing to do with his schemes. However, because Daniel seeks Barnes out, it puts the latter on the crosshair of Silver, who burns his furniture shop down.

During the confrontation with Chozen, Silver discovers how inept the local karate teachers are, so he reaches out to Kim Da-Eun, the daughter of his and Kreese’s former Tang Soo Do master, Kim Sun-Yung. She arrives in Los Angeles with her own pool of martial art instructors, turning Cobra Kai into an even more brutal and demanding institution.

In the season finale, a confrontation inevitably happens with Silver on one side and Daniel, Johnny, and Chozen on the other. Barnes joins the fight and plays a critical role. More importantly, most members of the new generation of fighters mend things between themselves, including Tory (Peyton List) and Sam (Mary Mouser).

Unlike the previous season, where the finale depicts a karate competition, the 51st All-Valley Karate Tournament to be exact, season 5 sets things up for the future. In this regard, it is similar to the third season, where the plot of the ALL-Valley Tournament is set up after Daniel and Johnny confront Kreese. By the start of the fifth season, Kreese is in jail and seemingly out of the picture. But even with the absence of both him and Johnny, Cobra Kai reaches unprecedented heights under the new management.

However, despite the success, not everything is perfect in the Cobra Kai franchise. After learning that Silver paid off the referee of her match with Sam, Tory has become increasingly disillusioned. That only increases after  Kim Da-Eun and her instructors join the sprawling dojo chain. Tory forms a sisterly bond with Devon Lee, the debate team member that Eagle Fang recruited in season 4, and tries to protect the younger girl from the brutal methods of teaching at the new Cobra Kai. Seeking guidance and help, she reaches out to Kreese in prison. Kreese uses a scheme that leads to Daniel getting hurt. Horrified, Tory stops visiting her former sensei, and she and Sam eventually become friends.

Daniel and Johnny trick Kreese into revealing that Silver intends to enter Cobra Kai in Sekai Taikai, an international but little-known karate tournament, and secure places for both Miyagi-Do and Eagle Fang. As the adults celebrate, the younger generation decides to break into Cobra Kai headquarters to find incriminating evidence against Silver. Meanwhile, Daniel is confronted by Barnes, who accuses the other man of ruining his life. When Daniel reveals that Silver was behind it, Barnes leaves with Johnny and Chozen to fight Silver at his own home, much to Daniel’s dismay.

Although the other three leave Daniel behind, Stingray comes to pick him up and says that he will testify against Silver. Chozen gets seriously hurt during his encounter with Silver but survives. Johnny and Barnes take care of the instructors that Kim Da-Eun brought with her.

What Is Cobra Kai without an all-out chaotic brawl? This one takes place between students of Cobra Kai and students of Miyago-Do and Eagle Fang as Sam, Tory, Hawk, Miguel, Robby, and the rest try to secure video evidence against Silver. Mitch reveals himself as a Cobra Kai mole, and Devon later joins Tory in her fight against Kim Da-Eun.

The final fight of the season is, of course, between Daniel and Silver, which has been brewing for 28 years. Earlier in the season, Silver beats Daniel up pretty badly. But this time, Daniel triumphs. After that and after watching the video clip where Silver confesses to Tory that he had paid off the referee, Cobra Kai students quit in droves. And Silver is arrested for assaulting Stingray. It’s as complete a victory as Daniel and Johnny can hope for, but as the audience learns, it might not be all over for Cobra Kai.

Does Kreese Escape from Jail? Where Is He Heading?

As the season ends, Daniel and Johnny are told by a police detective that Kreese has been killed by a fellow inmate. This later turns out to be incorrect. After exhausting almost all other options of getting out, Kreese orchestrates an incident where he appears to be stabbed by one of his lackeys. He later renders his guards unconscious, takes clothes from his doctor, and escapes. As long as he is out there, the terrible legacy of Cobra Kai will continue.  It’s a great thing that the series creators have kept Kreese on the villainous side while adding immense complexity to the character by exploring his backstory.

Although Cobra Kai is at its lowest since Johnny brought it back, it still is eligible to contend in Sekai Taikai. In the prospective season 6, Kreese will likely find some students to compete in the international karate tournament. He might even receive help from Kim Da-Eun, who, if flashback scenes are to be believed, was closer to him than Silver when they were all younger.