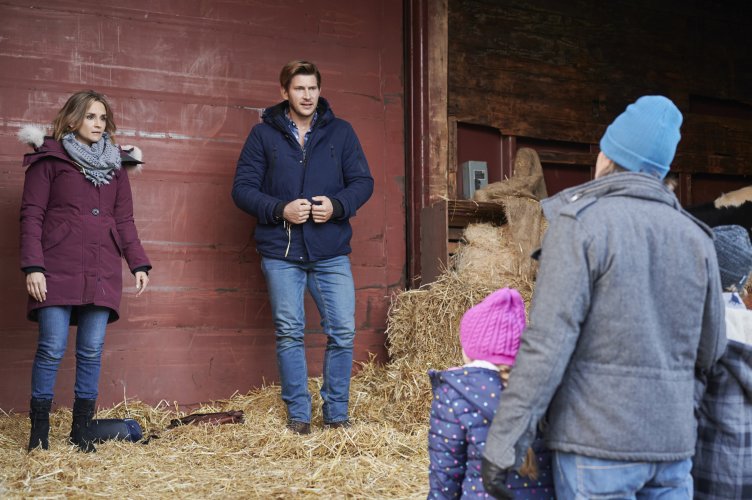 Hallmark Channel’s ‘Cross Country Christmas’ is a feel-good romantic Christmas movie, which is a part of the network’s annual ‘Countdown to Christmas’ event. The 2020 film follows the adventures of Lina and Max – Rachael Leigh Cook and Greyston Holt, respectively – as they journey across the country to be with their families during Christmas. Despite hailing from the same locality, Lina and Max have never been friends. Through their journey, dotted with several obstacles, the two find “a little bit of extra love.”

The story begins with the two protagonists traveling home for Christmas when a storm reroutes their plane, and they are stranded at the airport. The storm also halts all other modes of transportation. Desperate to reach their families on time for Christmas, Lina and Max partner up and embark on a rather exciting trip together. The two meet new people and see new places on their way home, which provides them with different perspectives of Christmas and each other. Let’s find out where it was filmed.

As far as the filming location is concerned, this Hallmark movie is no different from a majority of other Hallmark movies. The film was shot entirely in Canada, with a predominant portion of the film featuring locations from British Columbia. The picturesque landscape of the westernmost province of the country provided the most appropriate frameworks for the movie that takes place mostly on the road. The film has been directed by Catherine Cyan and written by Kirsten Hansen. Here are the precise locations where ‘Cross Country Christmas’ was shot.

A major portion of ‘Cross Country Christmas’ was shot in Langley, B.C., where the crew took over a barn to shoot certain scenes. The shooting began on October 5, 2020, and ended on October 26, 2020. The film’s production partner Showmax Events, teamed up with the film’s cinematographer and the camera crew to create a mobile virtual set. The collaboration is said to have allowed the film to be shot without the use of green screens.

Showmax is reportedly Canada’s only supplier of Roe Visual BP2.8mm LED Wall, which was used in the film to shoot PMP day and night interiors with multiple vehicles. The actors were able to experience “real” Christmas roads due to the virtually created environment by the brilliant camera crew.

Langley is a popular filming location and has been featured in shows like ‘The Vampire Diaries’ and ‘Riverdale’. The picture below is of Rachael Leigh Cook and Greyston Holt taken during the shooting of the film.

The airport scene in the film was supposedly shot in the Boundary Bay Airport, also known as Vancouver Bay Airport. The location is 15.7 km southeast of Vancouver and is known to have hosted films like ‘Deadpool’ and ‘Fifty Shades of Grey’ and popular shows like ‘Legends of Tomorrow’ and ‘Arrow’. Several scenes were also shot at Vancouver International Airport (YVR) in Richmond, located 12 km from Downtown Vancouver.

Rachael Leigh Cook and Greyston Holt essay the lead characters – Lina and Max – in the film. Avid film lovers will associate Cook with holiday season nostalgia from the 90s owing to her roles in films like ‘She’s All That’ and ‘The Baby-Sitters Club.’ Among her other notable works are ‘Love Guaranteed’ and ‘Criminal Minds’ (Maxine Brenner).

Greyston Holt is known for his role as Zane in ‘A Very Country Christmas’ and as Ray Prager Jr in the Canadian television series ‘Durham County.’ Apart from that, he is also recognized for his role of Clayton Danvers in ‘Bitten.’ Other members of the cast for ‘Cross Country Christmas’ include Jon Cor as Daryl, Keith MacKenzie as Harvey, Emma Oliver as Sarah Hunter, Nils Hognestad as Curtis, and Robyn Bradley as Klara.