Day Shift Ending, Explained: Does Bud Save His Family? 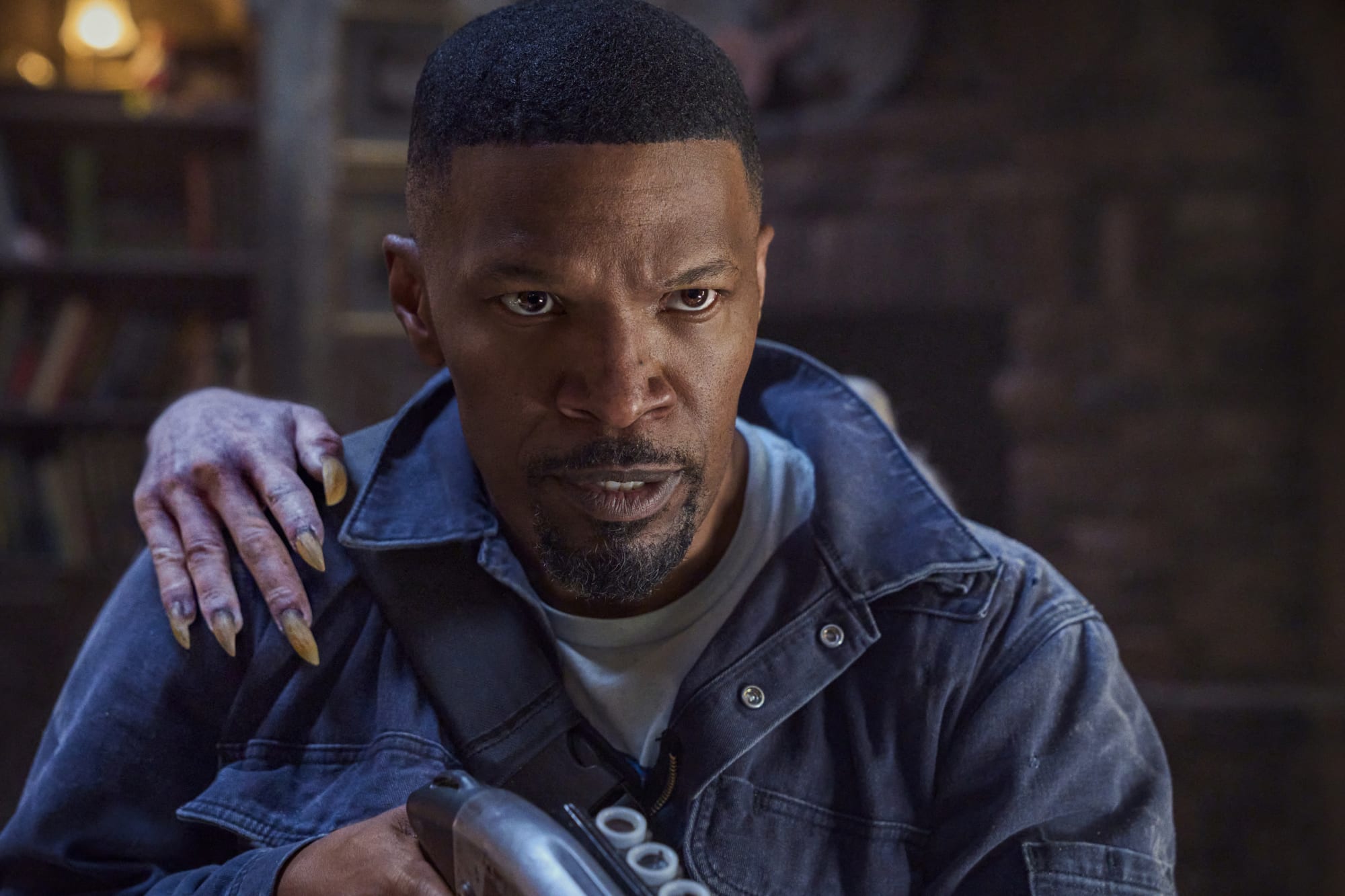 J. J. Perry, the director of Netflix’s ‘Day Shift,’ is a well-known second-unit director and stunt personality in Hollywood, having worked on projects such as several ‘John Wick’ films, several ‘Fast and Furious‘ films, and ‘Shadow and Bone‘ TV series. ‘Day Shift’ marks his debut as a director. Set in the San Fernando Valley, the plot revolves around Bud Jablonski (Jamie Foxx). The world, including his estranged wife and daughter, thinks he runs a pool-cleaning business. In reality, he is one of the most accomplished vampire hunters in California. When his former wife Jocelyn (Meagan Good) announces that she wants to move to Florida to deal with the rising expenses, Bud convinces her to give him a few days to gather the money they need for their daughter Paige’s school fees and braces. Meanwhile, an ancient and powerful vampire, Audrey (Karla Souza), discovers that Bud has killed her daughter and decides to make him pay for it. Here is everything you need to know about the ending of ‘Day Shift.’ SPOILERS AHEAD.

At first glance, Bud might appear like any other blue-collar father in a mega city like Los Angeles. He struggles to make ends meet at a place where the cost of living seems to be out of reach for an ordinary man. While the problems of an ordinary man exist in Bud’s life, he is far from being ordinary. Bud is a vampire hunter and an exceptional one at that. As mentioned above, neither Jocelyn nor Paige knows about this. Both think that he owns a pool-cleaning business.

The world-building of ‘Day Shift’ is surprisingly layered, even though it’s not an original script. The main conflict is between two groups — the vampires and the vampire hunter union. At the start of the film, Bud doesn’t belong to the union. He used to be part of it, but his actions, reckless attitude, and general disregard for the rules and codes of the organization seemingly led to his ouster.

In ‘Day Shift,’ there are five types of vampires: Southern, Eastern, Spider, Uber, and Juvenile. Vampires are generally solitary, but when they are in a group, a clear hierarchy forms based on age. Vampires can’t reproduce; they increase their numbers by turning humans. Vampires have familiars; the more powerful vampires have stronger familiars. The only thing vampires in ‘Day Shift’ are scared of is the sunlight, though they have begun using sunscreen, which allows them to be under the Sun for a short period. Wood is poisonous to them, and weapons made out of silver are fatal. Garlic is also dangerous for vampires.

After killing two vampires, including one that looks like an elderly woman, and extracting their fangs, Bud learns about Jocelyn’s decision. Desperately needing money, he visits Troy in the hopes of selling the fangs. However, as Troy’s offer is too low, Bud asks his longtime friend and legendary hunter Big John Elliott (Snoop Dogg) to help him rejoin the union. Ralph Seegar, the current head of the Los Angeles branch of the union, reluctantly lets Bud in but warns him that if he violates even one of the union codes, he will be suspended for good. Moreover, Seegar instructs Seth (Dave Franco), an office clerk who has never done field work before, to accompany Bud on every mission. When Seth voices his reservations, Seegar promises that Seth will be promoted if he ensuBud’sud’s ouster.

Meanwhile, something is happening in the vampire community of Los Angeles, and not every bit of it is made clear in this film. Audrey reveals that in the time of the Aztecs, the vampires were worshipped as gods and offered blood sacrifices. Her main objective is to return to that world order. The elderly vampire that Bud kills at the start of the film is revealed toAudrey’sey’s daughter. When she discovers what has happened, Audrey embarks on a path of vengeance. She tortures Troy and learns about Bud before killing the former.

Day Shift Ending: Does Bud Save His Family?

Yes, Bud saves his family. In the course of the film, we learn the war between the vampires and the union is being waged all over the world. We meet at least three vampire hunters besides Bud and Seth in the film. The Nazarian brothers (Steve Howey and Scott Adkins) help Bud clear up a vampire nest, whereas Big John plays a pivotal role in Bud getting his family back. He seemingly sacrifices himself while fighting a groupAudrey’sey’s underlings, though it is revealed that he is alive at the end of the film, implying that he is a vampire as well.

Audrey is an Uber vampire. Decapitation and fire are two of the most effective ways to kill vampires, though hunters are reluctant to use the latter as it destroys the fangs. Moreover, simple decapitation doesn’t work on Uber Vampires. A hunter must first pierce an UVampire’sre’s heart with wood before decapitating them with silver. That’s what happens with Audrey. Initially, Bud proves to be no match for Audrey. But then, Jocelyn impales Audrey with a wooden stick through the back. Bud then tricks Audrey into rushing at him and decapitates her head using his silver-plated wire.

With the number of fangs Bud has gotten during this entire ordeal, Jocelyn and Paige can stay in Los Angeles. Although he and Jocedon’ton’t immediately reconcile, there is hope for the future. Bud promises that he will be truthful to Jocelyn from this point forward.

What Does Audrey Want?

As mentioned above, Audrey is an Uber Vampire. She pretends to be a high-end realtor and is buying up properties in the Valley so she can relocate vampires among humans. She intends to rule over all the vampires in Los Angeles within a year, usurping the mysterious 700-year-old vampire known as El Jefe from his position. She sends Heather (Natasha Liu Bordizzo), a vampire she turned, to keep an eye on Bud. However, Heather defects and joins Bud and Seth in their attempt to resBud’sud’s family.

Audrey came to the US before her daughter. When she finally went back, her daughter was considerably old. This is why she looks much older than her mother. Audrey’s original intention has been to create a vampiric utopia for her daughter. She knows that there will be conflicts with other vampires, including El Jefe. That’s why we see vampire-killing bullets in her storage. She has been ready for every possible scenario, but her desire for vengeance ultimately proves her undoing.

Seth is turned into a vampire, likely by Audrey. As Audrey is an Uber vampire, Seth becomes one as well. This is why he survives even after Bud decapitates him. Initially, he is very unpredictable and even tries to attack involuntarily. But he quickly gains control over himself and participates in the night shift attack against Audrey and her underlings. While Bud fights Audrey, Seth and Heather take on Klaus, Audrey’s right-hand vampire. They eventually rip Klaus’ hands out, and then Seth proceeds to kill him. Afterward, he helps Bud deal with Seegar. When Seegar warns Seth that he will not get the promotion he wanted, Seth declares that he now prefers to work in the field. Given the recent developments, that’s likely the best option for everyone.

Read More: Is Day Shift Based on a Book?