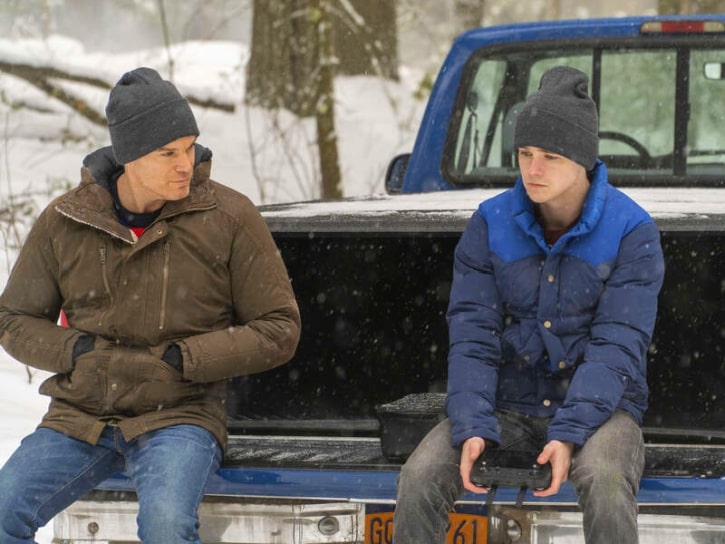 In its penultimate episode, titled ‘The Family Business,’ Dexter (Michael C. Hall) tells Harrison the truth. He speaks about his Dark Passenger, what Harry taught him, and the code but initially stops before revealing what he actually does to his victims. It brings him and Harrison closer than ever before. Meanwhile, Kurt (Clancy Brown) seeks vengeance for his son’s death, and Angela makes the connection between Jim Lindsay and the Bay Harbor Butcher. Here is everything you need to know about the ending of ‘Dexter: New Blood’ episode 9. SPOILERS AHEAD.

The episode begins as Dexter speaks to his son about the fact that they both were born in blood, the Dark Passenger they seem to share, and Harry’s code but refrains from admitting that he kills the criminals and murderers that slip through the crack of the justice system. Instead, he initially tells Harrison that he scared them in such a way that they stopped committing crimes.

It’s Christmas. The father and the son exchange gifts. It is probably the first proper Christmas that Harrison has since leaving Argentina. Among the gifts he receives from Dexter is a hunting rifle. In turn, Harrison gives his father a portrait of Deb. They later visit Angela and Audrey to exchange gifts. Much to Dexter’s surprise, he discovers that Kurt hasn’t skipped town when the other man shows up at Angela’s doorsteps to wish her for Christmas.

In the course of this episode, Angela confirms that Dexter is indeed the Bay Harbor Butcher. Meanwhile, dressed in his serial killer outfit, Kurt sets fire to Dexter’s cabin, hoping to flush his son’s killer and Harrison out so he can kill them. Unbeknownst to him, Dexter and Harrison have found the bunker where he keeps his trophies.

Immediately after Dexter nearly runs him over, Kurt seems to vanish in thin air towards the end of the previous episode. In episode 9, Dexter and Harrison go looking for him with the drone that, ironically, Kurt gifted Harrison. By now, Harrison knows that Kurt is a serial killer who has been murdering young women for several years. They find the bunker, intentionally triggering the alarm so that Kurt will know that they are there and making their faces visible to the camera.

As they step into the bunker, Kurt’s modus operandi is finally revealed. We saw in a previous episode that Kurt drains blood from the bodies of his dead victims. We learn the reason for it in this episode. He preserves his victims’ bodies in a twisted and psychotic attempt to maintain their innocence. Dexter and Harrison find Molly among the dead victims. In episode 7, Kurt is shown watching her from afar. Evidently, he captured her and killed her before turning her into one of his trophies.

Yes, Kurt is dead as well. Dexter finally confesses to his son about what he truly is and reveals that he killed the Trinity Killer. Throughout this episode, Dexter is compared to Batman, and that’s another instance of the subtle irony and humor that run throughout both the original series and the revival. Batman famously has a code of not killing anyone, while the first rule of Dexter’s code basically revolves around how to get away with murder.

After finding out that Dexter and Harrison are in his bunker, Kurt goes back to his home in the town, packs some clothes and money, and tries to leave, as Dexter thought he would. He and Harrison ambush Kurt at his home and Dexter injects him with ketamine. When Kurt wakes up on a dissecting table surrounded by his victims, Harrison is there with Dexter. All his life, Dexter has been alone. Although his conscience, appearing as Debra, screams at him not to do this, Dexter kills Kurt in front of his son to let him know that the latter will never be alone that there is a way to channel their Dark Passengers.

Seeing that Dexter and Harrison’s cabin has been burned down, Audrey invites them to her home, much to the dismay of Angela, who has already figured out that there is a considerable chance that Dexter is the Bay Harbor Butcher. When they get home, she finds an envelope in her letterbox. Inside it, there is a note stating that Jim killed Matt Caldwell. There is also a titanium screw inside the package. As we know, Kurt recovered two screws from Matt’s ashes in the incinerator. He sent one of the screws to Dexter. This is the other one.

We can safely presume that Kurt himself or someone else he paid left the envelope. Kurt probably did it after discovering that Dexter and Harrison had found his bunker. Angela didn’t see it in the morning because she probably rushed out of her home after finding out that Dexter’s cabin had burned down. If Kurt hired someone else to deliver the envelope, it’s possible that they left it in Angela’s letterbox after she went out of the house. With Kurt gone, the finale will most likely revolve around the conflict between Angela and Dexter.

Who Is Wiggles the Clown?

Wiggles is a child killer that appears in episode 9. He is part of Dexter’s past and is featured in the flashback scenes as Dexter explains who he is to Harrison. Interestingly, in all the scenes involving Wiggles, the aspect ratio is similar to the original series. He at least killed twelve children before Dexter found him and ended his murderous spree. While Wiggles never appeared in ‘Dexter,’ there is a killer clown and pedophile named Puffalump (real name Steve Valentine) in Jeff Lindsay’ novel ‘Double Dexter,’