Does Angelina Die in Manifest Season 4?

Netflix’s ‘Manifest’ follows the story of the passengers of Flight 828, who try to solve the mystery of their five and a half years long disappearance. Over the seasons, they find out several surprising things about their connection with each other, as well as the power that the Callings give them. In the first part of its fourth season, the show starts to give some answers, but the revelations only confirm that things are going to get very bad before they get better. From the looks of it, the only thing standing in the way of a good ending is Angelina.

There are a few times when Angelina comes close to dying, and because of her condemnable actions, we get hopeful every time. Angelina’s death would solve many problems for the Stones and the rest of the world. But is her death in cards just yet? Does Angelina die? Here’s what you should know about her.

When Angelina is introduced to the audience, she is an innocent person in desperate need of help. Due to her visions, following her voyage in Flight 828, they believe that she has been possessed by something evil. Because they are deeply religious, they believe that their daughter should be kept in chains, lest she goes about doing the devil’s work. While they are the real villains in this situation, eventually things turn out to be so that their initial instincts are proven right. Their daughter does become someone evil who, when let loose on the world, will destroy it. 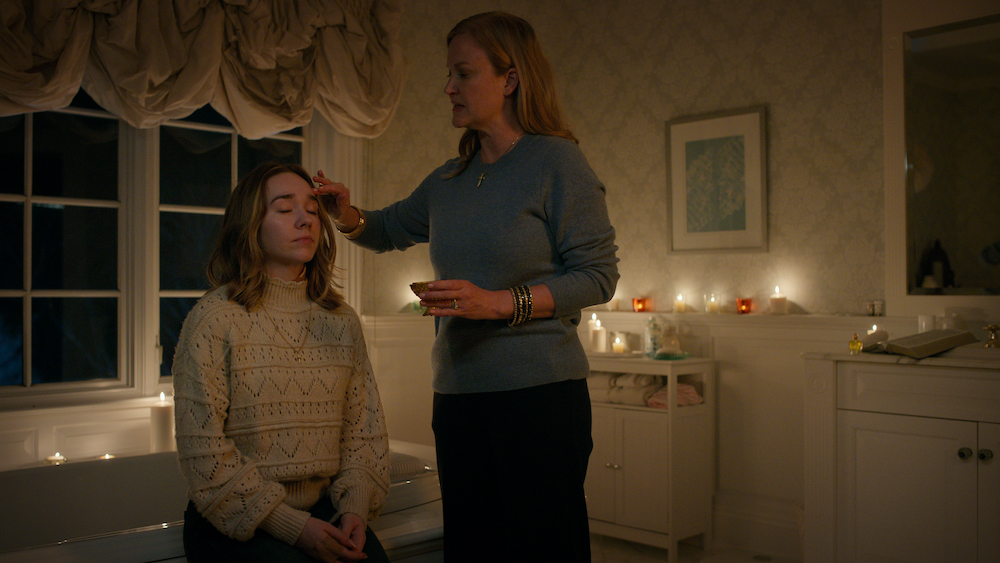 By the end of Season 4 Part 1, Angelina shows her true colors, as well as the lengths she will go to do what she wants. She is a religious fanatic who uses the Bible’s words, manipulating them to suit her understanding of the situation and justify all the bad things that she has done. Believing that Eden is her guardian angel, she kidnaps the baby and kills Grace. For two years, she keeps the Stone family in torment about Eden’s fate, and when they finally find her, she makes it clear that she is never going to stop.

Things get even worse when Angelina gets hold of the Omega Sapphire. It gives her the power to conjure new callings. When the others realize that she is in possession of the one thing that can make or break the future of the world, they try to stop her. In the process, the sapphire is broken and only a shard of it remains. Angelina tries to take it but it slips into the pool of lava created after she used the sapphire. In trying to catch the shard, she slips her hand into the lava, and something very interesting happens.

The heat from the lava burns Angelina’s hand but because she is holding the shard, the sapphire keeps her hand from being burnt to a crisp. In fact, it lodges itself into her palm so that the sapphire shard is now a part of Angelina’s body. Knowing that the power to control the world lies in her hand, Angelina walks away with streaks of lava flowing out into the world and kickstarting the end of the world. So, for now, she is far from dead. Rather, she is the most powerful person in the world right now.

While the sapphire gives her the power that saved her life, it also paves the way for her eventual downfall. While Ben and Michaela are busy fighting Angelina, Oliver and TJ figure out that should Cal, the Dragon, touch the sapphire, he might get the power to save the world. Unbeknownst to everyone, Cal and Angelina have a skirmish in a calling where Cal all but destroys the sapphire. However, a part of it remains, which is now a part of Angelina’s hand.

The Stones know that the sapphire is the only way to save the world and they will do whatever it takes to find it. It is certain that they will eventually get it, no matter how many losses they face along the way, which means that Angelina will have to part from it one way or another. With the sapphire in her possession, she is alive. But will the same remain true if she is parted from it? It is possible that removing the sapphire from her hand might kill her. It would have been sad to see her die had she shown even a hint of a promise of redemption. But it is clear that she will never change, and the Stones know it. Under different circumstances, they might have tried to save her, but with all that she has done to their family, they wouldn’t be too bothered if she dies, and neither will the audience. Considering all this, it is fair to assume that death is on the cards for Angelina.