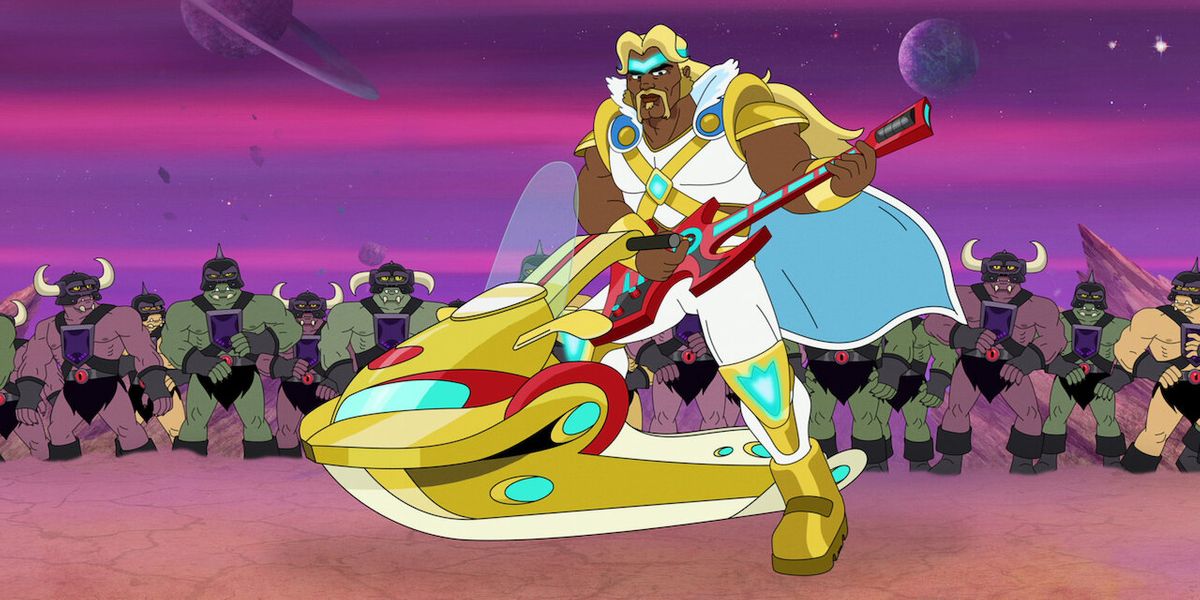 ‘Farzar’ is an adult animated comedy series created by Roger Black and Waco O’Guin. The series revolves around the mild-mannered but good-hearted Prince Fichael, son of the Czar of Farzar, Renzo. The father and son face several conflicts while dealing with the threat of the evil alien Bazarack, attempting to throw over Renzo.

The sci-fi series pays homage to several classic films and shows of the 80s while crafting a fresh narrative of good vs. evil. Ultimately, Fichael and Renzo’s opposing ideologies lead Farzar to a cataclysmic fate. If you are wondering about the fate of the planet and its quirky residents, here is everything you need to know about the ending of ‘Farzar’ season 1! SPOILERS AHEAD!

‘Farzar’ opens with Prince Fichael turning thirty. He is the son of the egoistical human Renzo, who liberated the planet from aliens and formed a human city inside a dome. Renzo then married Flammy, an older woman whose family background made him the Czar of Farzar. Since establishing the Dome City, Renzo has been at odds with the evil alien Emperor Bazarack. On his 30th birthday, Fichael asks his father to make him a General in his Army. Knowing that Fichael is incompetent, Renzo makes him a false General and gives him a team of losers known as the SHAT Squad. 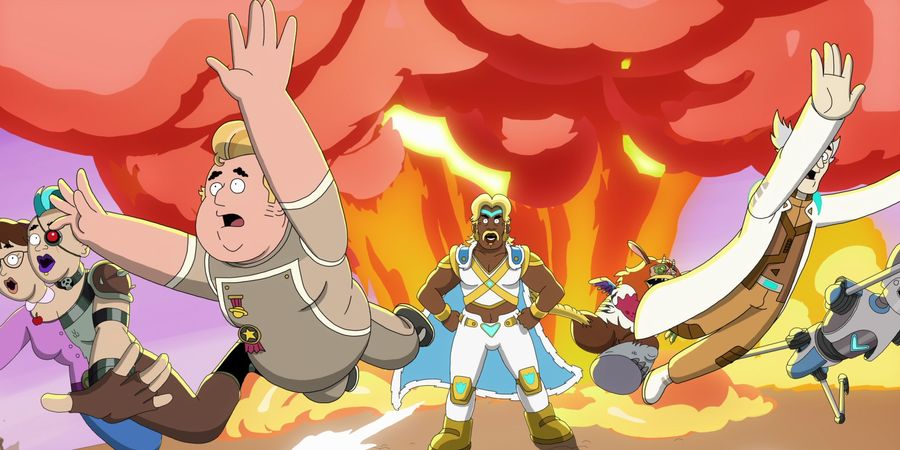 The team comprises cyborg soldier Scottie, the conjoined twins Val and Mal, a paranoid scientist Barry, a mutant creature Billy, and the alien pet Zobo. However, Fichael quickly realizes that his father has tricked him. Hence, to earn his father’s respect, Fichael sets out with his team on a mission to defeat the feared Bazarack. After meeting Bazarack, Fichael realizes that his father is at the root of the issues faced by their planet, which is divided between humans and aliens.

Bazarack befriends Fichael and tries to use him to defeat Renzo. However, Fichael refuses to turn on his father and decides to mend Renzo’s ways and bring peace to the planet. Fichael’s quest is often foiled by his own incompetents, the antics of his team members, Renzo’s ego, and Bazarack’s misguided plans to throw over the king. Ultimately, Bazarack decides to launch one final attack on Dome City and defeat Renzo once and for all.

In the season 1 finale, titled ‘War and Peace,’ Bazarack is shaken by the death of his right-hand man, Clitaris, who dies in a conflict with Flammy. Bazarack plans on uniting the various alien tribes and leading an attack on Dome City to overthrow Renzo and his rule on the planet. However, the other alien leaders ridicule Bazarack and refuse to aid him in his fight against Renzo. Nonetheless, Bazarack convinces them to help by revealing Clitaris’ tragic death and highlighting Renzo and Flammy’s tyranny over the aliens. 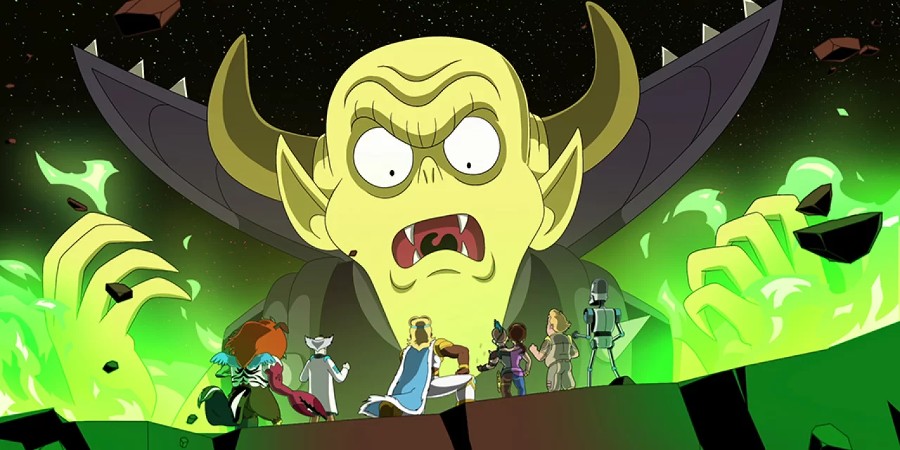 The aliens lay a siege to Dome City, and Renzo prepares to retaliate. However, Fichael convinces his father to give him an opportunity to broker peace. After some struggles, Fichael brings Renzo and Bazarack to an agreement, signing a peace treaty. The war ends, and peace is established in Farzar. Fichael decides to throw a party for the aliens and humans to celebrate the newly formed peace. However, Renzo wishes to use the opportunity to gather all aliens in one place and wipe them out.

Fichael realizes he cannot get his father to mend his ways. Thus, Fichael decides to oppose his father on the battlefield and save the aliens. Renzo and Fichael engage in a mecha battle that takes a drastic turn after Renzo destroys Fichael’s robot. Just as Fichael loses hope and Renzo begins his rampage, Zobo returns from the rehab center and unleashes his chaos-trophe. Zobo’s powers are enhanced by the chaos resulting from Renzo’s rampage, and Fichael defeats his father with the alien’s help.

Ultimately, Zobo’s powers break Renzo’s mecha armor and kill the Czar of Farzar. Fichael embraces his dead father’s body as Bazarack realizes that the king’s death means his victory. While it seems like Renzo is dead, he will likely be revived using Barry’s several scientific experiments. Over the season, Bazarack becomes misguided from his quest to defeat Renzo and receives some motivation after Clitaris’ death.

In the end, Bazarack succeeds, and Clitaris reveals that he faked his death to motivate his leader. However, a dazed Bazarack shoots Clitaris believing him to be a ghost. The war between humans and aliens causes Fichael and Bazarack to lose their loved ones. Therefore, their rage could make them each other’s foes and take the war to the next level.

What Happens to the Dome City?

During the final battle between Zobo and Renzo, the alien overpowers the mecha-powered Czar. Zobo thrives on chaos, and there is plenty of turmoil during the fight. Therefore, it is no surprise that the creature’s powers defeat Renzo. However, the fight causes critical collateral damage that directly affects the future of Dome City. The city is protected by a plasma-powered barrier that prohibits the aliens from invading it. The “dome” surrounding the city is the only thing that stands between the aliens and humans. Therefore, it can be considered a symbol of Renzo’s tyrannical rule. 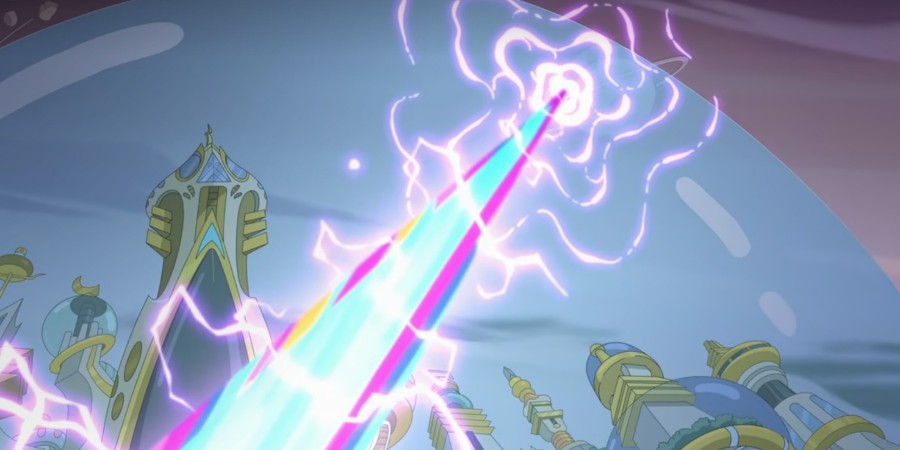 In the final moments, Zobo’s powers destroy the dome protecting the city. The protective shield collapses along with the king that installed it in the first place. Thus, the dome’s destruction symbolizes the end of Renzo’s tyranny on the planet’s aliens. The dome’s collapse also means the city is now vulnerable to alien attacks. However, the aliens only want equal access to the planet’s resources and aren’t against humans. With the city vulnerable and ripe with resources, it could get overrun by the aliens.

Renzo was the Dome City’s strongest warrior, and his presence kept the aliens away from the city. However, with Renzo’s death and the dome’s destruction, nothing is protecting the city from the aliens. Therefore, there is no other way for peace to exist on the planet except for humans to accept the aliens. Fichael will have to struggle to create a harmonious society where humans and aliens can live together peacefully. As a result, the finale sets up an exciting conflict for Fichael to deal with in a potential second season. Whether Fichael can step into his father’s shoes and become the savior of Dome City remains to be seen.