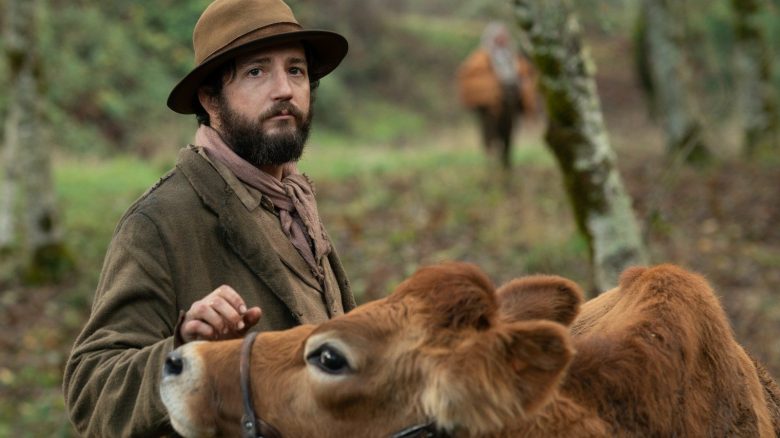 Kelly Reichardt’s movies have been noted for their quaint portrayal of being American and this one is no different. Her latest film, ‘First Cow’ is a buddy movie and explores male friendship subtly, unlike buddy action and buddy comedy movies that depict the theme in a raunchier fashion. The film is an adaptation of the novel, ‘The Half Life’ by Jonathan Raymond.

Many Hollywood movies often try to portray what it means to be American. And these films often depict the American dream. They are stories about people trying to make it big in the vast country throughout various parts of its history. ‘First Cow’ does that too, albeit with more metaphorical and symbolic fervor. To begin with, the tale is filled with a mixture of Western and Eastern characters and this can be interpreted in multiple manners.

Pre-release reviews have been praising the movie’s hypnotic charm that is rooted in the slowness of things. It is a comedy whose lead actors’ chemistry has also been noted by critics apart from its perfect and melancholic portrayal of contemporary America. It is being described as lyrically moving and figuratively stimulating. Read on to find out more about the movie’s plot, cast, crew details and release date.

First Cow Plot: What is it about?

‘First Cow’ is based on a screenplay by Raymond and Reichardt, based on the former’s novel, ‘Half Life.’ It follows the character, Cookie Figowitz who is the cook for a group of four volatile fur trappers. The party is travelling through the Oregon territory in the 1820s. When Figowtiz meets a refugee by the name of Henry Brown, the duo become fast friends and go on an epic territory that takes them all they way to China and back.

On the other hand, Tina Plank is a teenager living one hundred fifty years after the story of Figowitz and Brown. When Plank meets Trixie, the two form a friendship on the basis of the former’s grief and the latter’s troubled past. The lives of Figowitz, Brown, Plank and Trixie get startlingly connected when a couple of skeletons are removed from their common burial ground.

First Cow Cast: Who is in it?

‘First Cow’ stars John Magaro in the leading role, playing the character of Cookie Figowitz. He is an American actor that appears on Netflix’s superhero television series, ‘The Umbrella Academy.’ Moreover, he has also appeared in the prison drama, ‘Orange is the New Black.’ The actor has also starred in movies such as ‘The Big Short’ and ‘Carol’ and other TV shows like ‘The Good Wife,’ ‘Jack Ryan’ and ‘Law & Order.’

Orion Lee plays a character named King Liu in ‘First Cow.’ He is a versatile actor who has worked in television, film and theater too. Lee has appeared in television series like ‘Informer’ and ‘Chimerica’ apart from movies like ‘Narcopolis’ and ‘Justice League.’

Moreover, the prolific actor, Rene Auberjonois who passed away recently is also a member of the movie’s cast. He is best known for playing Father Mulcahy in the black comedy war movie, ‘MASH.’ Moreover, he has also appeared in movies like the 1976 ‘King Kong’ and ‘Cats Don’t Dance,’ television series like ‘Star Trek: Deep Space Nine’ and ‘Boston Legal.’ He has also lent his voice to several video games like ‘God of War’ and ‘Uncharted.’

First Cow Crew: Who is Behind it?

‘First Cow’ is directed by Kelly Reichardt who also wrote the film’s screenplay. The American filmmaker is well-regarded for her spellbinding movies that are often filled with deeper meanings. Her movie, ‘Meek’s Cutoff’ was also set in America during the 19th century while ‘Certain Women’ had depicted slow and isolated life at the countryside. Her other movies include ‘Wendy and Lucy,’ ‘Old Joy’ and ‘Night Moves.’

William Tyler has composed the music for ‘First Cow.’ Meanwhile, Christopher Blauvelt handled the movie’s cinematography and Reichardt edited it. It is being distributed by the independent entertainment company, A24.

First Cow Release Date: When Does it Premiere?

The film is described as a wholesome and charmingly lyrical movie with tons of deeper meaning and symbolism. It might not be your regular cinematic fare as Reichardt handles the tale in her characteristically patient manner that allows characters to breathe and grow, the setting to live and expand and the plot to move effortlessly. The movie’s portrayal of being American is said to be a product of contemporary America’s struggle and hence, is extremely relevant. Plus, it has some important messages like the preference of decency over greed, something which also serves as a critique of the American dream.