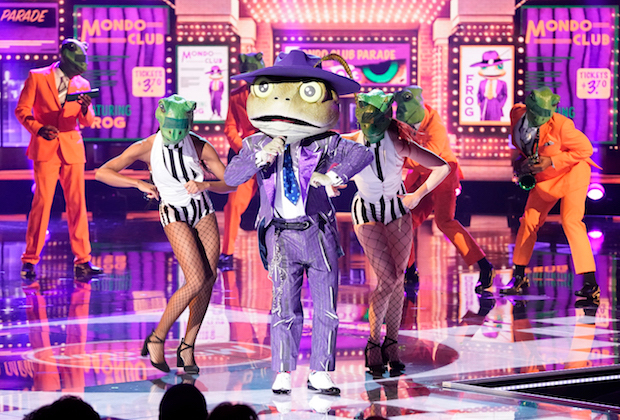 Ever since Frog got up on stage, in ‘The Masked Singer‘, and belted out MC Hammer’s ‘U Can’t Touch This’, the performer has got us on our toes. Combining energy and enigma, Frog is almost a triple threat. Frog can rap, he’s got the moves, and he definitely can work a room full of viewers, and panelists.

He has only proved it again, in his second performance, which is a rendition of 50 Cent’s ‘In Da Club’. Naturally, you might be curious about who is behind the Frog mask. We have got you covered with the clues and guesses about Frog’s identity. However, you can check out the clue package to see if anything jumps out at you. We have also attached the first clue package here.

Frog has given us a host of clues. His first clue package tells us that he is a tadpole plucked from a large creek, and has had to slither with the big frogs to survive. He leapt to stardom like a lightning bolt, and his metamorphosis has not been usual. Among visual clues, we see a microphone with a thumbs-up sign, $106, a bag of leftovers, and the 1996 Olympic Games poster.

In the second clue package, we see a typewriter with the letters C, S, and I, highlighted. We also see a basketball and a star that looks like one on the Hollywood walk of fame. The latter has a $19 tag on it. There is also a line that says “Not Every Frog Wants to be a Prince”.

After his performance, Frog tells us that PE, or physical education, used to be his favorite thing in school, as he likes staying in shape.

Based on these clues, the most likely guess is that Frog is Bow Wow. The performer’s small stature fits the rapper, as do all the clues about starting early and rolling with bigger names. After all, Bow Wow was picked by Snoop Dogg, who gave him this name.

The lightning bolt and the like on the microphone refers to ‘Like Mike’, a movie Bow Wow appears in. The leftovers refer to one of Bow Wow’s albums, ‘Doggy Bag’. The 1996 Olympics took place in Atlanta, where Bow Wow lives now. The $106 also ties in, because Bow Wow can be seen as a host in BET’s ‘106 & Park’.

The second clue package only clinches the deal, as the letters C, S, and I, refer to ‘CSI: Cyber’, a short-lived spinoff, where Bow Wow appears. The basketball could be yet another reference to ‘Like Mike’, while the toy soldiers could refer to ‘Allegiance’, a war movie that stars Bow Wow. The price tag on the fame star might be a nod to ‘The Price of Fame‘, while Frog’s references to Prince might tie in with Bow Wow’s album ‘Prince of Darkness’.

It appears that fans are pretty convinced that Bow Wow is the man behind the Frog outfit. Check out the tweet below.

BOW WOW I KNOW YOURE THE FROG ON THE MASKED SINGER YOU ARENT SLICK LMAOOOO. that $106 dollars gave it away homie ong 😂 i heard yo voice all up in that. @smoss pic.twitter.com/Gf5Ysasw1o

There have been some guesses that it might be Kevin Hart behind the mask. After all, Hart does seem to be energetic enough to pull off Frog’s performance and is rather invested in physical fitness. A fan has tweeted about the same, as you can see below.

One theory that nobody is talking about, is that Frog might just be Eminem. The rapper would definitely be cut out to belt out the songs that Frog has. Moreover, Eminem is around the height of Frog as well. The 1996 poster might refer to the year he put out his debut album, while the toy soldiers we see could literally refer to Eminem’s song, ‘Like Toy Soldiers’.

However, it has been pointed out that Eminem might be much too popular, with a busy schedule to appear on ‘The Masked Singer’. Moreover, the controversial rapper has a decade-long feud with host, Nick Cannon. That being said, we have a feeling it will be a while until Frog’s mask comes off. In the meanwhile, we can try and narrow down the guesses based on other clue packages.