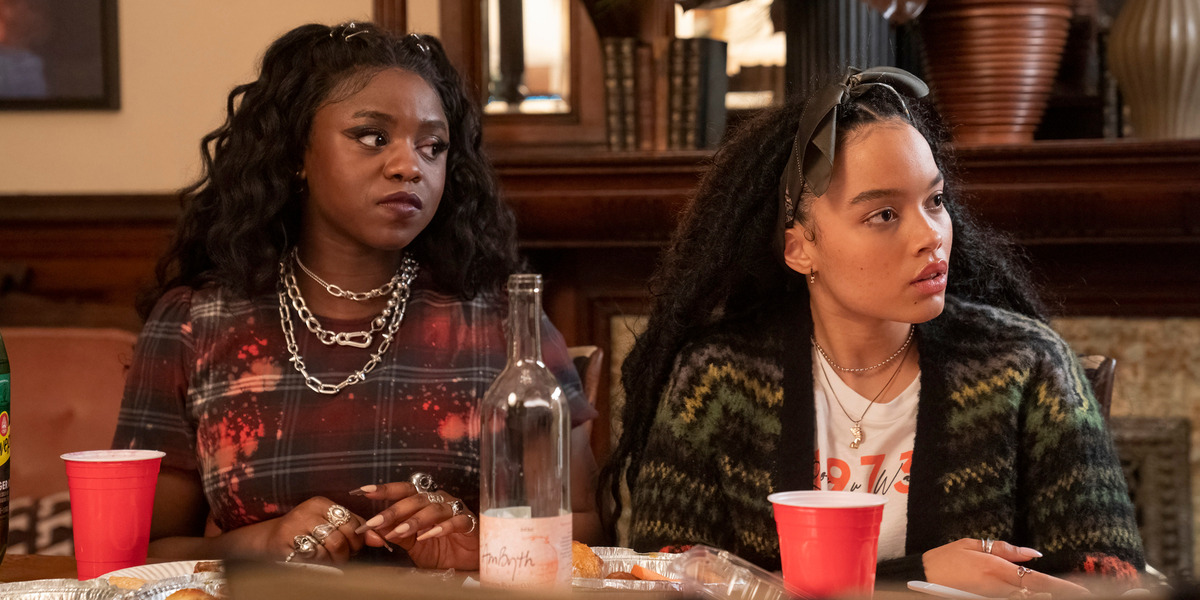 The fourth episode of ‘Gossip Girl‘ season 2, titled ‘One Flew Over the Cuck’s Nest,’ sees Julien and her friends facing the tribulations of love. The valentine’s day themed episode sees Monet throwing a party to celebrate the festival of love. However, infidelity becomes the theme of the night after Audrey, Aki, Camille, and Obie are forced to question their partners’ loyalty. Moreover, secrets lurking in the shadows threaten to pop up, leading to several characters facing the possibility of heartbreak. If you are looking for details about the heartbreaking secrets and whom they concern, here is everything you need to know about the ending of ‘Gossip Girl’ season 2 episode 4! SPOILERS AHEAD!

The fourth episode, titled ‘One Flew Over the Cuck’s Nest,’ opens with Julien returning to social media with a new campaign. She promises to be her true self and wants to give her followers transparency about her life. Although Julien wants to do a tell-all session with Obie, she cannot get hold of him due to their current status as friends. Meanwhile, Obie spends time with Grace before she is slated to move away for her mother’s election campaign. However, Grace is secretly planning to meet someone else. Kate receives an anonymous tip about Monet’s father. The person sends Gossip Girl a picture of Grayson de Haan kissing a mysterious woman.

Kate discusses the tip with Jordan and Wendy. She explains that before posting the scandalous picture, she wants to inform Grayson’s wife, Camille de Haan. Camille is the head of the board overseeing the Constance Billard St. Jude’s School administration. Kate wants to get in Camille’s good books, but her efforts fall flat when Camille is enraged at the accusation against Grayson. Therefore, Kate makes a valentine day themed post hinting at Grayson’s infidelity through the blind item.

Elsewhere, Aki starts acting withdrawn and spends time away from Audrey and Max. As a result, Audrey and Max become suspicious of Aki and decide to find out the truth. Meanwhile, Shan tries to convince Zoya to ask Terrence out on a date. However, only Monet knows his contact information, and she refuses to share it with Zoya and Shan. Grace meets Matias, her ex-boyfriend. Grace’s mother forced her to break up with Matias, but she secretly continued hooking up with him.

Monet feels the pressure of throwing the annual valentine’s day party and plans on making it a VIP affair. However, Luna advises Monet to make the party all-inclusive. As a result, Monet’s public appreciation level will rise, and her peers will love her as much as they love Julien. After speaking to her mother, Monet realizes that the blind item posted by Gossip Girl is about her father. Therefore, she invites Grayson’s mistress, Jennifer, to the party.

Meanwhile, Julien accidentally discovers that Grace is cheating on Obie. However, Audrey advises her not to say anything as it could affect her friendship with Obie. On the other hand, Audrey and max suspect Aki is secretly cheating on them. Therefore, they decide to follow Aki and invade his privacy to learn the truth. Julien arranges a girl’s spa to force Grace into revealing her affair with Matias. However, Grace realizes Julien’s plot but isn’t afraid, as Obie is unlikely to believe Julien after her previous lies.

Mike and Kate attend the valentine’s day party together while Monet resolves to expose her father. Shan invites Terrence to the party after stealing his number from Monet’s phone. However, she hooks up with Terrence after a fight with Zoya. Shan also ends up revealing that Nick bought the apartment with Davis’ help. Meanwhile, Audrey and Max confront Aki after seeing him with another guy at the party. Julien invites Matias as her date to expose Grace’s lies.

At the party, Monet confronts her father after seeing him with Jennifer. She accuses Grayson of cheating on Camille and demands an explanation. However, before Grayson can answer, Camillie shows up and reprimands Monet for making a serious accusation against her father. Monet tries to explain that Grayson is cheating on Camillie and that Jennifer is his mistress. However, Camillie scolds Monet for bringing their family matter into a public place. Ultimately, Camillie reveals that Jennifer is both her and Grayson’s mistress, implying that the couple is into chucking. However, Camillie scolds Monet for questioning her parents and their lifestyle.

Meanwhile, Audrey and Max accuse Aki of cheating on them. Aki is disgusted with the duo invading his privacy and leaves them to be alone. Later, Audrey and max discover that the sex toys Aki bought were not for cheating. After speaking with Aki, they learn that he is feeling nervous about being a bottom in bed. Therefore, he tried the toys and talking to a gay friend to become more comfortable. Ultimately, Aki also wasn’t cheating. He was only trying to take his relationship with Max and Audrey to the next level but did not know how to overcome his nervousness.

Does Obie Learn About Grace’s Affair?

During the party, Julien brings Matias as her date. However, Grace refuses to recognize Matias. As a result, Matias is disappointed and decides to get back at Grace. Obie and Grace dance together while Julien and Matias try to make them jealous. The group uses each other to make their partners jealous, but Grace does not crack.

Ultimately, Julien is forced to call Grace’s mother, Senator Byron, and her brother, James, to the party. Senator Byron identifies Matias as Grace’s ex-boyfriend, leaving Obie devastated. Moreover, Senator Byron also deduces that Grace is selling with her twin brother. As a result, Grace is embarrassed and forced to leave the party. While Julien exposes the truth, it does not help her relationship with Obie.