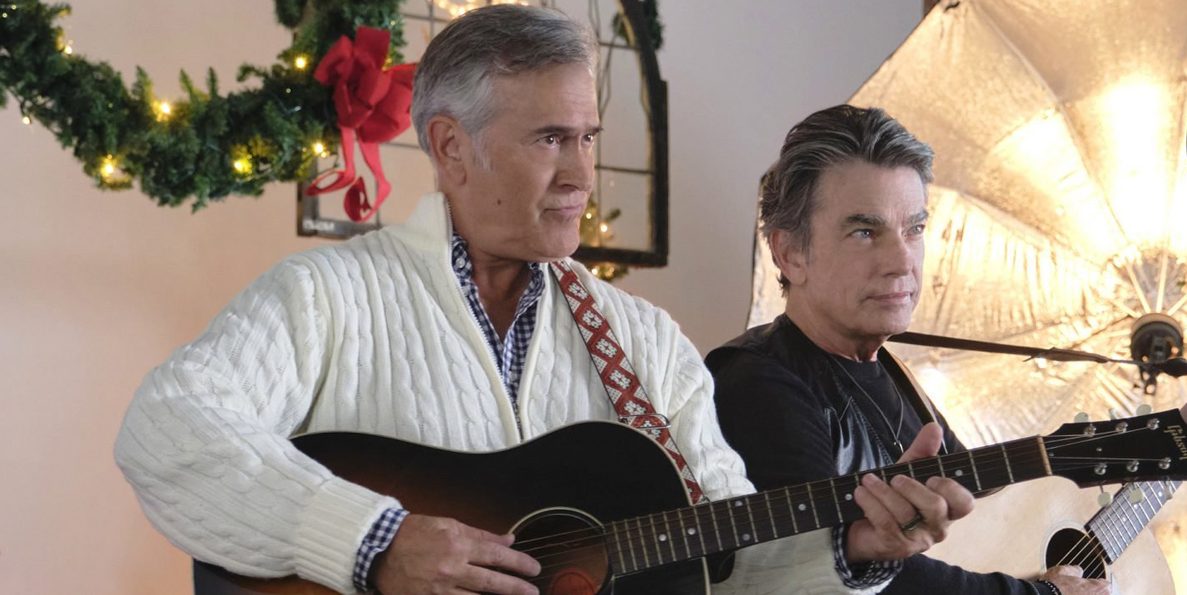 As part of their ‘Countdown to Christmas’ schedule, the Hallmark channel unleashes a bag full of presents for the fans. With Clare Niederpruem on the director’s chair, the festive-themed family drama movie ‘One December Night’ is one of the most uplifting entries on the roster. It follows an ambitious music manager, Quinn, who is directed by her boss to organize a live reunion concert of legendary musician duo Bedford & Sullivan. Quinn returns to her hometown to arrange the concert. However, she has to reconcile with her estranged father, Mike Sullivan, and open old wounds in the process.

As the story goes, the legendary duo broke off their partnership ten years ago, following Mike’s embarrassing exit from a sold-out concert. In the present, Quinn teams up with Bedford’s son, Jason, and navigates the entanglement of memories and miscommunication. The vibrant story centers on themes of friendship, family, and romance, and the festive winter is topped off with some warm music. The film is shot primarily outdoors, which lends it an intimate, small-town makeover. If you feel like revisiting the movie’s locations or learning more about the cast, consider us your ally.

‘One December Night’ was filmed in its entirety in the US, especially in New York. The principal photography took place in September 2021. The movie is set in the fictional town of Pineville, as the director and her crew chose to film in a sleepy New York township instead. When Hallmark productions venture out of the Canadian territory, they generally opt for the northern parts of the US.

The northeastern state of New York features all types of landscapes perfect for pursuing various kinds and degrees of production. The tax credit program offered by the local government also makes the state a prime location for filmmakers and producers. Let us now take you to the precise locations where ‘One December Night’ was filmed!

The entirety of ‘One December Night’ was filmed in Goshen, a peaceful township in the Hudson Valley region of New York. The township is the seat of Orange County and had also hosted the production of another Hallmark movie titled ‘Redemption in Cherry Springs.’ Owing to the warm hospitality of the locals and the beautiful locales that served as the perfect backdrop for this Christmas tale, the crew set up their base near Erie Street and filmed extensively in and around the town.

Goshen seemingly got an early taste of the festive season with decorations, lights, and fake snow. The production team installed a pole that read “Welcome to Pineville,” – and the appendage – “the town of Hudson and Sullivan.” This prop adequately created the myth of the legendary musicians while giving the townsfolk a background to click photos! Locals also served as extras, while the production boosted the economy. Scenes were filmed along Goshen’s Main Street, which was given a festive makeover.

The Computer Guy, a computer repair store located at 2 North Church Street, is showcased in the movie, as is the Bliss Boutique store at 134 West Main Street and the Stagecoach Inn at 268 Main Street. Moreover, local mobile bars and bakeries Parked Prosecco, Crumm Cake CUPCAKES, Milk & Honey Mobile Taps, and Nuzzi’s Tin Tavern were elated to be featured in the movie. The crew also maintained stringent health measures like social distancing and frequent testing for COVID-19.

The crew filmed several scenes in the nearby town of Newburgh. Locations in the area included Downing Park, a picturesque public park located at 181-141 Carpenter Avenue, and 2 Alices Coffee Lounge, a diner situated at 117 Broadway. The team also visited BEAHIVE, a coworking space located at 109 South William Street, and the Newburgh Waterfront. The house featured in the movie is The Big House, situated in the same town by the Hudson River.

The movie features several Hallmark veterans while featuring a plethora of promising talents. Acclaimed star Peter Gallagher plays the role of Mike. He is known for his performances in ‘Zoey’s Extraordinary Playlist,’ ‘Grace and Frankie’ and ‘The O.C.’ Joining Gallagher is ‘The Evil Dead’ and ‘Ash vs Evil Dead’ fame Bruce Campbell, who essays the character of Steve.