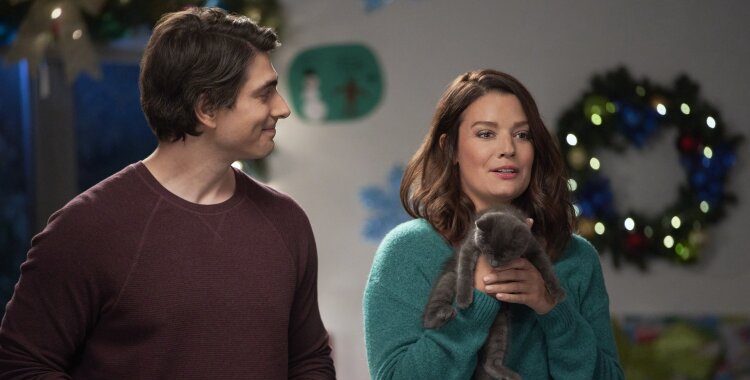 Every year, Hallmark kickstarts their Countdown to Christmas with an interesting list of movies to warm up the holiday season — one of them is ‘The Nine Kittens of Christmas’, a sequel to the much-loved 2014 movie, ‘The Nine Lives of Christmas.’ Directed by seasoned director David Winning, it is a heartfelt tale of love and compassion in the holiday season. Seven years after the events of the first film, veterinary doctor Marilee returns to her hometown and decides to help firefighter Zachary find homes for nine adorable kittens, thus rekindling their romance.

The film is a treat for cat lovers, encourages the concept of animal adoption, and is a depiction of the Christmas spirit. Set in a small town in Canada, the holiday festivities and cheer make a beautiful backdrop for the romantic story of Zach and Marilee. It is a continuation of ‘The Nine Lives of Christmas,’ hence most of the shooting locations are the same. In case you’re curious to know about the places where the movie was filmed, we’ve got your back.

‘The Nine Kittens of Christmas’ was entirely filmed in British Columbia. The filming took place in and around October 2021. British Columbia is a staple location for Hallmark movies due to a vast pool of local talent, a good setup for film production, and considerable tax concessions. These locations also add to the picture-postcard charm of Hallmark productions and are ideal for filming holiday romances like this one. Here’s a further look at the exact filming locations.

The majority of the film was shot at the Fire Hall in Fort Langley in the Township of Langley. Zach is a fireman in the film, and his fire station sequences were filmed at this location. The cast and crew enjoyed returning to shoot in Langley, and even the locals showed their support by having a fun interaction with the film’s production sign which read “Kittens”.

Located at the foot of the Sumas Mountain, British Columbia, this quaint village served as a picturesque shoot location for the movie. Important scenes were filmed at the Clayburn Village Church, which was decked with dreamy Christmas decor. Animal trainer Connie Rusgen who works with the kittens, shared a sneak peek on her social media.

A major portion of ‘The Nine Kittens of Christmas’ was shot in Vancouver, a thriving city in British Columbia surrounded by varied landscapes. Touted as “Hollywood North,” the city is a favorite filming spot for major production houses, and many films like ‘Apollo 18,’ ‘Percy Jackson‘ franchise, and ‘Tomorrowland’ were filmed here.

The Nine Kittens of Christmas Cast

Apart from the nine cute feline actors, Kimberley Sustad returns as Marilee White, a veterinarian who returns to her hometown after trying to make an international career. The talented actress has been a part of many films like ‘A Bride for Christmas’ (2012) and ‘Christmas by Starlight‘ (2020), which she also penned. Brandon Routh also reprises his role of fireman Zachary Stone, who suddenly finds a litter of kittens left in his care and seeks Marilee’s help to get them adopted. The actor is best known for his portrayal of Superman in ‘Superman Returns‘ (2006) and The Atom in the ‘Arrow‘ franchise.

‘North Shore’ (1987) fame actor Gregory Harrison also rejoins the cast as Chief Sam, along with Stephanie Bennett, who plays Jaclyn and Carey Feehan in the role of Kyle. The supporting cast also includes Robyn Bradley was Harriet, Nathan Witte as Miles, Victoria Dunsmore as Gabi, Carey Feehan as Kyle, Helenna Santos as Kate, Vince Song as Caleb, and Linden McMillan as Sierra, among others.