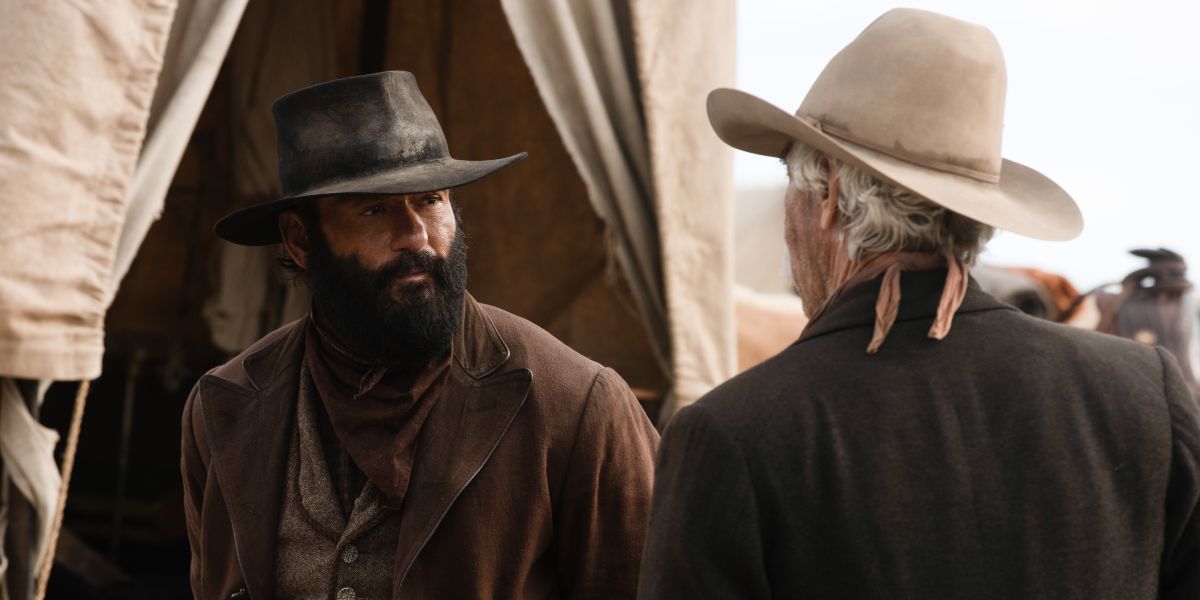 ‘1883‘ follows the Duttons as they travel across the Great Plains in search of a place to call home. The series is a prequel to the hit Western drama ‘Yellowstone’ and details the origin story of the Dutton family’s ancestral Yellowstone Ranch. In the first season finale, the Duttons arrive in Montana in the late 19th century and finally secure the land that will become the home for the Yellowstone Ranch. Thus, the finale sets up the premise for future seasons of ‘Yellowstone’ and the newly announced spinoff series ‘1932.’ If you missed out on the clever nods to the future of Taylor Sheridan’s ‘Yellowstone’ universe, we’ve got you covered! Here’s how the ‘1883’ finale sets up ‘Yellowstone’ season 5 and ‘1932.’ SPOILERS AHEAD!

In the season 1 finale of ‘1883,’ James Dutton and his family arrive in Montana, where they meet Spotted Eagle, the leader of a Native American tribe. Spotted Eagle sees that Elsa is gravely injured and tries to treat her with the methods of his tribe. However, it soon becomes clear that Elsa’s death is inevitable. Therefore, James decides to find a place where Elsa can be buried. The family plans on making Elsa’s resting spot their new home. Moreover, Elsa wants to choose her resting spot while she is alive. Therefore, James is running out of time to find suitable land.

When Spotted Eagle learns of James’ plight, he guides the Dutton patriarch to Paradise Valley. However, Spotted Eagle warns James that his family members will rise after seven generations and seek to take the land back from James’ descendants. Additionally, James must allow the tribe’s people to hunt for food in the land. James agrees to the terms and heads to Paradise Valley with Elsa. Elsa dies on the land that will one day become the Yellowstone Ranch.

In the present, as of the fourth season of ‘Yellowstone,’ the Dutton family is in its sixth generation. The current patriarch John Dutton (Kevin Costner), is the great-grandson of James Dutton. John’s grandson, Tate, is the sixth generation Dutton family member. However, the Duttons are facing various issues in keeping hold of their property and often have conflicts with the Broken Rock Reservation, a Native American community. Therefore, it seems like the events foretold by Spotted Eagle are already beginning to materialize. Thus, ‘1883’ finale sets up a major conflict between the Duttons and the Native Americans that could potentially unfold in the upcoming fifth season of ‘Yellowstone.’

Secondly, the season 1 finale has seemingly also set up the premise for ‘1932,’ a new spinoff series set in the 20th century that will follow a new generation of Duttons as they navigate various issues. By 1932, James is long gone, and his family members and successors could forget his promise to Spotted Eagle. For the Duttons, the land is an extension of their family. This ideology likely stems from Elsa’s death and burial. Therefore, in their bid to protect the land they hold dear, the Duttons in ‘1932’ could end up breaking the promise to Spotted Eagle, thereby creating a conflict for the Duttons in ‘Yellowstone.’

Read More: Are James and Margaret Dutton Leaving 1883? Will Tim McGraw and Faith Hill be in Season 2?