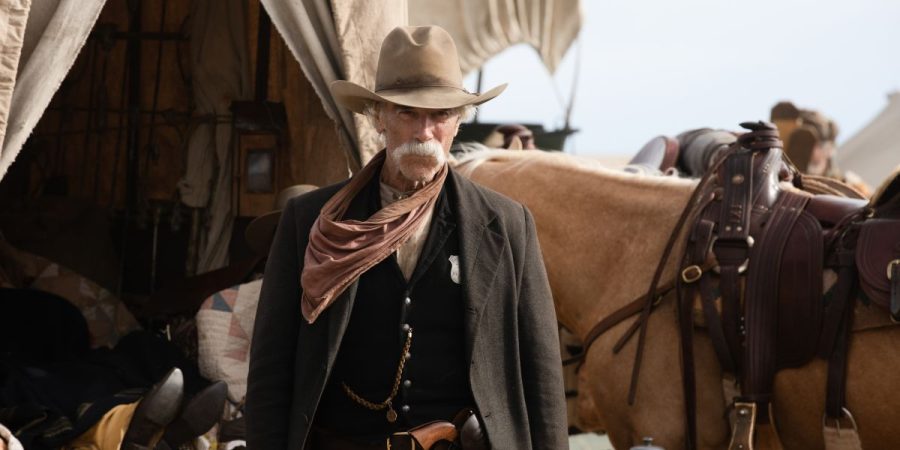 The caravan’s journey comes to an end in the first season finale of ‘1883.’ The enthralling season ends with the Duttons arriving at their final destination. However, the price they pay for the place they ultimately settle down in will shape the family’s ideology for generations to come. Meanwhile, the other members of the wagon camp must also make important decisions that will lead them to their own destinations. Naturally, viewers must be curious to find out about the fates of fan-favorites such as Elsa, Shea, and Thomas, among others. If you are looking for a detailed rundown about the finale’s events and ending, here’s everything that happens in ‘1883’ episode 10! SPOILERS AHEAD!

The tenth episode of ‘1883’ is titled ‘This Is Not Your Heaven.’ It opens with the caravan arriving at Fort Caspar. Elsa falls unconscious and is rushed to the camp’s doctor. However, an army man serving as a medical aid at the camp explains that he can not treat Elsa. Moreover, she can not travel to a different camp as the infection is spreading. Elsa is running out of time, and even if she receives treatment, the chances of recovering a meager. Shea realizes that the Major and other locals are connected to the Wyoming Stock Association, whose members Shea and the others killed for stealing horses.

Thus, James decides to find a resting place for his daughter while she is alive so that his family can make it their home. The rest of the caravan disbands after the immigrants refuse to follow Shea and James as they do not want to settle down in Montana. Except for Risa and Josef, the immigrants part ways with the caravan. Shea relives Wade and Colton of their duties, and the duo rides into the sunset. James, Shea, Thomas, Margaret, John, Elsa, Noemi, Josef, and Risa continue moving towards Montana. On route, they run into a group of Native Americans led by Spotted Eagle.

The Native Americans help Elsa ease the pain of her injury while Spotted Eagle speaks with James. He directs James to the Paradise Valley, promising that James can find land to bury his daughter in the valley. However, the spot is far away, and it will take a week to reach there by wagon. Therefore, James decides to ride with Elsa on horseback to choose her resting spot on the land. After a tearful goodbye with Margaret, James leaves with Elsa. The father and daughter share a final heart to heart before fate intervenes and the inevitable happens.

1883 Finale Ending: Is Elsa Dead? Where Do the Duttons Settle?

James and Elsa spend time by a tree in the episode’s final moments. James shares his first memory of life with his daughter. Elsa also shares her first memory and falls asleep. When Elsa wakes up, she finally accepts her fate and dies in James’ arms. Elsa’s death serves as the foundation of the Yellowstone Ranch that will become the Duttons’ dynasty in the future. Furthermore, it confirms that the Duttons settle down in the Paradise Valley and make it their new home. However, for now, James gives the loss of his daughter. In the end, Elsa narrates the culmination of her journey through a voice-over. She explains that after dying, her memories and dreams merge to form heaven for her.

In the final scene, we see Sam waiting for Elsa. Elsa arrives, and the two have another race that serves as ac all back to their first meeting. The scene implies that Elsa is now in the afterlife and has found peace. Instead of riding into the sunset, a classic ending for cowboy stories, Elsa rides into broad daylight with her love. In the final scene, Elsa exclaims that death is also beautiful, thereby proving that even death could not break Elsa’s undying spirit for admiring the beauty of her surroundings. Thus, Elsa’s journey comes full circle, and the season ends on a satisfying note.

Shea and Thomas embark on the quest of guiding the immigrants to Oregon in the series premiere episode. Shea’s tragic past and Thomas’ longing for a sense of belonging shape their character arcs over the season. The rugged cowboys navigate all the dangers on the road, but after the immigrants part ways, the two are left to decide their own future. While they remain with the Duttons until James leaves with Elsa, we get a clear answer about the fates in the epilogue scene set a year after Elsa’s death. Thomas reaches Oregon with Noemi and her children. They appear to be a happy family and are preparing to settle down in the state.

Elsewhere, Shea visits the beach and fulfills the promise he made to himself, thereby honoring his late wife’s memory. After spending a quiet evening by the seashore and seeing a bird that reminds him of Elsa, Shea shoots himself. Thus, Shea’s journey comes to an end. One can only hope he reunites with his family in the afterlife.

Lastly, the immigrants run into the horse thieves after parting ways with the caravan and are killed in the skirmish. They have no way of defending themselves without the cowboys, and their decision to leave the group proves to be their grave mistake. Among the immigrants, only Josef reaches Oregon, but his wife, Risa, dies on the way. He loses a leg due to the snakebite, which further reiterates the costs the Pioneers paid for reaching the Virgin Frontier.

Read More: What Route Do the Duttons Take in 1883, Explained