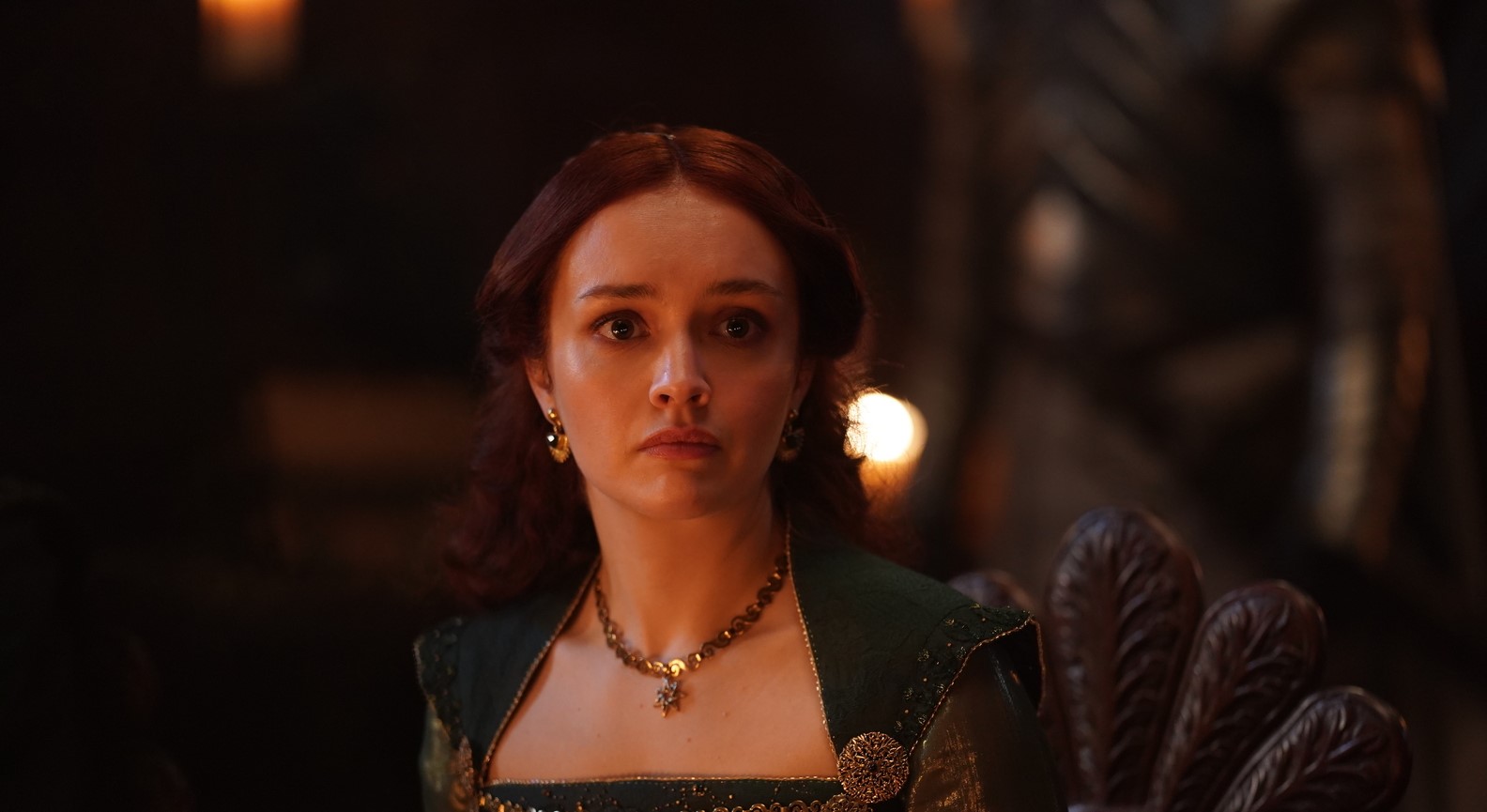 Like its predecessor ‘Game of Thrones,’ ‘House of the Dragon’ is steeped in violence and ambition. Based on certain sections of ‘Fire & Blood,’ the 2018 descriptive novel by George R. R. Martin, ‘House of the Dragon’ tells the story of a brutal civil war between two factions of the ruling Targaryen dynasty — the Blacks and the Greens. In the widespread carnage, the realm suffered, the titular family was nearly wiped out, and the dragons went all but extinct. The war marked the beginning of the end of the Targaryen rule in Westeros.

Alicent Hightower (Olivia Cooke as adult and Emily Carey as teenage) is a leading figure among the Greens. She is the second wife of King Viserys I Targaryen (Paddy Considine) and mother to several members of the next generation of royalty, including Aegon II (Tom Glynn-Carney), Viserys’ eldest living male child. If you are wondering whether Alicent is related to Daenerys Targaryen (Emilia Clarke), one of the main characters in ‘Game of Thrones,’ we got you covered. BOOK SPOILERS AHEAD.

‘Game of Thrones’ is based on Martin’s ongoing magnum opus, ‘A Song of Ice and Fire’ book series, of which ‘Fire & Blood’ is a prequel. In-universe, ‘Fire & Blood, Being a History of the Targaryen Kings of Westeros’ is a yet-to-be-finished book by Archmaester Gyldayn of the Citadel of Oldtown. The first volume covers the years between the reign of Aegon I or Aegon the Conqueror and the regency of Aegon III or Aegon the Dragonbane. ‘House of the Dragon’ (or at least its first few seasons, as the creators intend to turn the show into an anthology series going backward and forward in time) covers an event known as the dance of the dragons, as both factions use dragons in the conflict, or the dying of the dragons, as dragons seemingly become extinct shortly after the war is over. Nearly 200 years later, Daenerys brings them back after climbing into her husband’s funeral pyre.

To answer the question of whether Alicent is related to Daenerys, we have to go through the Targaryen family chart. This is, of course, based on the books; the series can take a different path. Alicent and Viserys had four children together, Aegon II, Helaena, Aemond, and Daeron. Among them, Daeron, the youngest, died under mysterious circumstances at the Second Battle of Tumbleton in 130 AC. With his body never being identified, multiple people came forward pretending to be him. Maester Yandel, the author of the in-universe ‘The World of Ice and Fire,’ writes that all these claims were proven to be false. At the time of his death, Daemon was at around 16 years of age and childless.

Aemond died at the Battle Above the Gods Eye in 130 AC along with his dragon Vhagar, the largest Targaryen dragon of its time. He allegedly had a son with his paramour Alys Rivers. The legitimacy of the child is ultimately immaterial, especially while trying to answer the question that we are, as the said child never became part of the main Targaryen line.

Following the Targaryen tradition, Aegon II and Helaena were married to each other. They had three children: Jaehaerys, Jaehaera, and Maelor Targaryen. Jaehaerys, Aehon’s eldest son and heir, was killed in 129 AC in retribution for the death of Prince Lucerys Velaryon. Maelor was killed when he was three years old in 130 AC. Helaena became deeply traumatized after the incident where her son Jaehaerys was killed. In 130 AC, she died by suicide by jumping from the window of Maegor’s Holdfast. Aegon II perished in 131 AC. He had blood on his lips.

To put an end to the civil war and the bloodshed, Jaehaera was married to Aegon III, the son of Rhaenyra Targaryen (Emma D’Arcy as adult and Milly Alcock as teenage) and Daemon Targaryen (Matt Smith). Alicent was vehemently against the match. She died in 133 AC. Unfortunately, Jaehaera didn’t survive her grandmother for long. She reportedly died in the same way as her mother, by jumping from the window of Maegor’s Holdfast and being impaled on the spikes below. However, there had been speculations that Jaehaera’s death was orchestrated by Lord Unwin Peake, the then Hand of the King. Jaehaera was only ten years old when she died, and the Targaryen line of Viserys I and Alicent ended with her. While Aegon II did have several children out of wedlock, like Aemond’s alleged son, they were not part of the main Targaryen line.

So, to conclude, Alicent and Daenerys are not directly related in the books. Daenerys was born in the line of Aegon III and his second wife, Daenaera Velaryon.

Read More: Is Emilia Clarke’s Khaleesi in House of the Dragon?